Propulsion systems that could carry astronauts to Mars and beyond. 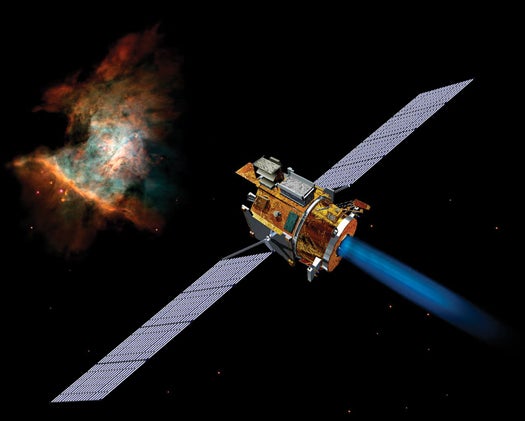 The fastest chemical rocket ever, the Star-48 engine was built to launch satellites and was recently incorporated into the New Horizons probe, which took off in 2006. Powered by burning a mixture of ammonium perchlorate and aluminum, it boosted the Pluto-bound probe to approximately 36,000 miles per hour. New Horizons should reach Pluto and its moons by July 2015.
First Used For Propulsion 1980

Ion thrusters rely on electromagnetic effects to accelerate charged particles out the back of a spacecraft, generating propulsive force. Up to 50 times as efficient as chemical rockets, they are now primarily used for satellite station-keeping. NASA’s Deep Space 1, launched in 1998, was the first probe to use an ion engine for main propulsion. Dawn, which is currently exploring the asteroid belt, also uses one.
First Used For Propulsion 1998

Like regular sails that gather momentum from wind, solar sails rely on the momentum of sunlight. Only a handful have been tested in space so far, including the Japanese Ikaros, a private effort called LightSail, and NASA’s NanoSail-D. Scientists are working on creating lighter materials and more reliable deployment methods, both of which could boost speeds.
First Interplanetary Flight 2010

Probably the fastest propulsion system scientists could build right now, external pulsed plasma propulsion would explode hundreds of nuclear weapons behind a spacecraft. The ship would ride in front of the shock waves. The idea was first studied in the late 1940s, and, technically, it could work. But implementing it is tricky: Launching a spaceship loaded with hundreds of nuclear weapons is far from safe.
Concept Tested 1957

Much like a regular rocket with a more efficient heat source, fusion rockets would heat fuel and shoot it out the back. Scientists have been toying with the idea since the British Interplanetary Society’s Daedalus study in the 1970s. Recently, scientists in Project Icarus, an update of Daedalus, reimagined the fusion rocket with more modern techniques. But until researchers get fusion to work well on Earth, the rockets remain far-fetched.
Projected Readiness Date 2030

The only technology that would, in principle, cross the otherwise sacrosanct barrier of light speed, warp drive would use large amounts of negative energy to create a bubble in space-time. It would contract space-time in front of a craft and expand it behind. Instead of traveling through space, a warp-enabled craft would, in a sense, travel on space, riding the space-time deformations.
Projected Readiness Date TBD

Read the Popular Science_ profile of NASA engineer Harold “Sonny” White and his research into warp drives here, from the April 2013 issue of the magazine._