And they're about 10 billion times more precise than your quartz wristwatch. 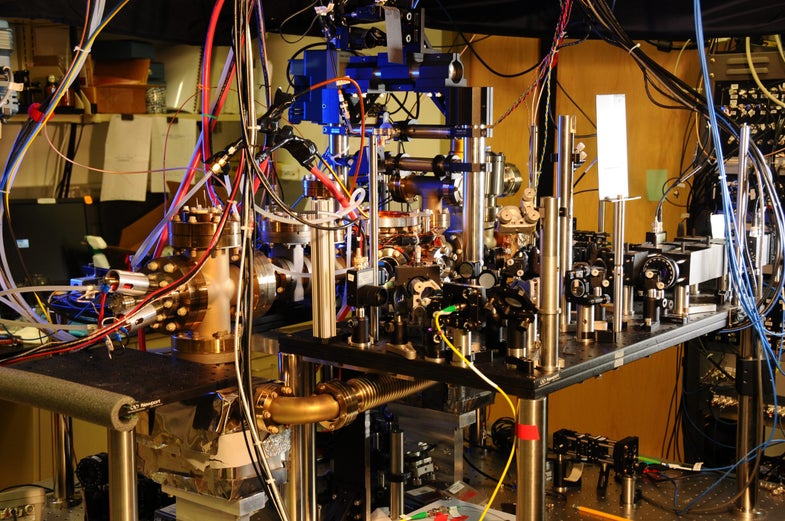 At the foot of the mountains abutting Boulder, Colorado, in the labs of the National Institute of Science and Technology, there sits the most precise clock in the world.

It’s so precise that, because it outstrips other atomic clocks, its creators weren’t able to measure its precision until recently, when they built a second version of it. Now, with the two available to compare with one another, they’ve come up with a number for the clocks’ precision, which clock physicists call the clocks’ stability.

“Clock stability is a term we use in the field that basically refers to—if you look at the ticking rate of the clock, how much does that ticking rate change over time?” Andrew Ludlow, a NIST Boulder physicist who works on improving the lab’s atomic clocks, tells Popular Science. “Ideally, you want every tick to be exactly the same as the other.”

The NIST Boulder clocks are made with technology a generation beyond that used in cesium atomic clocks. They happen to use atoms of ytterbium, a rare Earth element, but other next-generation clocks around the world use other elements, such as strontium and mercury.

These next-generation clocks could be used to measure some pretty cool effects in fundamental physics. For example, Einstein’s theory of relativity has been devilishly difficult to prove experimentally. A NASA satellite measured the warping of space and time around Earth just in 2011. Next-generation atomic clocks, however, could measure the effects of relativity right here on Earth.

The NIST clocks are optical lattice clocks, which means they have an intense laser field that holds about 10,000 ytterbium atoms in place. Another laser excites the atoms, the movement of which is how the clock measures time. Exciting the atoms with a laser makes them vibrate at higher frequencies than atoms in cesium atomic clocks do. So optical lattice clocks tick faster and are able to tick off more precise units of time. Having so many atoms in the clock helps average out the uncertainties from any one atom.

So the NIST ytterbium optical lattice clocks are the most precise in the world, a record Ludlow and his colleagues published today, in a paper in the journal Science. What about accuracy, or the clocks’ measure of time against the true time? To measure a clock’s accuracy, scientists try to measure all of the things in the world that could alter the clock’s atoms, such as changing temperatures or the laser lattice’s effects on atoms.

The last time Ludlow and his team did this for the ytterbium clock was in 2009, when they found it was as accurate as a cesium atomic clock. They are now working on measuring accuracy again. As for the most accurate atomic clock in the world, it’s also located in NIST Boulder and is called an aluminum quantum logic ion clock.