It's not a cure, but researchers hope inserting a few genes into T cell receptors can keep HIV cells at bay. 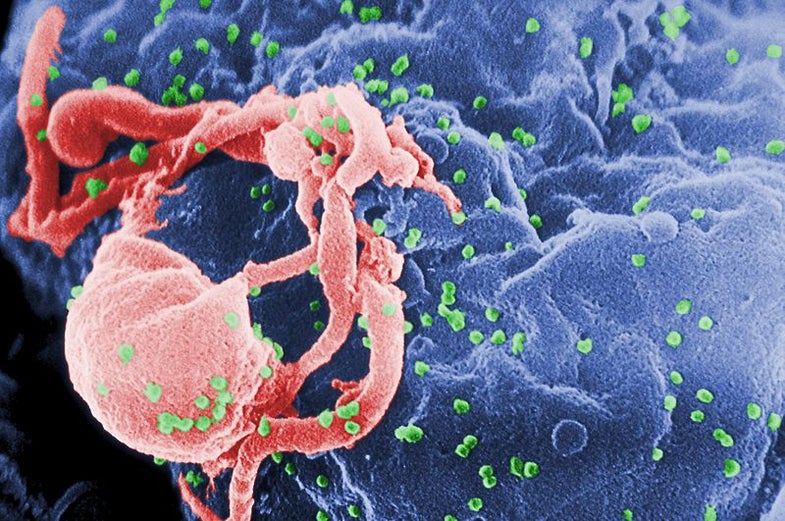 Researchers at the Stanford University School of Medicine and their collaborators elsewhere have opened up a new front in the war on HIV/AIDS. Using the tools of the geneticist to insert a series of HIV-resistant genes into T cells–the body’s immune cells that are actively targeted by HIV and AIDS–researchers have a found a potent means of fending off HIV cells that would otherwise inhabit and destroy the cells.

HIV and AIDS are usually treated through a cocktail of antiretroviral drugs that essentially attack the viruses at various phases of their replication processes. Because the lifecycle of HIV/AIDS is so short (just a few days, if that) it can mutate quickly as it replicates, so this kind of therapy usually involves a complex combination of drugs–many of which carry undesirable side effects.

This new gene therapy attempts to choke off HIV replication at the point the virus tries to infiltrate a healthy T cell, keeping that T cell healthy and denying the virus its chance to replicate–at least via that particular T cell. The virus usually gains access to the T cell by attaching itself to surface proteins known as CCR5 and CXCR4 (different strains of the virus target different surface proteins). Researchers have previously been able to deactivate the receptor protein CCR5 by developing a special protein that attaches to it and smashes its receptor gene, rendering it inactive for HIV’s purposes.

The Stanford team’s technique does the same thing but also goes a step further. It uses the same protein to target the DNA that lends the CCR5 its receptor status. But rather than simply smashing that DNA, this protein breaks the DNA sequence and inserts a few new genes in there that are known to express resistance to HIV. This technique of placing certain genes within the genome is known as “stacking,” and it’s the secret sauce in the Stanford team’s anti-HIV recipe.

It’s important to note that this isn’t a cure or a vaccine. But it is a way to insert a group of healthy, resistant T cells into an HIV/AIDS patient to stave off immune system collapse–and do so without a heavy regimen of antiretrovirals. There are certainly potential drawbacks–tinkering with genomes always carries the risk that something could go wrong, leading to cellular aberrations (like cancer). And it’s not necessarily easy to ensure that the protein delivers the resistant genes to the right place in the genome.

Nonetheless, the team plans to keep working on its technique, and the hope is to get into clinical trials within five years. We haven’t quite arrived at a cure, but we’re certainly getting closer.