The Case Of The Girl Who Couldn’t Feel Pain

A team of European researchers finds the genetic mutation responsible for a subject's inability to feel pain. 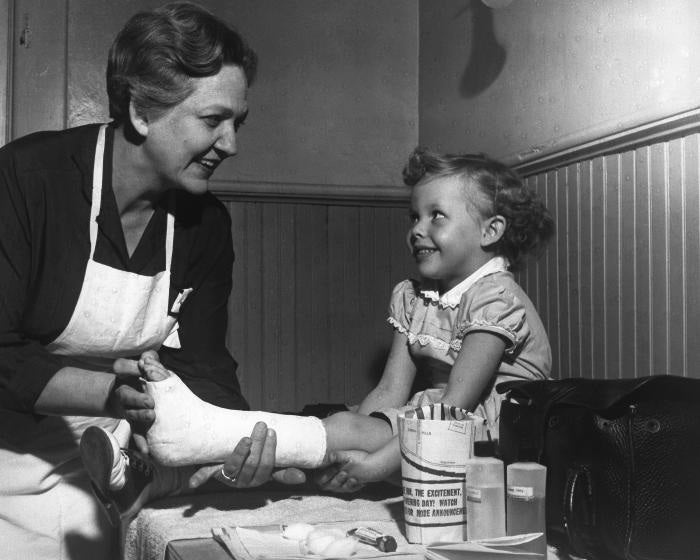 “Index Subject 1″—the anonymous girl or woman who participated in this new study—is unusual in a couple of ways. For one thing, she cannot feel pain. It’s a dangerous condition for her. Photos published in a paper about her show severe injuries to her head, face and knee, the latter of which she has fractured multiple times.

For another, she has a super-rare gene mutation, which the scientists couldn’t find in any of the human genome databases they scoured. That gene mutation, the researchers think, is what protects Index Subject 1 from pain.

Index Subject 1’s story is a cool bit of genetic sleuthing. It could also help her in the future: If a single mutation really is the root of most of her symptoms, then researchers could come up with a drug to target the specific protein her mutated gene makes. Her gene could also be a target for future painkillers for others’ chronic pain. However, there’s no immediate solution for her in this study, nor for the anonymous male the researchers later found who had the same mutation as she did.
Researchers compared Index Subject 1’s genes with several human genome databases. They found just one genetic mutation that appeared in her, and nobody else.

Index Subject 1’s research team—including scientists from Belgium, Sweden, and her home country, Germany—found her mutation by analyzing the genomes of both her and her parents. The researchers compared the family’s genes with several human genome databases, such as “1,000 Genomes,” which includes all the genes of 1,092 people from 14 populations. The scientists found a single genetic mutation that appeared in Index Subject 1, but nowhere else.

The mutation affected a gene called SCN11A, which makes a protein that controls how much sodium goes in and out of cells in the human body. That’s a small job, but an important one. Nerves have many of these sodium channels, and they use their interior sodium concentrations to decide whether to send a signal—to pass on a message of pain, for example, or to call up a memory. The particular type of sodium channel that was mutated in Index Subject 1 is abundant in nociceptors, the types of nerves that sense pain. Sounds pretty relevant, right?

The researchers then analyzed the genes of 58 people with reduced pain perception. They found one boy or man, Index Subject 2, who had the same mutation as Index Subject 1. He also had many of the same symptoms. Both had never been able to feel pain since birth. Both frequently hurt themselves, even fracturing their bones multiple times. Their wounds healed slowly, their muscles were weaker than normal, and they had severe digestive trouble, sometimes requiring IV feeding.

To check that this mutation was truly behind Index Subject 1 and Index Subject 2’s symptoms, the researchers put the mutated gene into lab mice. Out of 101 mice in which they added the SCN11A mutation, 11 gave themselves self-inflicted wounds. When researchers injected the mice with a chemical that made the paws swell up, the mutated mice didn’t protect the swollen paw the way normal mice do. The mutated mice were able to withstand much higher temperatures before showing discomfort, compared to normal mice. And their bowels didn’t move as well as normal mice’s.

All this is evidence that Index Subject 1 and 2’s medical problems truly do come from this single mutation—an unusual event in genetics, where disease often stem from the interactions of many genes. We hope this means a treatment will be relatively easy to find.

The European research team published their work in the journal Nature Genetics.