FYI: How much caffeine would it take to kill you?

A lawsuit over the death of a 14-year-old girl raises new questions about how much caffeine is too much--and what other nefarious factors might come into play. 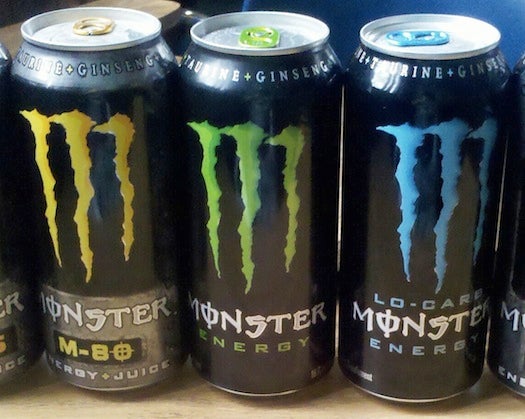 A wrongful-death lawsuit filed last week against the makers of Monster energy drinks claims that 14-year-old Anais Fournier drank two 24-ounce cans of Monster in the day before she unexpectedly died late in 2011. The coroner’s report described “caffeine toxicity” as contributing to her death. Just what does it take to ingest a lethal dose of caffeine?

The answer is hard to pin down, in part because it happens so rarely, but it’s clearly a hell of a lot. In an email, Jack James, the editor-in-chief of the Journal of Caffeine Research, says that overdose for adults requires roughly 10 grams of caffeine. (People typically ingest just 1 to 2 mg/kg of caffeine per beverage.) A 2005 Forensic Science International article on two fatal caffeine overdoses in New Mexico pegs the figure closer to about 5 grams–an amount that would still require drinking more than 6 gallons of McDonald’s coffee. Whereas a normal cup of coffee might bring the concentration of caffeine in your plasma to 2.5 to 7 mg/L, the two people who died in New Mexico–a woman who might’ve used caffeine to cut intravenous drugs, and a man whose family said he ingested a bottle of sleeping pills–both had concentrations 100 times higher. (A web application called “Death By Caffeine” uses a benchmark around 6 grams per hundred pounds of body weight to estimate death, but it’s “for entertainment purposes only.”)

So if a true caffeine overdose is so rare, why has caffeine–perhaps the most widely used drug in North America–been blamed for contributing to a handful of deaths over the years? Perhaps because it almost always works in concert with other far more nefarious factors such as alcohol or heart conditions. Indeed, the suit filed in California points out that Fournier suffered from Ehlers-Danlos syndrome. According to the autopsy report, the cause of death was a cardiac arrhythmia that the caffeine brought on. But the arrhythmia was also complicated by “mitral valve regurgitation in the setting of Ehrlers-Danlos syndrome,” which affects collagen synthesis and thus multiple body systems, including the cardiovascular system.

“Caffeine toxicity of the kind experienced by Ms. Fournier (if, indeed, that is what she experienced) is not well understood,” James says. “There is speculation in the literature regarding the possibility of some individuals having a peculiar sensitivity to caffeine, but there is no clear definition or understanding of what such sensitivity might be.”

One thing is clear: Anais’s caffeine intake simply would not be harmful for most people. Two cans of Monster each contain 240 mg of caffeine, which the lawsuit equated with the caffeine of 14 12-oz. cans of Coca-Cola. While drinking 14 Cokes sounds positively disgusting, the caffeine therein is actually well within the bounds of what many people consume in a day. For instance, Starbucks Pike Place coffee would deliver that 480 mg of caffeine with just 24 ounces of joe. As Mark F. McCarty, an applied nutritionist in San Diego, said: “I don’t see another case of a child who died from acute exposure to the equivalent of four coffee cups of caffeine. That strikes me as extremely rare. I can’t imagine that Monster was worried about this, because there’s nothing in the literature to suggest this would happen.”

That’s not to say there aren’t close calls, especially in children. A girl in Ohio suffered seizures, heart problems and fluid in her lungs after she ate her mom’s diet pills, containing 2 to 3 grams of caffeine (the equivalent of eight or 12 cans of Monster). She was transported by helicopter to the pediatric hospital in Columbus and survived, despite the high dose and her age: just a year old. In another instance, a 16-year-old boy in Toronto ingested something like 6 or 8 grams of caffeine (25 to 33 Monsters) via 30 or 35 pills called “pink hearts.” He suffered chest pain, elevated blood sugar and irregular heartbeat, but was treated and survived. The physicians who published on the case noted: “On examination, he was alert, oriented, nervous, agitated and irritable”–exactly how you’d imagine a teenager on way too much caffeine.

Energy drinks, though, might be raising the stakes. “In the past it was generally accepted that it is virtually impossible for a normal, healthy person to consume a lethal dose of caffeine when taken in one of its usual dietary forms,” James says. “Nevertheless, of the many thousands of cases of caffeine exposure registered with the American Association of Poison Control Centers alone, some do indeed result in death. Until the advent of energy drinks, essentially all of the many reports of lethal and near-lethal cases of caffeine poisoning, involved atypical methods of ingestion. The advent of energy drinks appears to have changed that profile.”

Caffeinated energy drinks are designed for, and marketed to, children, with the aim of recruiting long-term consumers.

A 2010 study analyzed seven years of databases from Australian poison information centers, and found nearly 300 callers reporting “exposure” to energy drinks, often in tandem with alcohol or other caffeine sources, that led to symptoms such as hallucinations, seizures and arrhythmias. At least 128 of those people were hospitalized. In the United States in 2010, about 150 people were treated for exposure to energy drinks, according to American Association of Poison Control Centers statistics (pg. 130); coffee is nowhere on the list. This year, toxicologists in Boston recommended further study on the “novel exposure” that is energy drinks, citing ingredients such as taurine, niacin and pyridoxine as potential targets. Caffeine may be the star in most energy drinks, but among so much chemical detritus, it’s hardly the only stimulant in play.

All of which raises the question, for James, of why drink manufacturers even include caffeine in energy drinks, which he describes as having stimulant benefits that range from marginal to nonexistent. “Manufacturers know that repeated consumption of caffeine leads to physical dependence,” James wrote. “… The more recent bevy of caffeine energy drinks and sodas are specifically designed for, and marketed to, children, with the aim of recruiting long-term consumers of those products.”

Including caffeine in soft drinks and energy drinks piggybacks on the dependence that coffee, tea, cola and chocolate have created with their natural caffeine content. The effect most people conflate with caffeine stimulation, James wrote, is primarily “withdrawal reversal,” which lends the sensation of a small high when, in reality, “the person is merely restored to how they would have been feeling had they not been a caffeine consumer in the first place.”