Put The Science Of Umami To Work For You 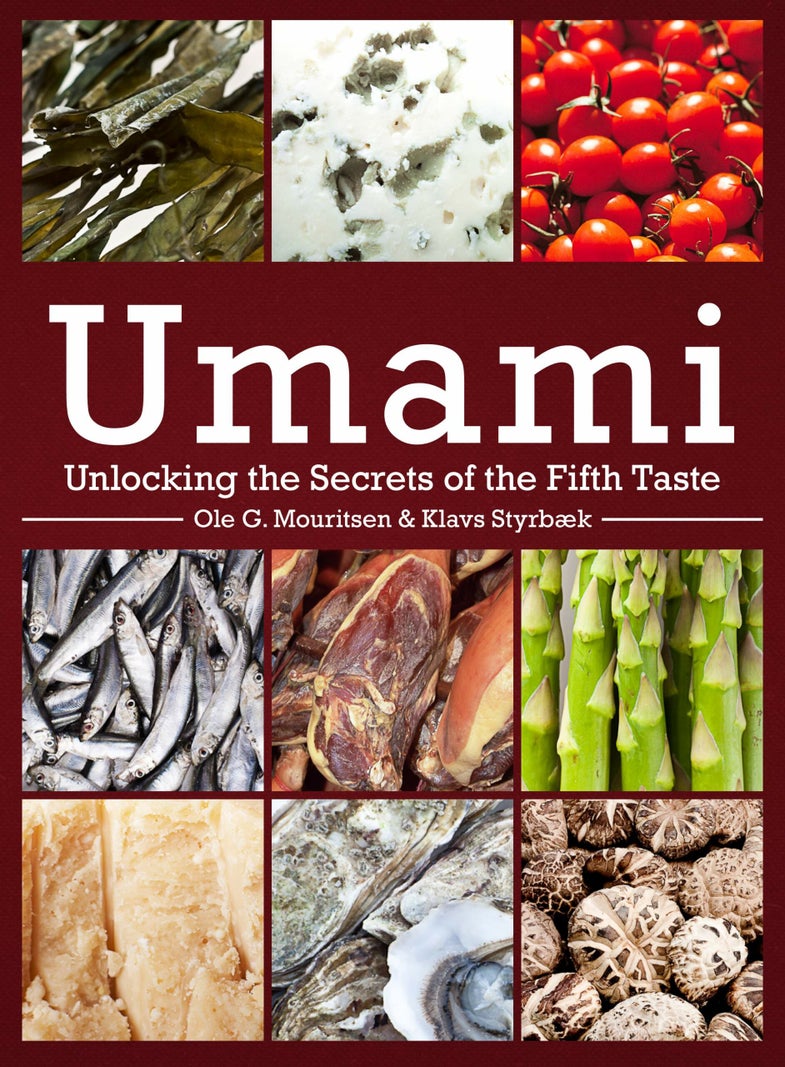 In 1800, Dunand, chef to Napoleon Bonaparte, celebrated the French army’s victory at the Ligurian village of Marengo by inventing a new dish: a stew of chicken sauteed with tomatoes and garlic and served with crayfish and eggs. The dish so pleased Napoleon, the story goes, that he commanded it be served after every battle he fought.

Setting aside its probably fictitious provenance, Chicken Marengo is “a classic study in umami,” Ole Mouritsen says. He is a professor of molecular biophysics at the University of Southern Denmark, and he is spending an evening with a group of somewhat tipsy Brooklyn food enthusiasts in the basement of a converted factory in Williamsburg, where umami-centered snacks are served while he explicates them.

“Tonight I’m going to unlock the secret of umami,” the tall, round-featured Dane murmurs into a microphone, over the sound of a few dozen hands rummaging in little bags of popcorn seasoned with capers and brown butter. “And it’s the same secret you need when you do the tango.”

An elegant synergistic technique makes cooking with umami an act of pair choreography.

Between the battle of Marengo and today, the so-called fifth taste, which is the subject of a book by Mouritsen and a Danish chef named Klavs Styrbaek, has come far. In 1908, a Japanese chemist, Kikunae Ikeda, first set out to analyze just what made seaweed broth — the dashi that forms the basis of much Japanese cooking — so delicious. In his laboratory at the University of Tokyo, Ikeda brewed 26 pounds of dried kombu seaweed into broth, and looked at each chemical component of the broth in turn. He was able to isolate about an ounce of one particular crystal that embodied the unique flavor of the dashi. The crystal was monosodium glutamate, and Ikeda’s coinage to denote its distinctive sapid taste, “umami,” stuck. 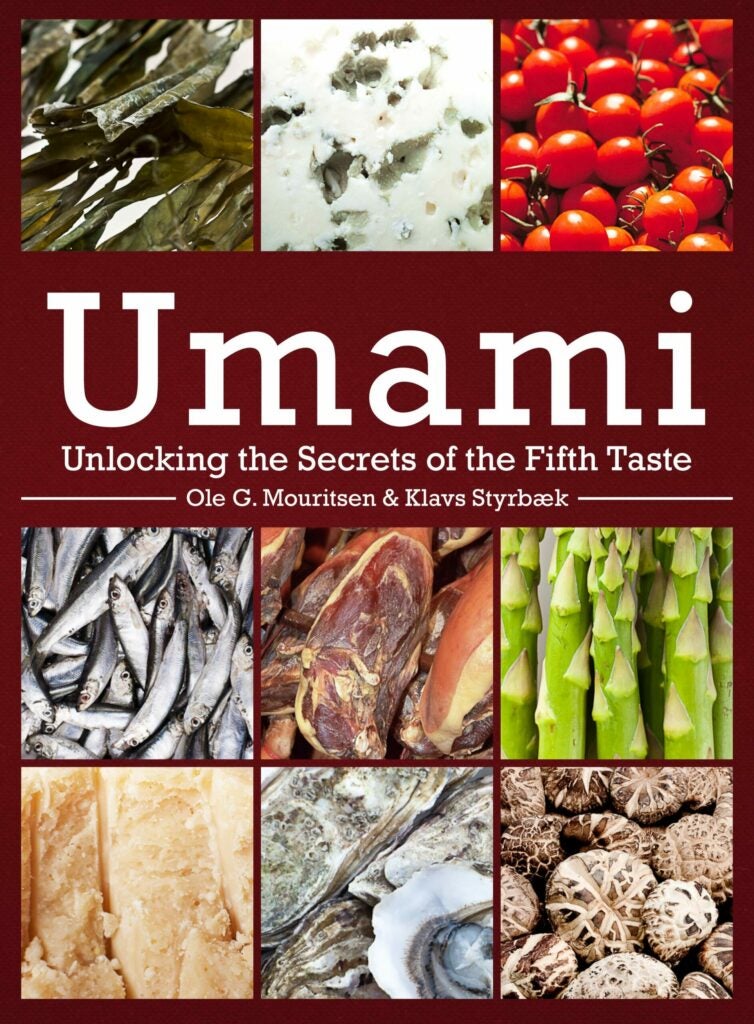 Umami: Unlocking the Secrets of the Fifth Taste

By Ole G. Mouritsen and Klavs Styrbaek. Buy the book!

But in Western cuisine, as well as Western science, although it’s central to our meals, umami has always been thought of as a somewhat exotic element. The encyclopedic Oxford Companion to Food, which contains entries for “sour milk” and “biriba” (one of the finest of the annonaceous fruits) mentions umami only in passing.

Mouritsen attributes this in part to what linguists call “codability.” Japanese has a native word for umami in part because Japanese eaters have a very common base ingredient that’s purely identified with umami: dashi. Western cuisine has no comparable single embodiment of the concept. What words do we rely on to describe the distinctive taste of MSG? We’re not quite sure.

Another factor may be the unusual neurogastronomical nature of umami, its tendency to blend with other sensations. It lingers much longer in the mouth than any other taste, and while it’s there it makes salty food taste saltier, sweet food taste sweeter, and, conversely, makes bitter and sour foods less intense. Until the discovery in 2000 of a specialized umami receptor in our taste buds, it was considered solely an enhancer or modifier of other flavors, rather than a taste in its own right.

By 2014, many more English speakers have heard of the fifth taste — Americans flock to twenty-four branches of the Umami Burger restaurant chain, and can buy Umami Spray and Umami Dust to doctor food at home — but it still has an enigmatic, alien aura.

It’s not mysterious once you get to know it. Mouritsen quotes Ikeda — “it is often difficult to recognize it unless the attention is specially directed towards it” — and spends many pages doing just that, directing attention to umami. The key, in the book, is the notion of synergistic umami, an elegant approach that makes cooking with umami an act of choreography. 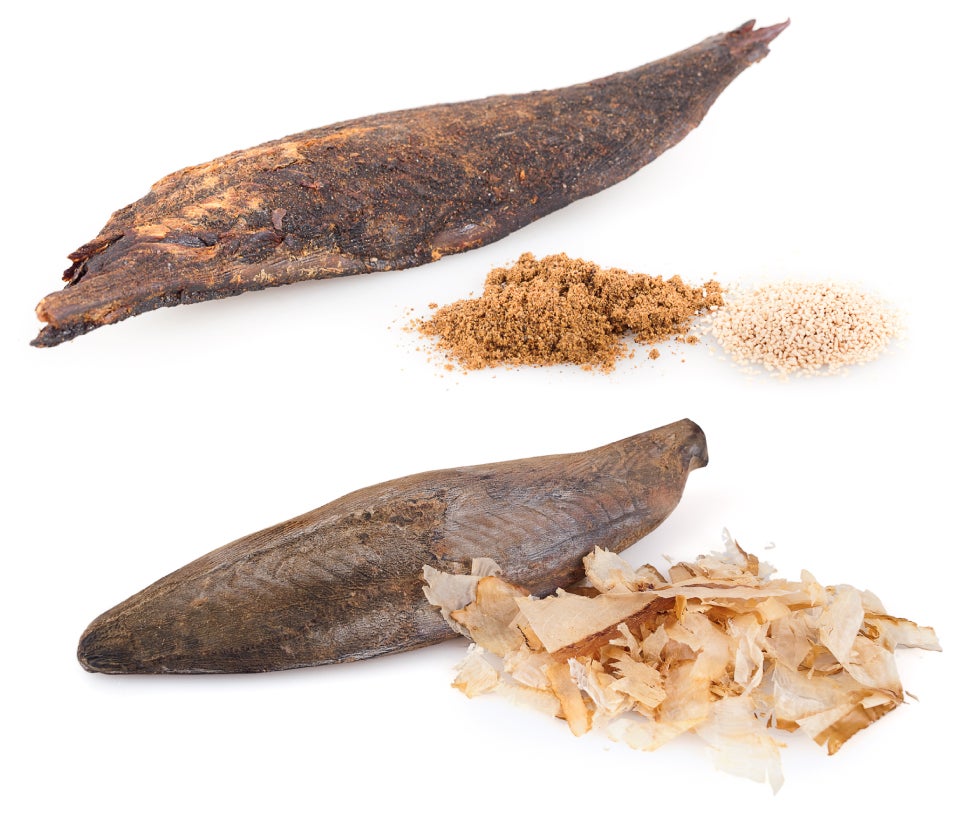 Dashi, he explains, is made with two ingredients: kombu and dried, fermented, smoked fish, called katsuobushi. As he talks, he clunks a slab of katsuobushi against the table: it looks and sounds like a piece of driftwood. In 1957, another Japanese food scientist, Akira Kuninaka, made another crucial discovery about umami. Certain amino acids, such as the glutamate in kombu, interact with certain nucleotides, such as the inosinate in katsuobushi. A tiny amount of inosinate added to a food containing glutamate intensifies the umami flavor by a factor of eight or more.

“Could I make an umami martini?” a woman wonders next to me, as we sip cups of warm roasted-vegetable broth. “Infusing dashi with gin?” She surely could.

A tiny amount of inosinate added to a food containing glutamate intensifies the umami flavor by a factor of eight or more.

Cooks, like Monsieur Dunand, have long had an intuitive understanding of synergistic umami, a fact which becomes deliciously clear in hindsight as Mouritsen displays charts he created for the book. Glutamate occurs naturally in some fresh foods — asparagus, potatoes, walnuts, chicken — and is formed over time in many more as proteins break down through aging or fermentation. All those strong-flavored, highly concentrated foods, like anchovies, prosciutto, Parmesan, sun-dried tomatoes, olives, fish sauce, Marmite, blue cheese, miso: those are the ones that are packed with available glutamate.

One chart, above, illustrates which foods abound in which umami molecules. The nucleotide partners needed for the tango are adenylate, guanylate, and inosinate. Mushrooms, particularly dried shiitake mushrooms, are hotbeds of guanylate; fish are high in inosinate, and shellfish in adenylate. Tomatoes are in an umami class of their own, containing both aminos and nucleotides, particularly in their interior pulp.

The science in Umami is interlarded with recipes by Mouritsen’s co-author Klavs Styrbaek, who owns a restaurant in Odense. One of his inventions is an umami-rich stock made from throwaway ingredients: shrimps’ heads and the water from boiling potatoes. Cooked potatoes are high in both glutamate and guanylate, “probably the most striking illustration of the meaning of umami in European peasant cuisine,” and shrimp provide inosinate and adenylate. The stock, when I make the recipe at home, has a delicate but mouth-filling flavor, more of land than of sea, and raises my ordinary mushroom barley soup to a new level of richness.

Using the concept of synergy makes it straightforward to profoundly umami-fy any dish. Not as straightforward as adding powdered MSG, which is the isolated form of the very same glutamate these recipes get from potatoes and tomatoes, but much less controversial. (Adam Fleischman, the creator of the Umami Burger empire, fiercely denies putting powdered MSG in his burgers. They only contain natural sources of umami, which is sort of like a restaurant proudly using no salt in its soup, only seawater: the result is the same.)

Umami could even be used to help people eat less.

Last year, Mouritsen received a multi-million-dollar grant to create a National Center for Taste in Denmark. Among other projects, the center will use umami as a springboard to teach science in high schools, letting students graph the synergistic interaction. He is also interested in using umami to improve public health. Research has found that if you add MSG to a dish, while simultaneously reducing the salt in it, tasters rate the low-salt version just as palatable. There’s evidence that eating umami gives a sense of satiety as well — umami taste receptors have been found in the gut — so it could be deployed to help consumers eat less.

After a final round of beers (the breakdown of yeasts gives beer a mild amount of free glutamate) the dessert course arrives, a sweet sesame crumble doused with rich kombu-infused cream. “It’s all so good!” says a guest to his date. “Either that, or it’s umami, I guess.”

Umami: Unlocking the Secrets of the Fifth Taste is available in paperback from Columbia University Press.