FYI: What Is Espresso?

Your chocolate-covered espresso beans are a lie 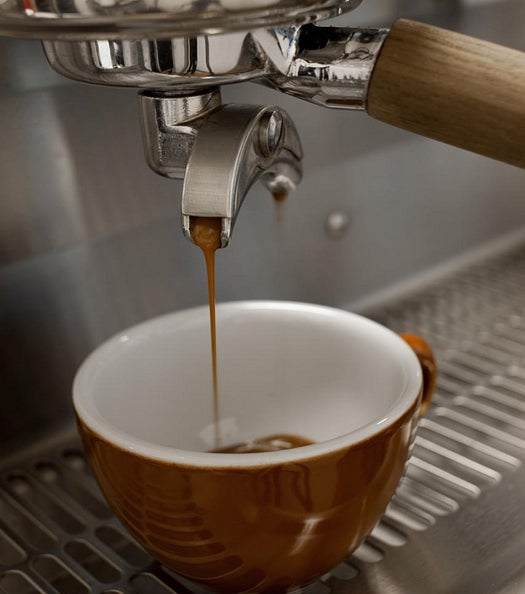 Espresso is both widely drunk and widely misunderstood, and even though we’re avid drinkers of the stuff here at PopSci, when asked precisely what the term means, we couldn’t come up with a satisfying answer. That’s because it turns out to be much easier to talk about what it is not than what it actually is. Surprisingly, there is no real definition of espresso–there are certainly elements that the experts agree on, but there are no codified guidelines, no explicit recipes. “The reality is there’s no master bible,” said Matt Lounsbury of Portland, OR’s Stumptown Coffee Roasters.

Here’s what everyone agrees on: an espresso is a concentrated, often thick coffee beverage with a layer of dense foam whose ingredients are exclusively coffee and water, created with a machine that forces hot water through a basket of tightly packed, finely-ground coffee for a limited amount of time at very high pressure. “Espresso” is also the blanket term for the process that creates this beverage.

Espresso first gained a toehold in the U.S. among immigrant Italian communities in cities, but it didn’t really take off with the rest of the country until the so-called “second wave” of coffee–basically, Starbucks. It’s since become something somewhere between an obsession and an art form with the “third wave” of coffee, led by smaller, hipper roasters like Chicago’s Intelligentsia, Portland’s Stumptown, Oakland’s Blue Bottle and New York’s Gimme!.

Here’s what espresso is not: it is not a type of bean. Kyle Glanville of Chicago-based coffee roaster/retailer Intelligentsia notes that “people are very confused about what espresso is, especially thanks to the proliferation of espresso products–chocolate-covered espresso beans, things like that. But coffee is coffee.” Espresso can be made with any type of bean; the reason that we often think of espresso as requiring a dark roast is that the specific flavor profile of the espresso that first caught on in the United States was from southern Italy, where they prefer a very dark roast. That’s been used by marketers ever since, with specific dark roasts labeled as “espresso beans.” But espresso can and is made with any level of roast and any kind of bean, and in fact the traditional very dark roast is not especially popular among the leading American coffee roasters and baristas.

Here’s another thing espresso is not: it is not the same as strong coffee. Coffee made with devices like the moka pot or the newer AeroPress produce coffee much stronger than coffee made with methods more popular in the U.S. like drip, pourover, or French press, and do have some element of pressure involved. The moka pot is sometimes even called a “stovetop espresso maker.” Not so, says Lounsbury. “The moka pot and AeroPress get closer to an espresso profile,” he says, “but it’s still not the same. The mechanical aspect is what makes [espresso] unique.”

Glanville is a little harsher. “Moka pot is not espresso. Moka pot is moka pot. Doesn’t even resemble espresso. It’s slightly more concentrated [than drip coffee] but not espresso in the way that we know it.” He also noted that a moka pot is not capable of creating crema–the trademark thick, tan foam that floats on the top of a shot of espresso and is the result of very highly pressurized water forcing through the coffee.

The broad strokes of what makes espresso are mostly agreed upon, at least by the leading American roasters, but the specifics, especially of temperature, pressure, choice of bean, and time, are up to the barista and, in the case of Stumptown, the roaster–coffee shops and restaurants have to spend time with Stumptown to learn how to create a beverage to the roaster’s standards before Stumptown will agree to become a supplier. But Matt told me that in Stumptown’s view, here’s what espresso is:

“Espresso is using nine bars of atmospheric pressure and a highly calibrated piece of equipment to force water over 24-27 grams of coffee to yield a concentrated beverage that can taste really good.”

Those are just Stumptown’s particular guidelines, though–roasters like Stumptown are necessarily vague about what is and is not espresso, because there’s no actual definition, but are emphatically precise about what makes good espresso. I asked Matt if home espresso makers–the kind that cost a few hundred bucks and can be found at your local Target–produce actual espresso. “It’s a controversial subject, I’ll put it that way,” he said.

It’s hard to nail down what is and is not espresso when there’s no definition, but everyone I spoke to agreed that pretty much every home espresso maker that costs less than $1,000 is incapable of producing enough pressure, power, and consistency of temperature to produce a shot anywhere near the level of tastiness that a proper commercial machine can make, though some were more disdainful of home machines than others. Kyle at Intelligentsia doesn’t even have an espresso maker at home, calling home espresso a task that “very few people can really undertake. It definitely requires dedication and patience and a lot of money.”

Kyle’s colleague Geoff Watts mostly echoed Stumptown’s definition, but noted that espresso is also drunk differently than drip or press coffee. “It’s an extremely intense way to experience coffee, and is unlike drip in that you’re consuming it over a short period of time in a small volume,” he said. It’s stronger than coffee by volume, but a shot of espresso has much less caffeine than a small (8 oz.) cup of coffee.

Oh, and one last thing: “expresso” is not a word and its use will cause any self-respecting barista to attempt to throttle you with their suspenders. Beware! They are stronger than they look.

Ask Us Anything
coffee
espresso
food