Physicists Create A Water Vortex That Ties Itself In Knots [Video]

Two physicists at the University of Chicago have created a knotted vortex in fluid for the first time ever. They... 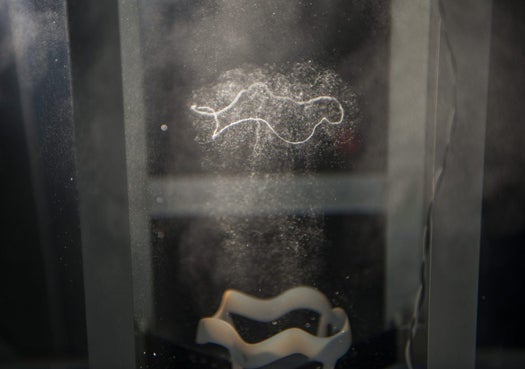 Two physicists at the University of Chicago have created a knotted vortex in fluid for the first time ever. They describe their findings in a paper in Nature Physics this week.

Vortices form in liquids, gases and plasmas, occurring naturally in everything from water to weather systems to galaxies. Theory has suggested that knotted vortices exist for almost a hundred years, but scientists haven’t been able to observe their existence until now. They may exist in the cores of neutron stars and in the plasma on the sun.

The researchers 3-D printed twisted hydrofoils, or wings designed for water, that when accelerated would create vortices in the shape of the wing. Gas bubbles made with electricity in the water moved toward the center of the vortex, allowing the researchers to observe the core clearly and record them with a high-speed camera.

The vortex loops elongated and circulated, colliding with each other and changing configuration. At some point they look like they untie themselves, although that could be due to the knots getting too small to see.

Now that they’ve created a knotted vortex they can observe, the researchers hope to further study how knotted vortices evolve and behave in the lab.

The University of Chicago has more video of the research setup at work: