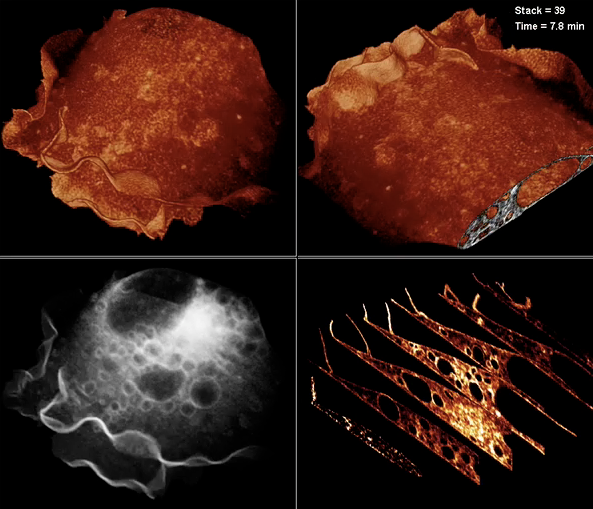 It’s been a big week for the world of the small. In a new microscope breakthrough, researchers have figured out how to use a minuscule sheet of light to produce movies of living cells, revealing mitosis in action and illuminating cells’ three-dimensional architecture with the greatest detail ever seen.

The technique uses a highly focused, super-thin beam of light similar to the type used in supermarket checkout scanners. It could allow cell biologists to watch the molecular underpinnings of cell action as they unfold.

“In looking at living systems, you want to be God. You want to have this omniscient power and be able to look at all time scales — not just single cells sitting on a microscope cover slip, but observe what’s happening in a single molecule in a single cell that is inside your heart right now. That’s the dream,” said Eric Betzig, research leader at the Janelia Farm Research Campus, part of the Howard Hughes Medical Institute. “You want to have this (omniscience) in a way that the organism is completely unaware and unaffected by that observation.”

The new technique, called Bessel beam plane illumination microscopy, could be the best way to do that without harming the cells.

In the past few months, other microscopy advances have allowed scientists to see 3-D structures of cells for the first time. MIT researchers are combining atomic force microscopy with magnetic resonance imaging to unveil 3-D images, for instance. A stochastic optical microscope under development at the University of Massachusetts uses a fluorescent tagging technique (which Betzig has also studied) to create mosaic images. And just this week, scientists in the UK announced a new technique that amplifies optical observations to see beyond the diffraction limit of light, allowing cell and virus observations.

?These are all promising techniques, but they’re equivalent to taking a snapshot. When you are trying to understand complex processes, a snapshot is only worth so much — ideally, you would capture a live-action movie. It’s more useful to watch the process of chromosomes pulling apart during cell division, like in the following video, or to see the ruffling of cell membranes, seen further below.

A movie would require observing a cell for a long time, but that causes some problems. If cells are not killed for the purposes of observing them, the process of lengthy observation does them in. One commonly used technique, confocal microscopy, uses a pinhole method to block out-of-focus light, allowing observations of very precise regions in the microscope’s focal plane. But the whole specimen is still blasted with light, Betzig said.

“You can’t study cells for too long before they literally curl up and die,” he said. “And you can’t study them very fast, because you have to scan them with a little point of light.” The images are distorted, too, he said.

Betzig was looking for ways to overcome these problems, and started studying plane illumination, or shining light at a subject from the side rather than from below, like most microscopes. A European group developed a plane illumination microscope in 2003, and used it to show the development of an embryo as cells continually divided.

“They work very well when you are looking at embryos, which are hundreds of micrometers in diameter,” Betzig said. “But they’re not so great if you want to peer inside the guts of what is happening in each cell, which is what I wanted to do.”

His research group decided to use a special focused beam called a Bessel beam, which does not diffract over long distances the way that regular light beams do. To keep the light super-focused, they had to modulate the beam, turning it on and off as it sweeps across the sample. The result is a series of high-speed images, which can be put together into a movie.

“We can study cells in their 3-D complexity at very high speeds for long periods of time. It’s the combination of high axial resolution, plus high speed, plus the non-invasiveness that makes it special,” Betzig said.

The wriggling mitochondria in this video represents 300 image stacks, each containing 300 two-dimensional images, taken in one second.

“That’s almost 100,000 images of a cell, without bleaching it or harming it,” Betzig said. “In in a second, can create an entire 3-D picture of what went on in that cell in that last second.”

The next step could be combining the Bessel beam plane technique with super-resolution techniques, Betzig said. That would be something — with no limits on how small we can see, and an imaging technique that take movies without harming organisms, the possibilities seem endless.