FYI: Will People Ever Evolve Out of Craving Unhealthy Food? 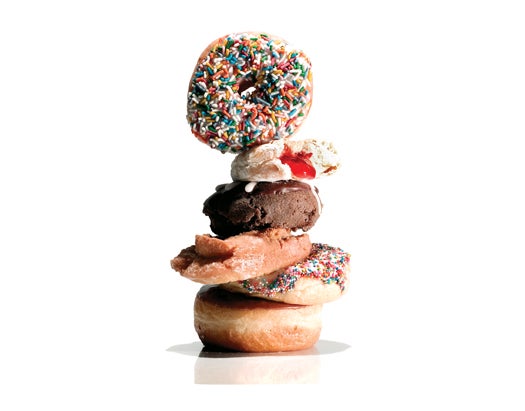 Maybe, but it’s going to take a long time. For the past 200,000 years or so, fatty and sugary foods were hard for humans to come by and well worth gorging on. Fats help maintain body temperature, sugars provide energy, and craving such food is hardwired: Eating fats and sugars activates reward centers in the brain.

Scientists are finding that the degree to which we experience those cravings can also be influenced by genes. Obesity runs in families, and although scientists still don’t know just how much of craving is hereditary and how much is learned, they have located more than 100 genes that seem to be linked to the disease. To evolve out of cravings, we’d need to stop passing down these genes.

Rob DeSalle, an evolutionary biologist at the American Museum of Natural History in New York, says that could take a while. The health conditions associated with a poor diet mostly affect middle-aged adults, who have probably already had children and passed their genes on. Perhaps, he speculates, if more children and teens get obesity-related ailments, such as heart disease and Type II diabetes, fewer will survive to reproduce, stripping craving-related genes from populations more quickly. Even then, weeding out all 100 genes is unlikely. Also, genes associated with obesity aren’t killers. They don’t code for sickle-cell anemia or cystic fibrosis. If those bad genes have hung on for a very long time, DeSalle says, marginally bad ones could hang on even longer.

Evolution is a messy process that plays out over millions of years. It typically lags far behind changes in species behavior. Until about 50 years ago, craving fats and sugars actually helped us survive. Then fast food became abundant, and the number of obese people in the U.S. tripled between 1960 and 2007. Half a century is “just not enough time to counteract millennia,” says Katie Hinde, a human evolutionary biologist at Harvard University.

Even someone genetically predisposed to crave food doesn’t have to end up fat. “Your genes are not your destiny,” DeSalle says. Take, as an extreme example, people with phenylketonuria, a recessive metabolic disorder in which a person is unable to break down phenylalanine, an amino acid, and risks mental retardation if he ingests it. By avoiding certain foods (eggs, nuts), he’ll be fine.

Ask Us Anything
Biology
Evolution
food