Electrons Are Incredibly Close to Being Perfect Spheres

The wee electron has gotten its most thorough physical examination yet, and scientists report that it is almost, almost a... 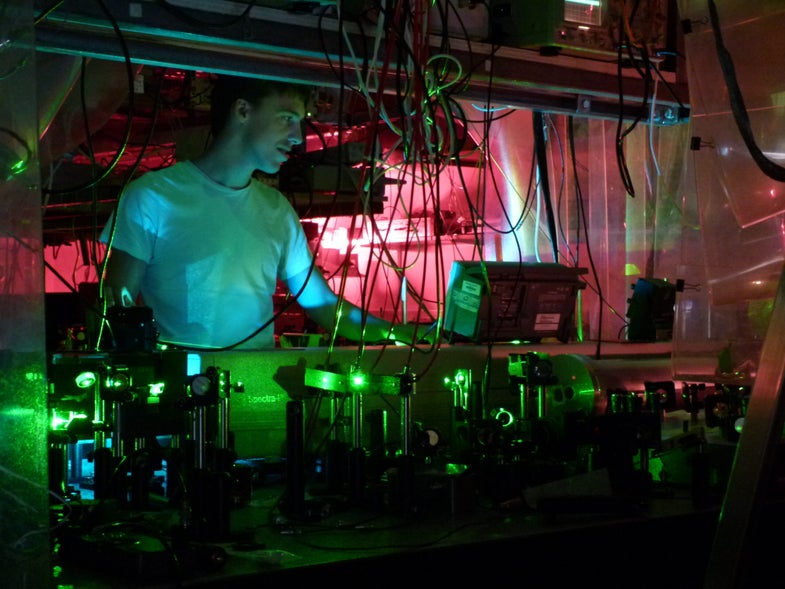 The wee electron has gotten its most thorough physical examination yet, and scientists report that it is almost, almost a perfect sphere. Researchers at Imperial College London have determined the electron is just 0.000000000000000000000000001 centimeter off from being perfectly round. Put another way, if the electron was magnified to the size of the solar system, it would deviate from immaculate rotundity by a magnitude equivalent to a human hair.

There are 26 zeroes after that decimal, in case you don’t feel like squinting to count them out. The good news is that this shows our best theories of quantum electrodynamics are not totally off. The bad news is that scientists still don’t know why everything exists.

This impressive precision is the result of experiments spanning more than a decade, using molecules of ytterbium fluoride. The research is published today in the journal Nature.Scientists at Imperial’s Centre for Cold Matter used a special laser and watched the motion of the molecules’ electrons. If the electrons were not perfectly round, their wobbling would distort the overall shape of the molecule.

“If the electron is not round, then when placed in the electric field, it will execute a gyrating motion, just like a spinning top,” researcher Jony Hudson, a physicist at Imperial College London, said in an email. “We saw no evidence of this gyrating motion.”

Scientists want to know whether the electron is round because of what it tells us about accepted theories of quantum electrodynamics, Hudson explained.

If the electron was oval-shaped instead of round, this would have suggested key differences between normal, everyday electrons and their antimatter alter egos, positrons. This could help explain why the universe has a preponderance of matter over antimatter, and therefore something rather than nothing.

As far as modern physics can tell us, the universe consisted of equal parts matter and antimatter right after the Big Bang, and the two opposites immediately started annihilating each other. Everything should have been canceled out, but stars, planets and people exist, so something happened to break the symmetry between antimatter and matter, allowing matter to permeate the cosmos.

“In order to explain the matter-antimatter imbalance, there probably needs to be some difference between the particles and anti-particles that we haven’t observed yet. A non-round electron would be clear evidence for such a difference,” Hudson said.

But it is round, so it looks like this physical difference is not the culprit. Experiments at the soon-to-be-shuttered Tevatron and the Large Hadron Collider will seek to figure this out in greater detail.

Still, it helps to get a handle on the size and appearance, as it were, of the smallest building blocks of our existence. For instance, last year, scientists led by Randolf Pohl of the Max Planck Institute for Quantum Optics in Garching, Germany, determined that the proton was four percent smaller than everyone thought. Better definitions of elementary particles help refine and bolster the best theories of quantum electrodynamics.

So why is the electron ever so slightly warped? It has to do with the interaction between electrons and clouds of other ephemeral matter.

“One of the things that quantum field theory has taught us is that what we call empty space is not really empty. Rather, the picture is that it is full of what physicists call ‘virtual particles.’ These are particles of matter and antimatter that spring in and out of existence fleetingly,” Hudson explains. “Any ‘real’ matter, like the electron, drags around a cloud of these virtual particles with it.”

Hudson and his colleagues actually measured the shape of the electron plus that little cloud. Interactions between the electron and the virtual particles result in that infinitesimally small distortion.

If the tiniest of tiny things is not perfectly round, can anything truly be a perfect sphere? Hudson said we can never know — we can just keep refining measurements to say, it is no more distorted than such-and-such. Perfect roundness is actually important for scientific experiments, such as the Gravity Probe B. The probe uses four gyroscopes made of quartz-silicon spheres that are in the Guinness Book of World Records for their flawlessness — but they are still just imperfect enough that scientists had to do a couple years of calculations to make sure their recently announced warped space-time measurements were correct.

Aside from its importance to our understanding of the fundamental properties of reality, the electron-measuring experiment could help build better atomic clocks, Hudson said.

“Our work draws heavily from that field, and vice versa many of our developments are useful to the clock makers,” he said. It could also help simulate systems that are too complicated to study with current computers.

Not content with accuracy up to one octillionth of a centimeter, Hudson, co-author Edward Hinds and others at the Centre for Cold Matter are developing new methods that will improve their measurements even more. They are working on new ways to cool molecules to extremely cold temperatures and control their exact motion, which would be a major feat. Such technology could be used to control chemical reactions, for instance.

“These techniques that we have developed are quite general, and are finding application in many fields,” Hudson said.