Watching grass grow is way more interesting than you think. In an effort to understand cellular development in plants, a... 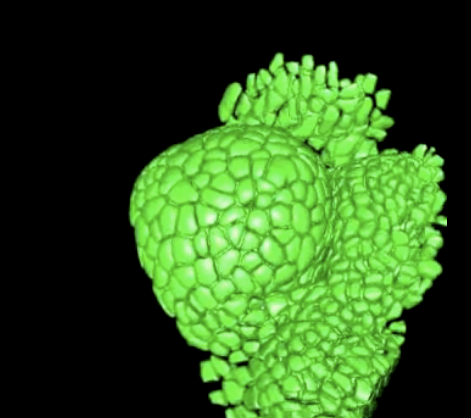 Watching grass grow is way more interesting than you think. In an effort to understand cellular development in plants, a team of French scientists made a surprisingly exciting video animation of grass growing at the cellular scale.

The team stained growth cells in Arabadopsis thaliana and rice plants, and trained laser-scanning microscopes on the growing plants, according to Scientific American. They fed the microscope data into new computer algorithms that reassembled the structures, cell by cell, in three dimensions. The result is this video.

The algorithm and the “filming” technique could inform future studies on other plants, and could also be used to study cell death, the authors say.

Plants grow very differently than animals. Their seed embryos give rise to simple stalks, unlike human fetuses, for instance, which grow limb buds soon after conception. Instead, flowers, roots and bark appear as the plant matures. Cell development at this level is not well understood, as SciAm reports — scientists don’t know exactly what causes some cells to grow petals as opposed to roots.

The team stained certain growth cells, called meristem cells, which are responsible for developing organs like flowers and roots. They found that in Arapidopsis, the flower meristem cells divided about once every 19 to 24 hours and multiplied to “several hundred cells, even before the onset of differentiation and organ formation.” The finding unlocks some secrets about cell division rules in plants, the researchers say.