After years of lagging behind in the acceptance of scientific fact, the Vatican has not only caught up, but, with... 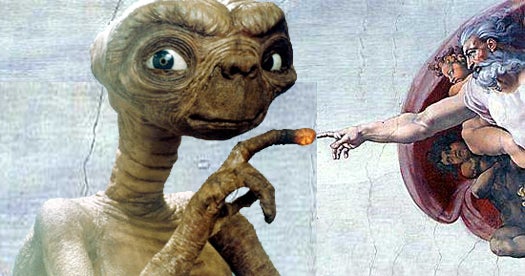 After years of lagging behind in the acceptance of scientific fact, the Vatican has not only caught up, but, with a conference this week, moved far past the boundaries of modern science. Yes, 376 years after they condemned Galileo for discussing a heliocentric solar system, and a mere 16 years after pardoning him for it, the Vatican will host a conference on astrobiology and the existence of extraterrestrial life.

The conference is sponsored by the Pontifical Academy of Sciences, and will host 30 scientist from fields such as astronomy, biology, physics, chemistry and geology.

The Vatican’s interest in extraterrestrial life began last year, when Father Jose Gabriel Funes, the chief papal astronomer and a Jesuit priest, announced that the existence of alien life does not contradict the Bible. This revelation opened up a wide range of theological implications, including the possibility of aliens who don’t need salvation, since their ancestors didn’t commit original sin in the Garden of Eden.