Complex Life Evolved One and a Half Billion Years Earlier Than Previously Thought, New Fossils Show

Scientists unveiled fossils from West Africa Thursday that turn paleontology on its head — they push the origin of multicellular... 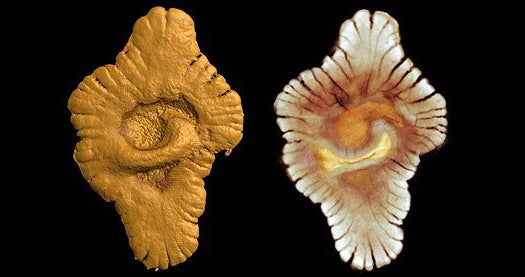 Scientists unveiled fossils from West Africa Thursday that turn paleontology on its head — they push the origin of multicellular life back by 1.5 billion years.

The fossils are 2.1 billion years old, the scientists say, fully three times older than previous estimates of when complex life evolved. The fossils were reported in the British journal Nature.

Paleontologist Abderrazak El Albani, the report’s lead author, said the fossils, which range in size from about half an inch to 4 inches, are from an era when life was thought to exist on a purely microbial level.

Not until the Cambrian explosion, about 600 million years ago, did complex life evolve — or so scientists thought.

The team found more than 250 specimens, which are shaped somewhat like cookies with a lumpy interior. The organism looks nothing like any forms of life we know today, but they have a couple familiar traits: their cells appear to have a membrane-bound nucleus housing and protecting its chromosomes, the genetic blueprints for life.

El Albani’s team found them in shale formations in the West African country of Gabon, and at first, were not sure they had found anything interesting, the LA Times reports. But X-ray tomography unveiled complicated structures and folding.

Philip Donoghue, a paleontologist at the University of Bristol who co-wrote a commentary on the finding, said the fossils were totally unexpected: “(It was) like ordering an hors d’oeuvre and some gigantic thick-crust pizza turning up,” the LA Times quotes him saying.

The organisms lived in slightly oxygenated ocean waters, suggesting that oxygen may have been a catalyst for the leap from single- to multi-cellular life, AFP reports.

El Albani said the next step would be to study the fossils to learn more about how they lived and what their surroundings were like.