If Evolution Had Taken a Different Turn, Could Dragons Have Existed?

It would have taken quite a few turns for natural selection to have produced dragons, but if you’re willing to... 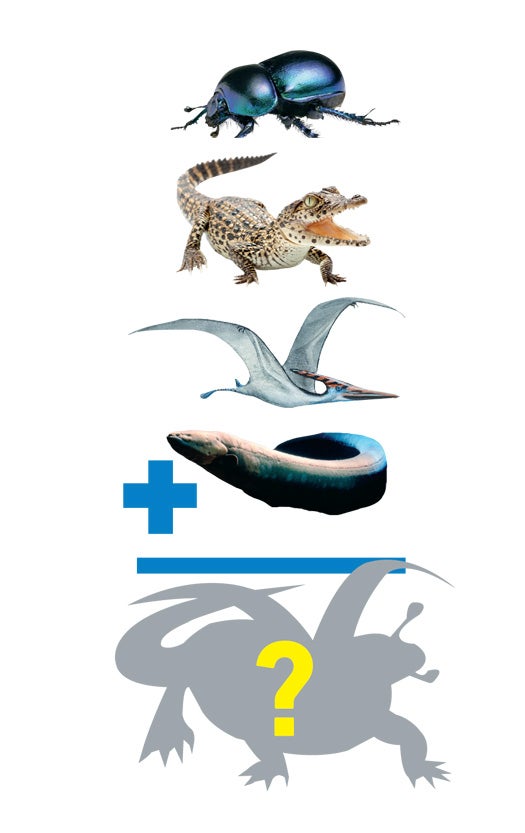 Dragons don't exist (as far as we know), but some of their individual characteristics can be found throughout the animal kingdom. iStock (2); Dorling Kindersley/Getty Images; Richard T. Nowitz/Photo Researchers
SHARE

It would have taken quite a few turns for natural selection to have produced dragons, but if you’re willing to stretch a bit, most classic dragon characteristics do exist in other species. They just don’t come packaged in one animal.

First up on the dragon checklist: flying. Dragon wings are usually depicted in one of two ways—a third pair of limbs connected to the backbone, or webbed forearms. Jack Conrad, a paleontologist and reptile expert at the American Museum of Natural History in New York, thinks the latter is more plausible.

“It seems that six appendages are very unlikely in vertebrates,” he says. “The only thing close to having six limbs are these frogs in the western part of the U.S. that get this bad parasite and end up generating extra limbs. Even then, the new limbs are identical to the hind limbs, and the frogs don’t do well. It seems that anytime nature tries to generate a vertebrate hexapod, it dies. That seems to be the main limitation.”

In Conrad’s opinion, the leathery wings of a pterosaur are the best possible flight mechanism for a giant lizard. “Quetzalcoatlus had a 30-foot wingspan,” he says. “That would do the trick.” Big, strong wings are necessary to compensate for the weight of a dragon’s skin, which, of course, would need to withstand bow-and-arrow attacks. “Let’s throw a little alligator in there for armor,” Conrad says. An alligator’s skin, he explains, is made partly of bony plates. When European settlers first encountered the reptiles, the skin proved to be tough enough to turn away a musket ball, plenty strong for a dragon.

OK, so we’ve got a very large alligator with the wings of a pterosaur that can repel musket fire. Now it just needs to breathe flames. This is where no parallel exists—there are no known animals that can spit fire or even a flammable liquid. But there are some beetles that can shoot caustic chemicals from their abdomen that can burn people’s skin, so it’s not totally out of the question that some animal at some point in time could make a flammable liquid. Cobras can spit venom with great accuracy at objects six feet away; the dragon could borrow that ability to propel the flammable liquid. As for lighting it? “Well, maybe, if you had some specialized organ like an electric eel’s tail dangling in the mouth, that could spark that liquid and allow the creature to breathe fire,” Conrad says. “Of course, this is all very theoretical.”