Megapixels: A Monkey Controls a Robot Hand With its Mind

The first direct brain-machine interface, developed in the 1990s, connected a computer to a rat. By 2003, scientists had mostly... 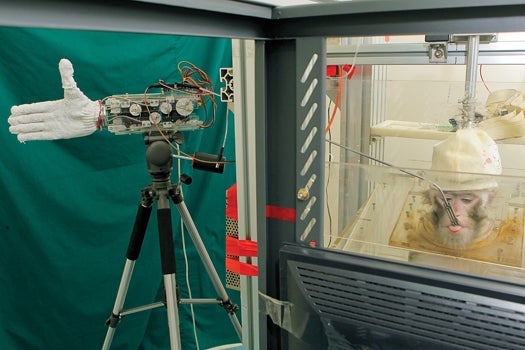 The first direct brain-machine interface, developed in the 1990s, connected a computer to a rat. By 2003, scientists had mostly replaced rats with nonhuman primates. One of which is Jianhui, an eight-year-old rhesus macaque at Zhejiang University in eastern China.

Electrodes implanted in his motor cortex intercept electrical pulses fired from approximately 70 neurons. A computer interprets those signals and sends commands to motors in each finger of the robotic hand. When Jianhui completes a task, such as grasping onto an extended handle, he receives a sip of water from a tube. The imposing device in which he sits keeps his head immobilized during the experiment. Training sessions last for two hours, five days a week. Jianhui has recently mastered grasping, so researchers will now begin teaching him to use all of the fingers on the robot hand in a single, coordinated motion.