By Twisting Light Signals into a Vortex, Researchers Create Fastest Wireless Connection Ever

By twisting radio waves into a threaded vortex, an international team of researchers has beamed data through the air at... 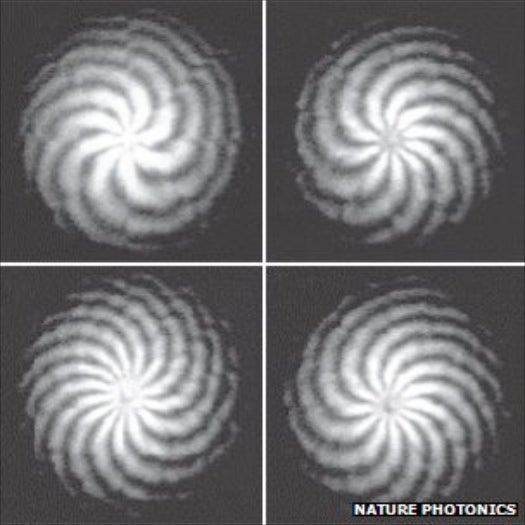 By twisting radio waves into a threaded vortex, an international team of researchers has beamed data through the air at 2.5 terabits per second, creating what has to be the fastest wireless network ever created. Moreover, the technique used to create this effect has no real theoretical ceiling, ExtremeTech reports. That means–in theory–that an infinite number of these vortex beams could be threaded together to add infinite capacity to conventional transmission protocols.

These new, high-capacity vortex beams tap a characteristic known as orbital angular momentum (OAM). Right now, conventional transmission protocols like Wi-Fi or LTE modulate the spin angular momentum (SAM) but not the OAM. You can think of SAM as the spin of a signal, like a bullet (or a tightly spiraling football) twisting as it carves a direct path through the air. So to borrow ExtremeTech’s analogy, if SAM is the earth rotating on its axis, then OAM is its movement around the sun–not just rotation, but actual movement in space.

The researchers did that across just one meter, making the achievement somewhat lackluster from a practicality perspective. And given that optical data networks still have plenty of space to grow, it’s not a huge deal for fiber optics. But for wireless networks, the idea that we might be able to grow capacity indefinitely is pretty mind-blowing. The next step is, naturally, making this work across longer distances. Much more detail on OAM and the future of wireless transmission over at ExtremeTech.