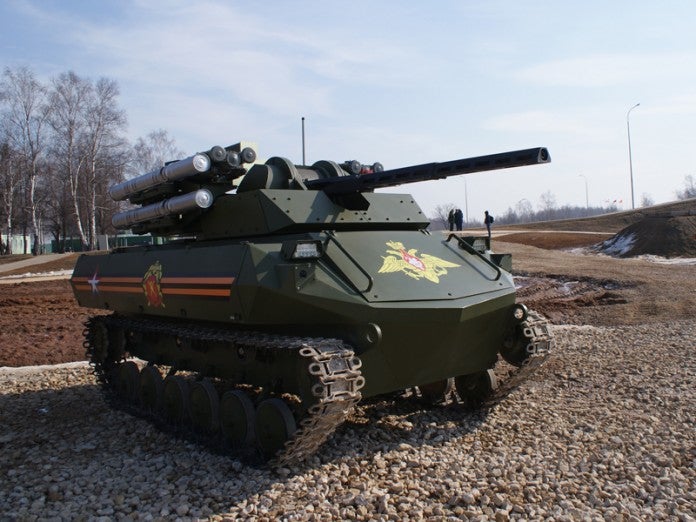 When robots go to war, they won’t look like us. They’ll take to the sky with rotors, or they’ll cruise through the sea like bulky torpedoes. Or, in Russia, they’ll roll onto the battlefield as miniature tanks, without a single human inside.

The Uran-9 is an unmanned ground combat vehicle, or a robot tank. It’s the latest in a long line of war robots made by Russia, and like all of them, it hasn’t seen combat yet. It features a machine gun, a 30mm cannon, and missiles. It’s built as both a scout and a fire support platform, one that would likely accompany troops into battle, like in the demonstration below:

It can also drive over burning walls, which is just normal tank business.

Rather than being a true robot, the Uran-9 is remotely controlled, so there’s always a human directing the machine. That’s good news for people skeptical of killer robots, though still not great news, given the bad judgements humans themselves can make with weapons. And what weapons it will have! It carries both anti-tank missiles, accurate at over 2 miles, and anti-air missiles, making it a dense little bundle of firepower.

And we can expect it on battlefields soon. Initially planned to enter military service in 2017 or 2018, Defence Blog reports that it will enter service by the end of this year. Russia also hopes to export it.