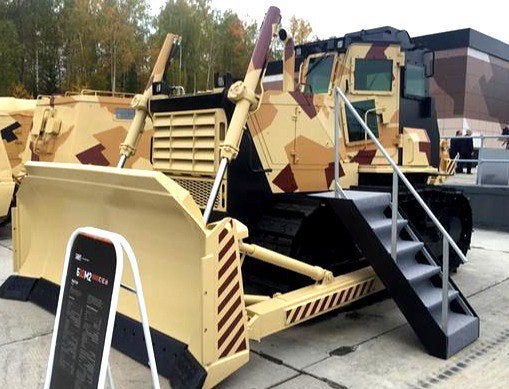 Running right now in the city of Nizhny Tagil, the Russia Arms Expo 2015 is a chance for the former superpower to show off its latest military hardware. Amidst the broken tanks and hypothetical fighter-hunting drones sits a somewhat more mundane craft: an armored bulldozer, Russia’s first since the Soviet Union’s World War II-era BAT-M.

Armored bulldozers may call to mind America’s 2004 “Killdozer” rampage, where a 56 year old man in a heavily armored bulldozer destroyed several buildings before taking his own life.

Military armored dozers are instead a tool of directed violence. Following the 2003 invasion of Iraq, the American military used bulldozers to demolish buildings suspected of hiding insurgents. The Israel Defense Forces use custom-modified Caterpillar bulldozers, known as D9s, to level buildings in support of infantry. These extra-armored dozers feature armor to keep the crew inside safe from rifle and machine-gun fire.

The armored bulldozer is a tool of urban warfare, moving with troops and crushing buildings with snipers inside, in situations where artillery or airstrikes are too risky for troops. It’s hardly a clean weapon of war–destroying buildings can easily cause civilian casualties, and leave plenty of people homeless after a conflict.

That’s a pretty grim fate, but converting a vehicle whose best civilian use is demolition into a tool of war is unlikely to create something not deadly. As the war in Eastern Ukraine between Ukrainian forces and Russian-backed separatists continues to drag on, there’s a chance these modified dozers will crash their way into combat.