2016 is going to be the hottest year on record

Stop me if you've heard this one before... 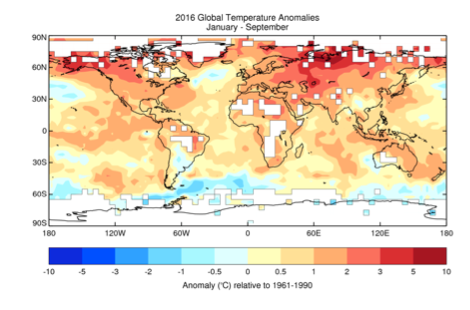 There are really only so many ways you can say the same thing again and again, but that hasn’t stopped the World Meteorological Organization from saying it again: It’s getting hot in here.

Today, the WMO released a report on the status of the global climate this year. Just like last year, 2016 is shaping up to be the hottest year on record.

To be fair, there are mitigating circumstances this year. The early months of the year were much warmer than usual because of a strong El Niño event in the Pacific that disrupted regular weather patterns. These events can worsen droughts and flooding (mostly in South America, but also elsewhere across the world), but even a powerful El Niño isn’t enough to explain the alarming warming trend over the first part of this year.

The issues extend beyond just a warming temperature. Greenhouse gas concentrations are up, Arctic ice coverage is well below normal, and while Antarctic ice coverage has been faring better, it’s still dwindling. High-impact events like floods, wildfires, and hurricanes are exacerbating the situation as they grow stronger and more frequent.

The planet’s average temperature continues to creep closer to 2 degrees Celsius over pre-industrial levels, the cut-off goal identified in last year’s Paris Climate Agreement. Over 100 countries have ratified the agreement, together representing 84 percent of global emissions. And even though the United States may be pulling out, many other countries have said they remain committed to the agreement. With any luck, then, we may be able to stop saying the same thing over and over again.