This robot cleaner can follow a 'smart map' of your place. 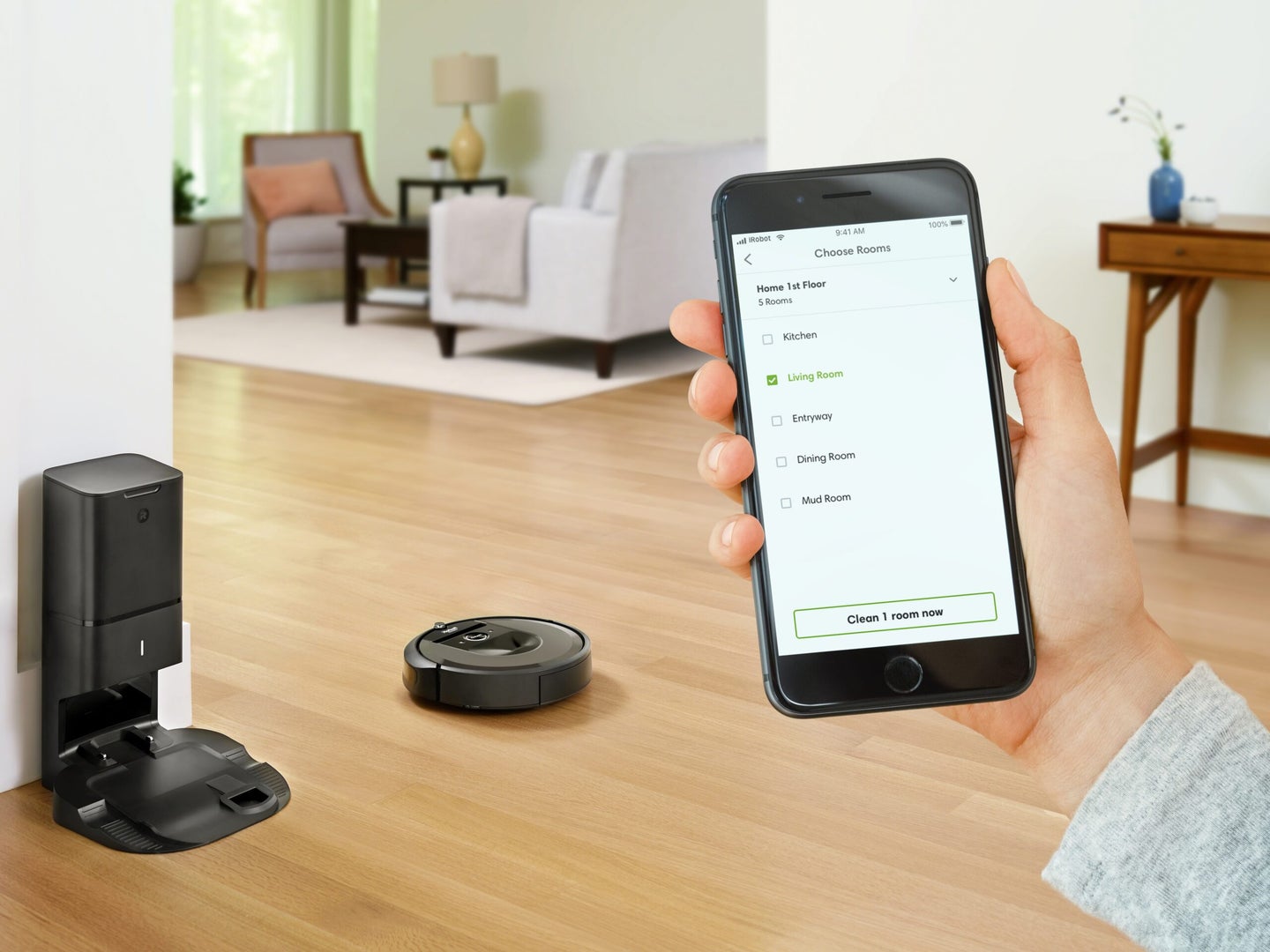 You can tell the new Roomba which room to clean. iRobot
SHARE

The holidays are over, and your home may be showing some wear—perhaps there are green needles on the floor from a tree, or tracked-in dirt near the front door. Luckily, robot vacuums keep getting smarter, and can now clean specific rooms in your house at your command. That’s the case with the newest, and priciest Roomba, which I’ve been trying out since early November. Here’s what it’s like to use, and whether or not you should consider buying one this year.

Like other Roomba vacuums, the new flagship, called the i7, connects to Wi-Fi and an app, meaning that you can tap the “clean” button on your smartphone to make the robot do its job. But what sets this latest model apart is its ability to learn and remember the layout of your home (actually, multiple spaces). To do that, it relies on an imaging sensor on top of the robot that looks for patterns of light and dark around your abode so it can know where it is.

But to use that smart maps feature, the device first must learn the layout of your place. There are two ways to get the robot to know its way around your home: the first is to use the app to send it on a “training run,” where it wheels around your house and learns as it goes but doesn’t clean; the second is to send it on a cleaning run during which time it also maps.

Either way, it will likely need multiple runs for it to learn your home: in my one-bedroom New York City apartment, it took more than one trip to do that, and my place is around 400 square feet. After the first training run, it had learned 50 percent of the apartment. After the second, 90 percent.

When the map is finally ready, you need to finish setting it up. First, you give the map a name, like “our apartment,” or “downstairs,” or whatever you want— “Narnia” would be acceptable. Then, you need create “room dividers” on the digital map. These are green lines that you can adjust to separate rooms for the Roomba to know what space is what. For example, I divided a long hallway into two portions, then labeled one simply “hallway,” and another “entryway.” Other rooms are labeled in straightforward ways: living room, kitchen, master bedroom.

After that, you can tell your Roomba to clean wherever you want it to. That process can be slightly confusing at first. You don’t do it via the “Smart Maps” section of the app; tapping on the image of a room on the map you just created does nothing. Instead, start by touching the main “clean” button on the app, and it will prompt a choice: do you want to clean your entire place, or just choose certain rooms?

Once you have taught the Roomba your home, labeled the rooms, and surmounted that tiny bit of confusion on the app’s interface, the device’s intelligence pay off: you can tell it go vacuum just specific rooms, and it will wheel to them and do it while ignoring the others (although it may need to go through one room to get to another).

One snafu: recently, when I asked it to clean the bedroom, the Roomba appeared to be confused, and instead of journeying straight to that room, began exploring the space in front of its Clean Base and the nearby kitchen as if it was a poor, lost robot. iRobot speculates that the machine wasn’t yet localized on that specific mission, but would have eventually figured out where it was had I let it run longer.

It’s not the only robot vacuum on the market like this: the Botvac D7 by Neato is similar, and can also remember a home’s layout and then clean specific rooms, or zones, on request.

You can also buy the Roomba i7 with a new component called the Clean Base, which will be a not-subtle addition to your home: it’s 19 inches high, about a foot wide, and 15 inches deep. This is the spot where the robot docks and charges when you’re not using it.

But what separates this docking station from other typical Roomba chargers is that it can also empty your vacuum’s dust bin for you after it finishes cleaning. That process involves a very loud sucking noise as the dirt travels from your Roomba into a bag at the top of the clean base, which you’ll eventually have to throw away and replace when it fills up.

If you don’t opt for the Clean Base, the Roomba will come with a regular, smaller charging station and you’ll have to suffer through the process of emptying its dust bin manually.

After the Roomba has done its thing, you can use the app to see just what it did. Sure, you could walk around your home and look, but some people get a sense of satisfaction from seeing a digital summary (and since you can use the app to make the robot clean remotely, you can then also see the results from wherever you are, too). In my case, I genuinely like being able to see that that report, which includes a map of the places the robot cleaned, plus three other metrics: the square footage it cleaned, the time it cleaned for, and another one, confusingly labeled simply “Dirt,” followed by a number like “3” or “0.”

That metric refers to how many “dirt detect” events the Roomba experienced—according to iRobot, that happens when the robot’s sensors pick up on an especially dirty patch of your home, such as “a concentration of beach sand on the floor” or “a clump of pet hair.” When that happens, the robotic critter spends more time cleaning up that spot. Generally, it did an acceptable job of tidying my already pretty clean place.

Should you get it?

The Roomba i7+ with the Clean Base is very expensive: at $950, it’s the price of a high-end smartphone, and costs more than a Dyson V10 cordless cleaner, which is the latest stick vacuum from Sir James Dyson. Besides the price, the downsides are an occasionally slightly confusing app experience and the loud noise the clean base makes as it empties out the Roomba’s bin.

But the upsides are clear: it’s a robot vacuum for people with some disposable income who love the granular control of being able to tell the device to clean specific rooms, see a detailed report of just what it did, and have it empty itself at the end of a run. If that describes you, then it’s worth it (even if there are definitely less expensive options available).

Without the Clean Base, the i7 costs $700, but still has the smart-map-clean-by-room feature. And if you want a Roomba that doesn’t have the clean-by-room ability but can give you a cleaning report afterward with a map of what it did, the 960 model costs $620 and can do that. Finally, the cheapest Roomba in the iRobot lineup is $300, which is around the same price as a Dyson V7 handheld vacuum—an older Dyson model.

Or, if you have hardwood floors, you could just sweep them, although your broom won’t send you a “dirt detect” report.