What are sound waves and how do they work?

Understanding what we hear helps us understand what is there. 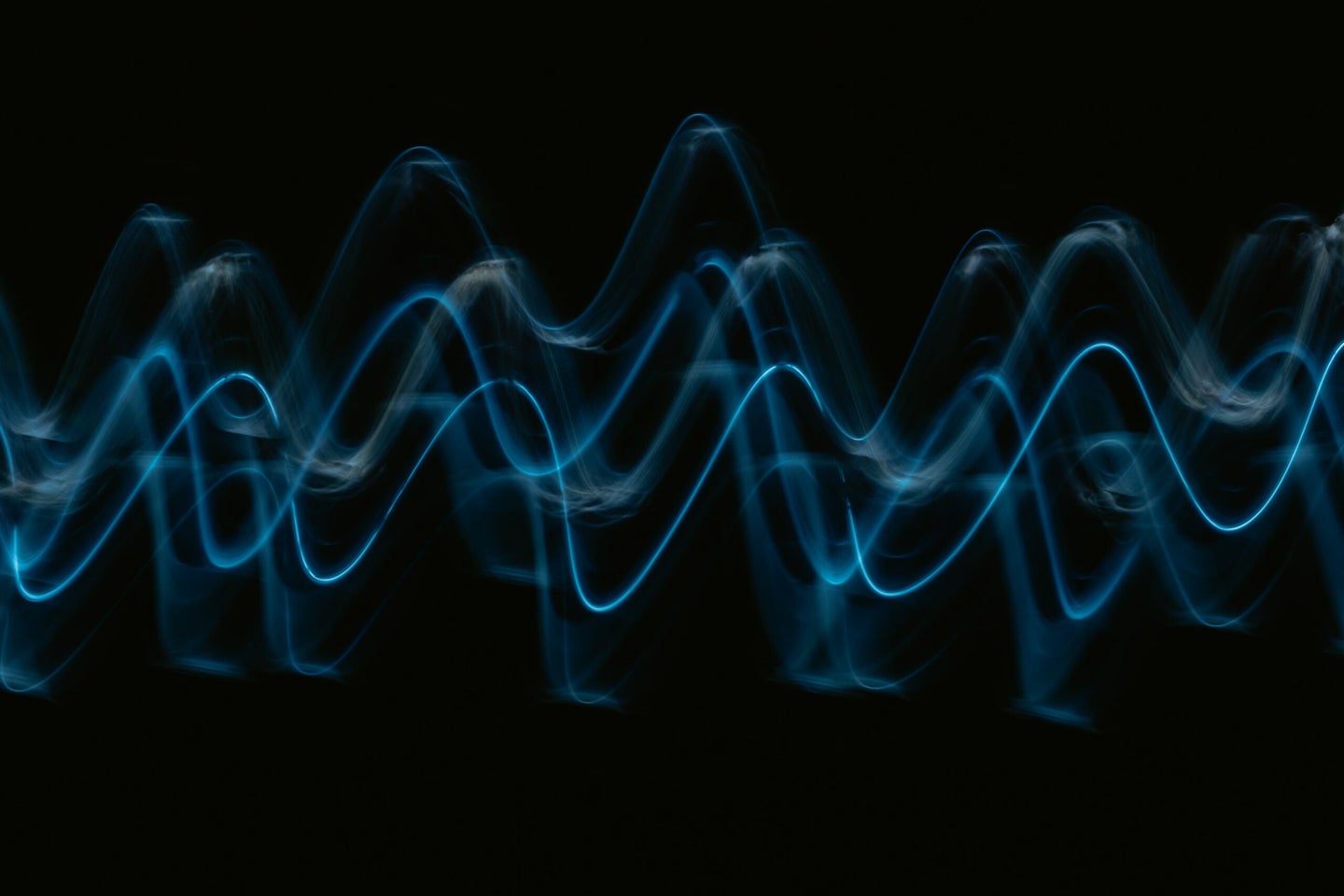 Whether you’re recording or just vibin’, the science of sound can be cool. Pawel Czerwinski, Unsplash
SHARE

We live our entire lives surrounded by them. They slam into us constantly at more than 700 miles per hour, sometimes hurting, sometimes soothing. They have the power to communicate ideas, evoke fond memories, start fights, entertain an audience, scare the heck out of us, or help us fall in love. They can trigger a range of emotions and they even cause physical damage. This reads like something out of science fiction, but what we’re talking about is very much real and already part of our day-to-day lives. They’re sound waves. So, what are sound waves and how do they work?

If you’re not in the industry of audio you probably don’t think too much about the mechanics of sound. Sure, most people care about how sounds make them feel, but they aren’t as concerned with how the sound actually affects them. Understanding how sound works does have a number of practical applications, however, and you don’t have to be a physicist or engineer to explore this fascinating subject. Here’s a primer on the science of sound to help get you started.

The shape of things to come

What are sound waves? Sound waves are a type of energy that’s released when an object vibrates. Those acoustic waves travel from their source through a medium, like air or water, and when they come into contact with our eardrums, our brains translate the pressure waves into words or music, or signals we can understand. These pulses help you place where things are in your environment. We can experience sound waves in ways that are more physical, not just physiological, too. If sound waves reach a microphone, like the industry-standard Shure SM7B mic, it transforms them into electronic impulses that are turned back into sound by vibrating speakers. And, at a concert, we can feel the deep bass in our chest. Opera singers can use them to shatter glass. It’s even possible to see sound waves when they’re sent through a medium like sand, which leaves behind a kind of sonic footprint.

That shape is rolling peaks and valleys, the signature of a sine (aka sinusoid) wave. If the wave travels faster, those peaks and valleys form closer together. If it moves slower, they spread out. It’s not a poor analogy to think of them somewhat like waves in the ocean. It’s this movement that allows sound waves to do so many other things.

Freq on a leash

When we talk about a sound wave’s speed, we’re referring to how fast these longitudinal waves move from peak to trough and back to peak. Up…and then down…and then up…and then down. The technical term is frequency, but many of us know it as pitch. We measure sound frequency in hertz (Hz), which represents cycles-per-second, with faster frequencies creating higher-pitched sounds. For instance, the A note right above Middle C on a piano is measured at 440 Hz—it travels up and down at 440 cycles per second. Middle C itself is 261.63 Hz—a lower pitch, vibrating at a slower frequency.

Understanding frequencies can be useful in many ways. You can precisely tune an instrument by analyzing the frequencies of its strings. Recording engineers use their understanding of frequency ranges to dial in equalization settings that help sculpt the sound of the music they’re mixing. Car designers work with frequencies—and materials that can block them—to help make engines quieter. And active noise-cancelling (ANC) headphones and earphones use artificial intelligence and algorithms to measure external frequencies and generate inverse waves to cancel them out, allowing them to isolate the wearer from the noise around them. The average frequency range of human hearing is 20 – 20,000 Hz.

What’s in a name?

The hertz measurement is named for the German physicist Heinrich Rudolf Hertz, who proved the existence of electromagnetic waves.

Amplitude equates to sound’s volume or intensity. Using our ocean analogy—because, hey, it works—amplitude describes the height of the waves.

We measure amplitude in decibels (dB). The dB scale is logarithmic, which means there’s a fixed ratio between measurement units. And what does that mean? Let’s say you have a dial on your guitar amp with evenly spaced steps on it numbered one through five. If the knob is following a logarithmic scale, the volume won’t increase evenly as you turn the dial from marker to marker. If the ratio is 4, let’s say, then turning the dial from the first to the second marker increases the sound by 4 dB. But going from the second to the third marker increases it by 16 dB. Turn the dial again and your amp becomes 64 dB louder. Turn it once more and you’ll blast out a blistering 256 dB—more than loud enough to rupture your eardrums. But if you’re somehow still standing, you can turn that knob one more time to increase your volume to a brain-walloping 1,024 decibels. That’s almost 10 times louder than any rock concert you’ll ever encounter, and it will definitely get you kicked out of your rehearsal space. All of which is why real amps aren’t designed that way.

We interpret a 10 dB increase in amplitude as a doubling of volume.

Timbre and envelope are two characteristics of sound waves that help determine why, say, two instruments can play the same chords but sound nothing alike.

Timbre is determined by the unique harmonics formed by the combination of notes in a chord. The A in an A chord is only its fundamental note—you also have overtones and undertones. The way these sound together helps keep a piano from sounding like a guitar, or an angry grizzly bear from sounding like a rumbling tractor engine.

But we also rely on envelopes, which determine how a sound’s amplitude changes over time. A cello’s note might swell slowly to its maximum volume, then hold for a bit before gently fading out again. On the other hand, a slamming door delivers a quick, sharp, loud sound that cuts off almost instantly. Envelopes comprise four parts: Attack, Decay, Sustain, and Release. In fact, they’re more formally known as ADSR Envelopes.

This is how quickly the sound achieves its maximum volume. A barking dog has a very short attack; a rising orchestra has a slower one.

Sustain isn’t a measure of time, it’s a measure of amplitude, or volume. It’s how loud the plucked guitar note is after the initial attack, but before it fades out.

This is the time it takes for the note to drift off to silence.

Science fiction movies like it when spaceships explode with giant, theater-rumbling booms. However, sound needs to travel through a medium so, despite Hollywood saying otherwise, you’d never hear an explosion in the vacuum of space.

Sound’s velocity, or the speed it travels at, differs depending on the density (and even temperature) of the medium it’s moving through—it’s faster in the air than water, for instance. Generally, sound moves at 1,127 feet per second, or 767.54 miles per hour. When jets break the sound barrier, they’re traveling faster than that. And knowing these numbers lets you estimate the distance of a lightning strike by counting the time between the flash and thunder’s boom—if you count to 10, it’s approximately 11,270 feet away, or about a quarter-mile. (Very roughly, of course.)

Anyone can benefit from understanding the fundamentals of sound and what are sound waves. Musicians and content creators with home recording set-ups obviously need a working knowledge of frequencies and amplitude. If you host a podcast, you’ll want as many tools as possible to ensure your voice sounds clear and rich, and this can include understanding the frequencies of your voice, what microphones are best suited to them, and how to set up your room to reflect or dampen the sounds you do or do not want. Having some foundational information is also useful when doing home-improvement projects—when treating a recording workstation for instance, or just soundproofing a new enclosed deck. And who knows, maybe one day you’ll want to shatter glass. Having a better understanding of the physics of sound opens up wonderful new ways to explore and experience the world around us. Now, go out there and make some noise!