Musicians on a budget and on the go should check out the Sennheiser IE 100 Pro in-ear monitors. 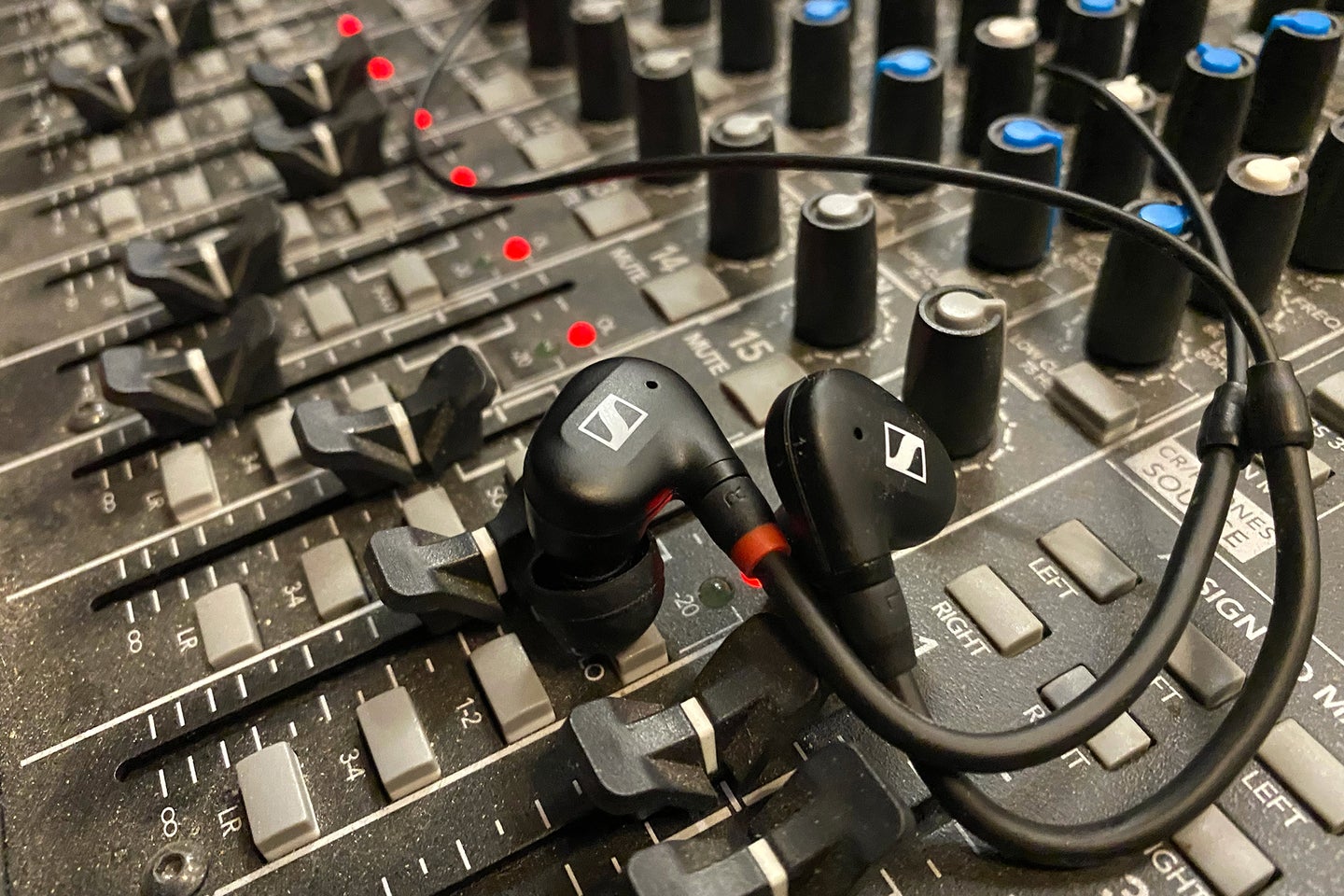 Keep the beat, and some cash, with the Sennheiser IE 100 Pro, a great bang-for-the-buck in-ear monitor. Roberto Baldwin
SHARE

You’ve seen it before. A singer on stage sticks a finger in their ear ahead of some insane vocal gymnastics that tumble through pitches normally reserved for sirens and fancy birds. The reason that digit is now plugging up an earhole is that live shows are loud, chaotic soundscapes and if a singer is to stay on key, they need to be able to hear the sounds coming out of their mouth. That’s where in-ear monitors come into play. They’re the big brother of earbuds that replace those fingers to fill the ear canal with a sound mix specifically tailored for individual musicians during a performance. And they can reach into the multiple thousands for the kind of custom-designed indulgences you’ll see on top touring artists. The $99.95 Sennheiser IE 100 Pro in-ear monitors offer this service at a price that’ll appeal to local garage bands. And they’re compatible with an optional $50 Bluetooth module that makes them more convenient to use on the way to and from practice (or after the band breaks up). As long as you don’t expect them to help you deliver a Mariah Carey-level octaves run, you’ll be pleasantly surprised by these entry-level but still professional in-ear monitors.

What is the Sennheiser IE 100 Pro?

The Sennheiser IE 100 Pro is the most affordable model in a line of universal in-ear monitors, or IEMs, from the long-respected microphone, speaker, and headphone company. The German manufacturer’s pro audio products are found in studios and on stages worldwide, and Sennheiser professional headphones are used by audiophiles to enjoy the recordings those mics capture. IEMs, meanwhile, are more often the territory of performers and audio purists because of both price and experience. Because IEMs were originally developed for musicians needing to block out all the sound onstage and from the audience, the earphones can insert deeper in your ear than, say, a pair of Apple AirPods Pro. And that feeling of isolation isn’t to everyone’s liking (for some people it can even affect equilibrium).

These Sennheiser in-ear monitors, however, are a lighter, unobtrusive design comfortable for hours-long listening and jam sessions. To command top-tier prices and attention, manufacturers may shove all kinds of technology into these tiny accessories. It’s not uncommon to find IEMs with five, six, seven, or more tiny speakers per ear and the more you shove, the larger the price tags and that leads many musicians to keep them hidden away in secured road cases when not at a gig. The Sennheiser IE 100 Pro features just one transducer per ear, a 10mm dynamic driver—a traditional woofer shrunk to magic bean size. The result is distortion-free sound that can work with a smartphone in a coffee shop almost as well as it does in a rehearsal or public performance space. Plus you won’t feel as bad if something happens to them.

For this review, we tested the $149.95 2-in-1 combo package in matte black plastic (red and clear are also available). Out of the box, the Sennheiser IE Pro 100 wireless in-ear monitors come attached to the Bluetooth module. The skinny black module is on one side of a short cable that drapes around the back of your neck, while mobile-device controls (plus a microphone for calls) are on the other side. A standard 1.3m wire to hook the earphones to devices with a 3.5mm headphone jack is stored in a tiny black satchel along with additional silicone eartips for establishing a secure seal (a must for isolation and good bass response).

In-ear monitors need to accomplish four things well in order to be even considered for live performance: produce quality sound, reduce external noise, be comfortable, and stay in the ear regardless of on-stage antics. Out of the box, the Sennheiser IE 100 Pro slid easily into my ears and stayed put thanks to the eartips and the attached malleable plastic hooks routed over the top of my ears. So, fit was not an issue. Passive noise resistance—old-fashioned plugging up the ear, no ANC circuitry involved—was solid. As for sound, we’ll get to that soon.

The IE 100 Pro’s wireless cable features Bluetooth 5.0 and setup was a snap-on multiple devices. Press and hold the power button until the earbuds inform you that the system is in pairing mode and just search for them on your smartphone or computer. Supported codecs include universal SBC, AAC for iPhones, and aptX Low Latency for Android devices.

To switch to a wired connection, users just need to put off one cable and snap in the other. The connections are directly on the earbuds with both the wires and the right earphone accented in red for the right side. Lining these up assures the wearer correctly has proper stereo sound each and every time without second-guessing. My personal, custom-molded IEMs that cost more than I’d like to admit don’t tell me left from right out of the box.

A benefit of having both wired and wireless cables is that Bluetooth headphones and earbuds are nearly worthless for music creation on a computer. The wireless latency makes adding additional live instruments to a track impossible because you’re almost always about a sixteenth of a beat off. Beyond that, even the best Bluetooth connection introduces compression to the sound, which is not something you want when hitting the right note is imperative.

And there are a few other drawbacks to the Bluetooth cable. The distance between the earbud and the Bluetooth module is slightly too short and hangs awkwardly behind your head with both the controller and battery element dangling behind your ears like large earrings. Also, the four-button control system could do with more diversity between the buttons to help the wearer determine which button they were about to push. I essentially had to memorize the locations of the buttons from top to bottom and rub my finger up and down the controller until I knew which button I was pushing.

As a commuter companion, however, the IE 100 Pro will block out the cacophony of public transportation sound while your phone sits securely in your pocket thanks to the snug fit and Bluetooth audio. Plus there’s multipoint support, in case you’re going to want to listen to tracks from two sources and don’t want to fiddle with settings over and over.

The audio coming from the Sennheiser IE 100 Pro earbuds was better than anticipated for the price tag. The frequency range of the monitors is 20 Hz to 18 kHz, which is pretty much what most humans can hear with a little shaved off the top and bottom. The sound pressure level (SPL) for these is 115 dB, which means they can get loud enough to drown out other noises on stage. Thankfully for the sake of my hearing, I never had to turn up the volume enough to come close to the threshold at practice, where the IE 100 Pro held their own against the wailing guitar to my right and the piercing keyboard amp to my left. The thunderous roar behind me is courtesy of a drum kit helmed by a man who has never met a cymbal he can’t strike with the energy of Thor. Despite that tsunami of sound barreling down on me in our cramped space, the IE 100 Pro performed valiantly. I doubt I would have any issues hearing my voice or synth on a very loud stage while keeping the IE 100 Pro at a reasonable level.

The sound the Sennheiser in-ear monitors did produce was warm, well-rounded, and delivered crisply both as monitors and Bluetooth headphones. Sennheiser gear in general is known for rich midbass and transparent midrange, and it’s here. The top end and low end do suffer some, though. Deep bass and pinpoint highs are squelched enough that musicians and DJs looking for a punchier, airier audio experience should look elsewhere and expect to shell out serious cash for that extra dynamic range.

For those that will use these more to listen to music than make music, the audio tuning of the Sennheiser IE 100 Pro is rather flat. There’s no low-end push like you’d find on a pair of Powerbeats Pro or the dynamic range of the Sony WF-1000XM4 in-ear earbuds (which we reviewed here). For musicians, it’s important to hear what’s happening as it actually sounds without digital processing. For everyone else, there may be a little energy missing but the clarity is good.

The IE 100 Pro’s Bluetooth module has a battery life of 10 hours according to Sennheiser. My battery tests nearly match that with it being just a few minutes below the mark when the headphones shut down. It’s enough for the commute to work on the train, tuning out your coworkers, and returning home at night. Plus you can always swap out the cable to plug the earbuds directly into your devices, assuming they have a headphone jack. And when you are back near an outlet, charging the Bluetooth cable requires a USB-C cable (included) and about two hours.

So, who should buy the Sennheiser IE 100 Pro?

It’s very easy to recommend these to musicians or DJs without the benefit of high-paying jobs, a trust fund, or a record deal. On stage, they sound far better than anticipated. They’re snug, comfortable, and the “acoustic stress,” aka noise, reduction means that at the end of a night using these your ears won’t have that familiar, unfortunate ringing that in the long run can destroy your hearing. The added benefit of the Bluetooth module means that the money spent on the Sennheiser IE 100 Pro IEMs will also pay dividends when you just want to listen on the go but not at a gig. And the money saved can go toward another case of musician-powering, sodium-rich Cup Noodles. And doesn’t getting more value sound like music to your ears?

is a freelance automotive and tech writer based out of Northern California. His work has appeared in Car and Driver, Wired, Engadget, Autoblog, Gizmodo, Outside, and a few other places he can’t quite remember at the moment. He’s currently in too many bands and is still waiting for an automaker to introduce a convertible EV.