Headphones vs IEMs vs earbuds: The differences, explained

Trying to figure out how what gear you need to get into the groove? We've got you ... 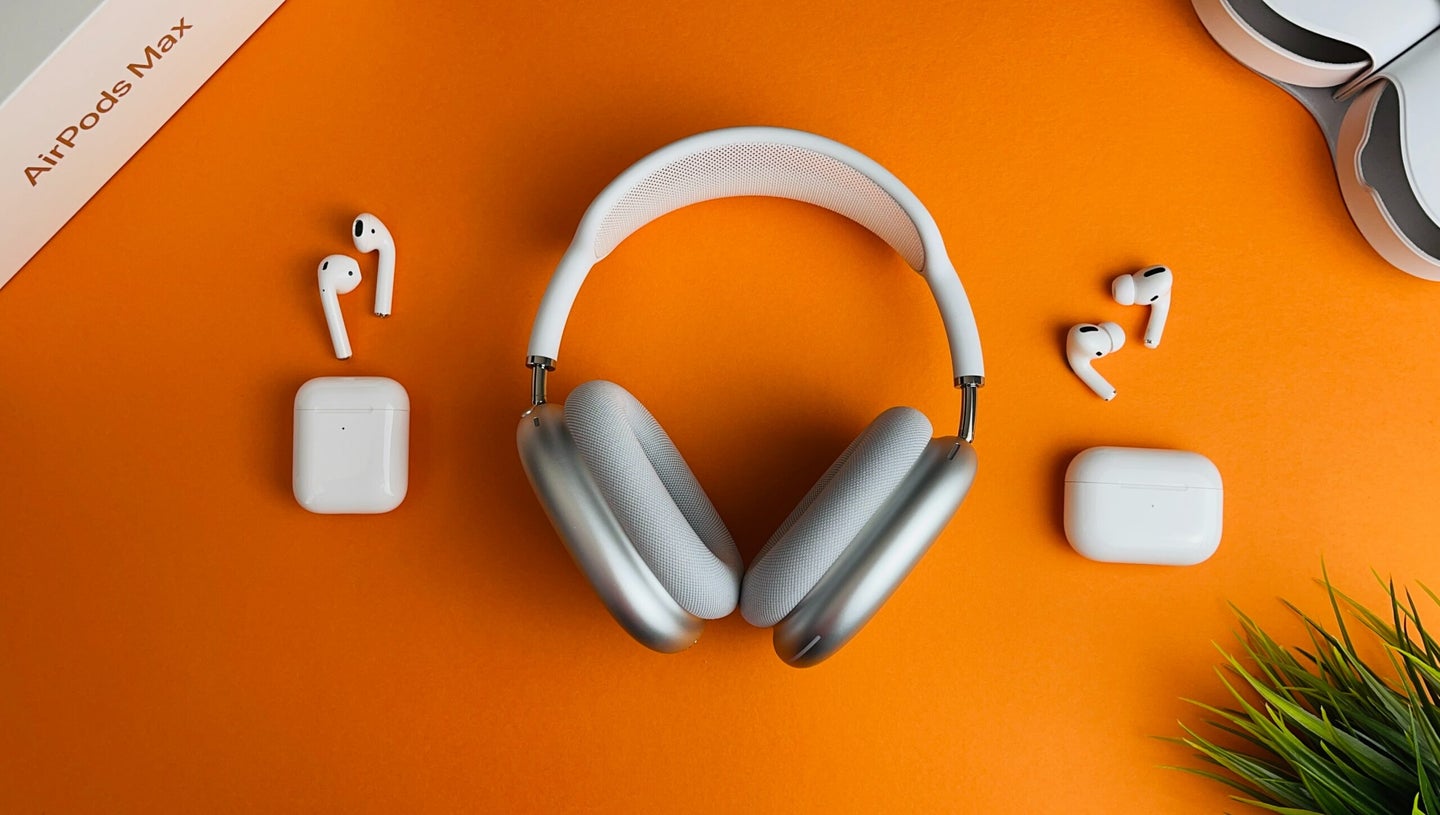 Earbuds, IEM, headphones ... personal audio is a choose your own adventure where there's no bad ending. Akhil Yerabati, Unsplash
SHARE

Whether your mission is to take calls, play games, dance to the drummer’s beat, or make your own music, a solid pair of headphones can be a faithful, life-enhancing companion for both work and play. With literally hundreds of options on the market, it can feel near-impossible for an average consumer to know what type of headphone could be the best for their needs—or whether the best headphone for them is actually an earphone. So let’s demystify the difference between over-ear headphones vs in-ear monitors (IEMs) vs earbuds to help you make the best decision.

In the simplest scientific terms, headphones are audio accessories that convert electrical signals into sound.

In more fun terms, they’re speakers you slap on your head. Headphones are fitted with miniaturized mechanics that are similar to what you’ll find inside of any speaker. The key parts to a standard headphone are a diaphragm, which most often looks like a traditional cone-shaped woofer, as well as a coil and a donut-shaped magnet that move the diaphragm. Those vibrations make sound waves.

How long have headphones existed?

The first stereo headphones were sold to consumers by the late 1950s, but telephone operators in England used ear cups to hear sound and keep their hands free to work circa 1890. A mono version of the headband concept that we still know today was used by the Navy starting in 1910.

How much do headphones cost?

With seemingly infinite choices on the market, headphones can easily range from two to four figures. Knowing that the average consumer isn’t likely to be shopping for headphones that will break the bank, our picks for the best budget headphones include options from $20 to $100, while more specialized selections, like the best headphones for mixing music, average in the several hundreds and can easily reach into the thousands.

One price driver of the category is music producer Dr. Dre, who introduced his Beats By Dre headphones as a partnership with Monster Cable in 2008 and almost single-handedly made his kind of oversized cans a required fashion accessory. Beats headphones introduced a more energetic, bass-heavy style of personal audio, which quickly caught on as all that low-end not only matched contemporary music, but also naturally helped drown out environmental noise while listening on the go.

So, how many types of headphones are there?

In terms of makes and models and capabilities mash-ups, the number of headphones is countless. But, ultimately, there are two types: Whether they’re wired or wireless, you can buy headphones with earcups that are either over-ear headphones (also known as circumaural) or on-ear (supra-aural) headphones.

For people who would like to have personal audio capabilities but don’t want to wear a headband, there are much smaller solutions than headphones. Instead, you can buy earbuds, which fit right on the outer part of the ear, or IEMs, which fit inside the ear canal. We’ll dive into those next.

What are the best headphones?

The ultimate choice for the best headphones will vary according to an individual’s personal style and objectives. A Bluetooth pair like the Sony WH-1000XM4 wireless headphones will keep you connected while avoiding being tangled in cords and it’s packed with tech that cuts down on distractions, such as active noise-cancelling. While audio purists will want headphones that still connect with a cable—preferably a detachable, upgradable one—and that forego all that extra circuitry. And they’re more likely to explore less traditional driver types, like planar magnetic headphones that use an extremely flat film full of almost impossibly thin wires suspended above (or sandwiched between) a flat array or two of magnets. This allows for bigger diaphragms (up to 100mm versus a traditional 30mm to 50mm dynamic driver) that can react exceedingly fast with lower distortion. The result? Big, rich sound, especially for bassheads that also crave precision. But even that technology has trickled down and can now be found in gaming headphones that retail for $400, not just audiophile headphones at $4,000.

You can distinguish earbuds from headphones aesthetically because most earbuds do not have a headband and are placed right in the outer part of the ear instead of resting over or on the ear. They stay in place, and block out external noise, thanks to silicone and/or foam eartips of various shapes and sizes that are traditionally supplied, possibly assisted by wires or wings that go over the top of the ear or nestle into its contours. Pro tip: Don’t be afraid to use a different size of eartip on each ear, as your canals may not match. And once they’re in your ears, earbuds connect to your devices in different ways depending on the type.

Wait, so there are different kinds of earbuds?

Earbuds are sold in three different categories. They can be wired, which includes a cord that you plug into a 3.5mm headphone jack (think the original white iPhone earbuds you lost or irreversibly tangled in your pocket); wireless earbuds, where the earbuds aren’t connected to your phone but are connected to each other; or true wireless earbuds, where there are no cables at all, like the now-ubiquitous Apple AirPods (or any of these feature-packed options).

How much do earbuds cost?

Our research has found earbuds ranging from under $25 to well over $1,000—it can certainly get expensive, especially if you decide to seek out a bespoke company that makes very exactingly crafted items in limited batches. Consumers are largely accustomed to paying prices at the lower end for earbuds.

What are the best earbuds?

Our guide to the best earbuds includes models that are suitable for workouts, music, gaming, and more. If taking meetings by day and immersing yourself in melodies at night are your priorities, take a look at the Sony WF-1000XM4 noise-canceling earbuds. Athletes may want to hone in on the Jaybird Vista 2 to get into beast mode. And if you’re on Team iPhone, you might want to take a look at the standard-setting Apple AirPods Pro.

Although they tend to look kind of similar when worn, in-ear monitors (or IEMs) are not the same as earbuds. They’re commonly confused, but there are fundamental differences when it comes to IEMs vs earbuds, including where they fit in your ear and audio quality—as well as how they transmit sound and protect your hearing. While some IEMs come with cables with device controls, the average music listener or taker of calls is most likely not going to use IEMs vs earbuds.

IEMs, vs earbuds, are designed to be placed deeper inside the ear and into the ear canal. Most earbuds aren’t made with protecting your hearing in mind and aren’t helpful in that department, but IEMs have superior noise isolation and are used by live performers and studio musicians to hear the audio they want clearly without having to push the volume to compete with the rest of the band plus the cheering crowd. On average, IEMs cut about 26 dB of external noise, though that number can go up into the 40 dB range depending on the depth of insertion, type of material, and quality of seal. This helps with the performance and to forestall the damage that comes with those professional lifestyles.

How well do IEMs fit?

An IEM can provide an exacting, yet comfortable fit, but it can require certain decisions. There are two ways IEMs fill your ear canal: custom-molded, where an audiologist takes a cast of the bends and a company makes an IEM that fits in exactly; or universal, which uses eartips to assure a secure fit. Custom molding involves goo pumped to set in your ears, shipping the results off, and then waiting a week to months, depending on the manufacturer’s backlog, for your customized set to be sent back. Universal IEMs are available from many sources, both consumer and boutique, but not all of them suit all ears (though they do have the bonus of being something you can resale, unlike custom-molded IEMs). And there’s a large secondary market for eartips, some of them very penetrating triple-flange designs that take getting used to, as well as other customizations to IEMs, which may include detachable, swappable cables, for example. That’s not something you find in earbuds.

So why go to all this trouble? Depending on the size and intention, IEMs can have multiple drivers of various types for far better audio quality than earbuds, which may manage a couple but typically rely on either one dynamic driver (a super-shrunk down version of the typical headphone cone) or a balanced armature, which is a mechanism originally invented for hearing aids. Dynamic drivers, which physically push more air, are known for a sound that’s bigger, richer, with visceral bass. While balanced armatures, which generate more nimble pulses, are known for quicker, airier tones representing precise frequency but with a less palpable feel. Hybrids combine the two, as well as other speaker types. Bigger isn’t always better, there are exemplary single-driver IEMs, though some of what are considered the best in-ear monitors have anywhere between five and 12 speakers per ear. If you’ve only used headphones or earbuds, using IEMs (vs earbuds or headphones) elicits a much more direct sonic sensation and experience you haven’t had before.

How much will you pay for IEMs vs earbuds?

Like earbuds, you can spend anywhere from two to four figures in pursuit of the best IEMs. Generally, however, the average price seems to sit somewhere in the mid-three figures.

What are the best IEMs?

If price is no object in your world, you could happily peruse the collection at an IEM designer such as JH Audio, including the entry-level JH/7 and the top-of-the-line Layla, and find a model that can be built to your specifications. Jerry Harvey of JH Audio, who has worked with other big-name IEM creators like Universal Ears, crafted the first multidriver custom in-ear monitor (which you’ll see abbreviated online as CIEM) for Van Halen co-founder and drummer Alex Van Halen to use while performing live, so you can get that rock star feeling and level of performance quality with these products.

And IEMs vs earbuds are still very much a part of the gigging musician lifestyle, they’re just more approachable than they once were. Custom-molded options can still be exorbitantly expensive, but universal-fit off-the-shelf options can be great starting at $100, like the Sennheiser IE 100. Though audiophiles have been in on the sector for quite some time, too, and can find pricey, powerful innovations like the Sennheiser IE 900.

A final word on headphones vs IEMs vs earbuds

Whatever type of assistance you use to bring sound closer to your brain—headphones vs IEMs vs earbuds—just free your mind and your ears will follow.