Apple just announced the next version of Mac OS X, the operating system that runs on all Mac computers. It’ll... 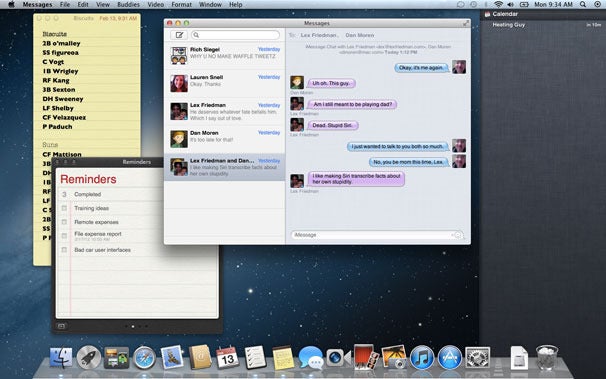 Apple just announced the next version of Mac OS X, the operating system that runs on all Mac computers. It’ll be called Mountain Lion, it’ll come out this summer for an unspecified price, and it’ll be chock full of the same apps you use on your iPhone and iPad. It’s one more stop on the way to Apple’s Ultimate Plan for Gadget Dominance (not an official title.): the convergence of Mac OS and iOS, which began in earnest with the current version, Lion.

We’re not going to go into a big long discussion of the new features; we haven’t played with the beta, like MacWorld has, after all. But some highlights include the migration of certain iOS apps, like iMessage (the free SMS-like messaging service; iChat will be renamed Messages and support the iMessage protocol), Notes, Reminders, and Game Center. There’ll be a new notifications drop-down box in the upper-right corner, sort of like the notifications that fold down from the top of the screen in iOS. (It’s also sort of exactly like Growl, the notifications app that’s been essential software for Mac users for many years.)

You’ll be able to share items directly to email or Twitter from certain apps like Safari, Preview, and Notes, the same way you can update Twitter directly from the Photos app in iOS. AirPlay will also come to the Mac, which, finally. AirPlay is the function in iPhones and iPads that lets you beam a song or video or photo right from your mobile device to an AirPlay-capable set-top box hooked up to your TV, like an Apple TV or Boxee Box. It’s awesomely futuristic, and it’s very welcome on the Mac.

Anyway, those are the highlights. Check out MacWorld for a more in-depth look. Mountain Lion is coming this summer sometime, in the Mac App store, just like Lion did. Judging by the past, we’d guess it’ll cost around $30, but that’s just a guess.