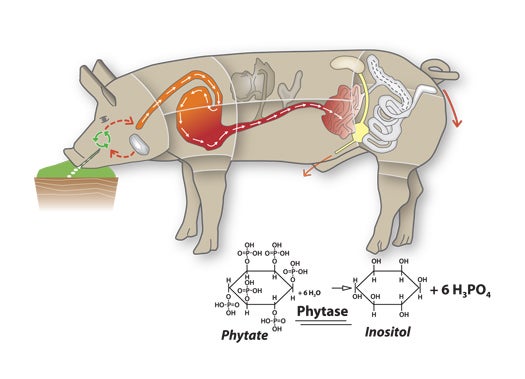 Like all animals, pigs’ cells need phosphorus to make DNA, build cell membranes, and transport energy. But pigs can’t digest phytate, a phosphorus-heavy molecule in grains, so farmers fortify pig feed with pure phosphate or phytase, an enzyme that breaks usable phosphate off phytate. Still, pigs excrete nearly all the phosphorus they eat, and this washes into the ocean, where it feeds bacteria and algae that create oxygen “dead zones,” a major killer of marine wildlife.

The Enviropig is the first swine (a Yorkshire, to be exact) able to digest phytate on its own. The project started a decade ago when Cecil Forsberg, a biologist at the University of Guelph in Ontario, genetically modified pigs so that their salivary glands would secrete phytase. This allows the pigs, now in their eighth generation, to get their phosphate from grains alone, and to excrete about 40 percent less of it.

Switching to Enviropig herds will be expensive for farmers, Forsberg says, but in the long run subtracting supplements will save $1.75 per pig annually—a windfall for a 100,000-pig farm. He is currently petitioning the U.S. Department of Agriculture and Health Canada for permission to serve Enviropig meat. “Unfortunately, it is illegal for us to do taste tests at this time, despite the temptation,” he says. “But I expect they’ll taste quite good.”

1. Make the enzyme
As the pig chews, the Escherichia coli genes implanted in its salivary glands begin promoting phytase production.

2. Break up the pollutant
Phytase begins breaking phytate into digestible phosphate in the mouth, but it really ramps up its activity when it hits the stomach’s strong acid.

3. Poop and pee away!
Because they don’t need phosphate supplements, Enviropigs excrete 30 to 65 percent less phosphorus.