Underground Radon Detectors Could Forecast Earthquakes Days Before They Happen

Toads. Clouds. Radon gas. Scientists have studied the movement of each of these in desperate attempts to improve earthquake detection... 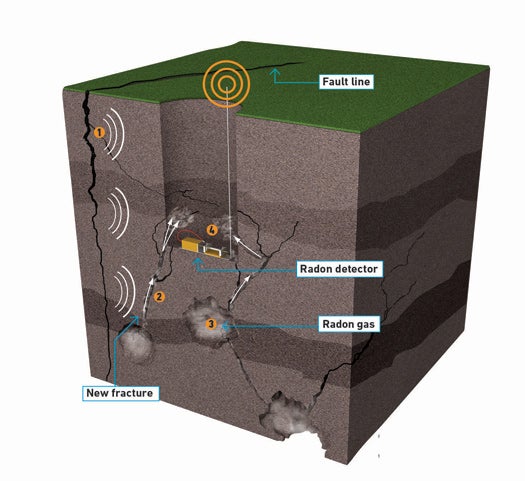 Toads. Clouds. Radon gas. Scientists have studied the movement of each of these in desperate attempts to improve earthquake detection methods by even just a few minutes. Now there’s a technology to test the radon theory for good and possibly give warning days before a quake.

As uranium in the earth decays, it emits radon gas, some of which collects in pockets underground. Some seismologists hypothesize that earth shifts imperceptibly in the days before a quake, causing fractures that puncture the pockets and release more radon. But it would take a lot of data to test the theory.

Earlier this year, Vladimir Peskov, a physicist from CERN Laboratory in Switzerland, unveiled the first radon detector inexpensive enough to install by the hundreds. Standard scientific radon detectors inject air samples into a closed chamber of argon gas in an electric field. Radon decays into radioactive particles that alter the charge of the argon, and the detector reads this change to determine radon levels. This closed system eliminates other interactions from being read as radon, but it costs $15,000. Peskov increased the gradient of the electric field in the chamber of his device, allowing it to identify subtler changes as air breezes through it. It costs $60, he says, and it works as well as the more expensive models.

Peskov hopes to attract funding for placing detectors along active fault lines in Italy, starting as early as next year. If the theory works, the detectors could form the beginning of a permanent warning system.