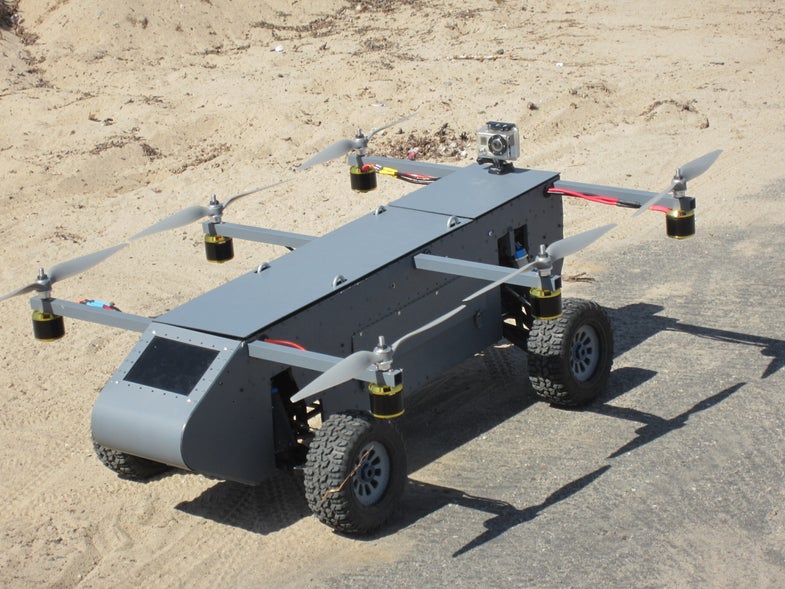 What, exactly, is the best body for a robot? Flying is energy intensive, and most commercial drones can only go about 20 minutes on battery power. Driving on wheels is more energy-efficient, but limits the robot purely to what it can find on the ground. The Panther drone, by Advanced Tactics, combines both into one tidy package.

And can do it all in high winds, and while carrying a maximum of 15 pounds. Its makers boast that it is ideal for pipeline inspection, and with the ability to travel almost 60 miles on the ground, as well as hopping over small obstacles, it’s certainly nimble enough for some field work.

Advanced Tactics first tested a version of the Panther in 2012, and last week released a video of the new, commercial model driving and flying as part of a presale promotion. The Panther is an interesting, novel drone design, but it’s also a test case for Advanced Tactics far more interesting vehicle: the larger, human-carrying Black Knight Transformer. With a similar wheels-and-rotors configuration, the Transformer was floated in 2014 as a possible medical evacuation vehicle for the military.

For now, Advanced Tactics appears to focus on the Panther. If the little drone takes off, maybe someday the larger, drone-inspired flying truck will, too.