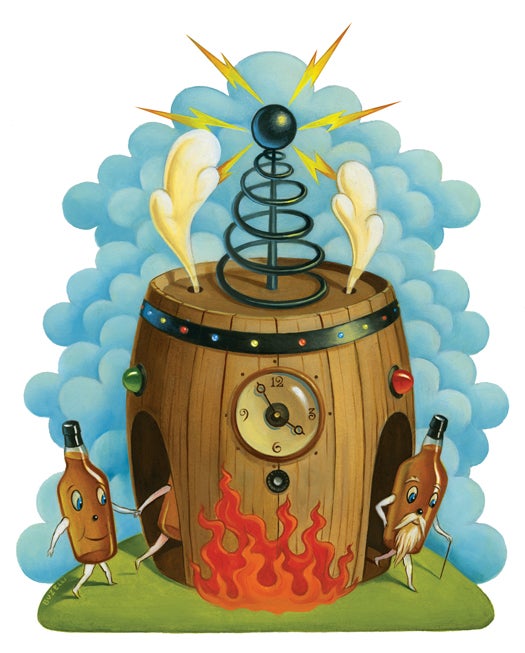 It takes only 48 hours to distill a barrel of whiskey. The next decade is spent making it taste good. The liquor undergoes constant chemical changes, some from the charred oak of the barrel itself, which acts like a sieve, trapping the large-molecule forms of alcohol (methanol, butanol) that give young whiskey such a rough edge. The process takes years, and as a result good whiskey is old and expensive.

Four-year-old bourbon runs about $20 and tastes OK. But a truly delicious bourbon out of its teens will easily fetch $200.

I like whiskey, but I also appreciate a deal. So when I heard that Orville Tyler, a retired chemist from South Carolina, had invented a way to radically accelerate whiskey aging, I was intrigued. Tyler says his Terrapure process can produce reactions within hours that ordinarily require years. I’d heard about all kinds of tricks for improving liquids—the bottlers of H20m water, for instance, invigorate their drinks with Buddhist mantras. Tyler’s company, Terressentia, seemed a little less snake-oily than that. With about 50 corporate customers, mainly hotel and restaurant chains that use the process on their private labels, it must be doing something right. So I sent Tyler’s team a sample of four-month-aged whiskey, and they promised to put it through their time machine.

Some distilleries attempt to speed up aging by using small barrels, which increases the liquid’s ratio of surface area to volume, exposing more of the liquor to the influence of the oak. The technique gives young whiskey a gorgeous ruddy color, like strong tea. It also makes it sweeter and slightly mellower—but hardly enough to temper the underlying harsh taste of young alcohol, like caustic runoff from a sawmill. It takes more than wood to make whiskey palatable. Compounds in the spirit such as isopropanol (harsh on your tongue and, the morning after, on your head) need time to react with fatty acids, leaving behind esters, the aromatic compounds largely responsible for giving fruits their odor and flavor.

A week after I sent in my four-month sample, Earl Hewlette, the CEO of Terressentia, delivered my processed whiskey in person. I poured a taste, alongside a sample of the original, “un-ultrasonicated” batch. The color of the two liquids was identical, but the original gave off a strong whiff of boozy vanilla. Sipped, the processed sample was smoother than the original, and glyceride molecules, newly formed out of fatty acids, let it linger on the tongue rather than evaporate in an astringent haze. The wood flavor still whacked like a two-by-four, but all the drink’s harsh edges were rounded away. Not bad for 12 hours’ work.