Not even geckos can stick to Teflon (and other slippery facts)

One of the many amazing inventions that came about by accident. 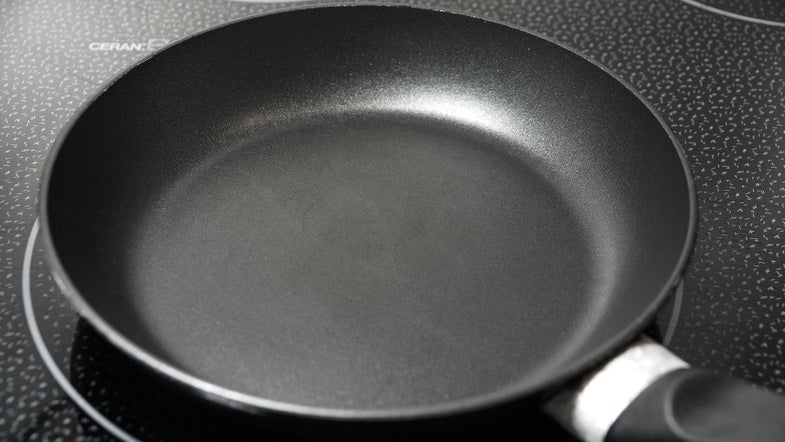 Roy Plunkett doesn’t sound like a man destined for greatness. And in a way, he wasn’t. Plunkett gave us the technological marvel that is Teflon—but he did it accidentally.

As an engineer at DuPont, Plunkett was tasked with making a new refrigerant. His experiments with tetrafluoroethylene gas hit a small snag when the pressurized gas turned into a plastic-y material inside the bottle. Oops. The solidified substance was no good as a refrigerant, but when Plunkett cut open the canister he realized something: this stuff was super slippery. And slippery stuff is useful.

Thus began the Teflon saga. This week marks 80 years since Plunkett made his happy discovery, so let’s just all take a moment and appreciate what a wonderful thing Teflon is. To start with, there’s this delightful video of a gecko trying and failing to climb the walls of a non-stick pan:

Geckos are able to stick to almost everything because their feet take advantage of van der Waals forces, which are the tiny attractive forces between atoms and molecules. Van der Waals forces are pretty much everywhere, and so geckos can stick pretty much everywhere. But not to Teflon (otherwise known as polytetrafluoroethylene, or PTFE—”Teflon” is the name brand for the PTFE that DuPont produces). Teflon doesn’t get those forces because of its chemical structure. Yeah, we’re gonna nerd out here for a sec.

Teflon is basically composed of long strands of carbon atoms coated in fluorine molecules, a bit like a wire with a protective layer on the outside. Fluorine is an extremely electronegative element, meaning it attracts and holds electrons strongly. When bound to carbon, this means that some of the electrons surrounding the carbon atom are drawn out toward the surrounding fluorines. In fact, they’re drawn so strongly that they pretty much stay over near the fluorines, creating a strong negative charge all along the outside of the molecule. Van der Waals forces depend on being able to induce a positive and negative end of a molecule or atom, but the layer of fluorines in Teflon just have this permanent negative charge to them. The electrons stay in one place.

The chemical structure is also why it’s so nonreactive. Carbon normally reacts with just about everything, but when it’s encased in fluorine molecules it can’t physically access any other atoms in order to react.

All this means that gecko feet aren’t able to physically get a grip on Teflon, just the same way water and oil can’t adhere to the coating. Polar and non-polar molecules alike can’t attach if there’s just this even, negative charge all across the surface.

Incidentally, ants also can’t climb on Teflon, which makes it quite useful for researchers who study them. Just spray some Teflon onto the edges of the ant habitat and you can leave the box open all day—they’ll never be able to escape.

And Teflon’s incredible inertness makes it useful in a lot of other ways. The Manhattan Project took advantage by sealing gaskets with it in order to contain the uranium they were working with. Telfon is nonreactive, resistant to corrosion, and super-low friction. Coat a pipe in it and you can pump any gas through—even super-reactive fluorine gas—without fear of a cross-reaction. Liquids slide right through, even corrosive ones.

Because it’s hydrophobic, you can also spray Teflon on clothing that needs to stand up to lots of spills and resist stains. Some school uniform companies use it for that reason. Make a thin sheet of Teflon, stretch it a bit to form tiny pores, and you have a lightweight, breathable layer for a waterproof jacket—otherwise known as Gore-Tex.

Powderize Teflon and you can spray it on anything as a lubricant. The Rubik’s cube speed-solver’s wiki recommends several PTFE-based sprays that you can use to “lube your cube” for faster twisting.

Dentists coat their tools in Teflon so they don’t stick to filling materials, and sometimes use it to cover up surrounding teeth lest they get covered in filling goop.

Some ski bindings—the bits that attach your boots to your skis—have Teflon coating so shoes slide out easily upon release. It’s even in some nail polish to give it a nice smooth, even finish.

Pretty much anywhere you want to remove friction, you can find Teflon. It can lube up any machine, line any hose, and seal any gasket. It’s about as close to magic as you can get.

And, contrary to popular belief, it doesn’t give you cancer. There is a certain class of molecules, called perfluorooctanoic acids (PFOAs), that used to be involved in the production of Teflon and that might be carcinogenic. But studies found there were only miniscule quantities of PFOAs in non-stick pans themselves—nowhere near the amount shown to cause cancer in rats. PFOAs are an environmental hazard, though, which is why the Environmental Protection Agency now regulates them. You just don’t need to worry about your non-stick pan unless it starts flaking off. The flakes won’t kill you, but it’s generally inadvisable to eat chunks of Teflon. The cost of a new pan will be worth it.

So go ahead and cook your egg stick- and worry-free. Teflon is a beautiful thing.