An ode to the best of the automated accounts. 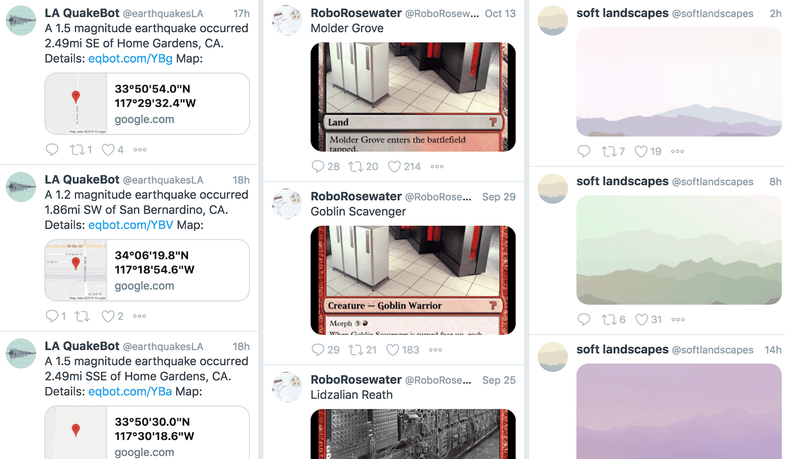 All my friends are bots. Eleanor Cummins and her incredible screenshotting abilities
SHARE

Twitter is cracking down on bots. A fundamental part of the social media platform’s appeal, these automated accounts provide information—and comedy and artistry—in ways that are totally acceptable under the site’s terms of service. Twitter’s API, which helps external software meld with the site, supports users in building their own, leading to a lively newsfeed that’s part human, part machine.

Bots are under intense scrutiny, as any news consumer is sure to know. Over the last quarter, Twitter erased 9 million of these robo-users (and perhaps a few real people with bot-like habits by mistake) in an effort to “improv[e] the health of the public conversation.” Fake accounts like these have long been criticized for artificially inflating celebrity followings and generally annoying real users, but the recent spate of deletions is a response to fake accounts exerting undue influence on national politics. As such, the mass bot massacre is expected to continue for the forseeable future.

The health of the public conversation is eminently more important than fun, on that we can all agree. But we must remember that not all bots are bad. In fact, in some ways they’re better than a lot of humans, because they’re reliably creative, helpful, or funny. They’re literally designed to always deliver.

Bots date back to the 1980s, when programmers using a service called Internet Relay Chat began making user profiles to serve narrowly-defined, pre-programmed functions. The human user could ask the bot for date and time, for example, and the bot could provide. Soon, they were serving essential internet functions, like providing backup to Wikipedia’s human editors (bots can flag possible copyright violations, or add links to stories) and trawling sites to for Google and its search engine.

As the bot’s domain has expanded, so have the tool for its creation. Many bots are still built with basic programming languages, like this DIY bot made with NodeJS that will respond to text messages. But the most sophisticated bots are actually artificial intelligence, cannibalizing existing information, running it through a neural network, and spitting out novel ideas or images based on what it’s learned. A recent example includes this bot that turns words into strange, grainy, and theoretically-related images.

On Twitter, bots occasionally provide a service. PopSci‘s engagement editor loves Thread Reader App (@threadreaderapp), which will unfurl a series of threaded tweets when you provide it with a link, for obvious, work-related reasons. And information junkies or concerned citizens may benefit from things like the LA QuakeBot (@eathquakesla), which tweets every earthquake in Los Angeles.

More often, though, Twitter bots brighten an otherwise ragged newsfeed with a bit of artistic revelry or comedic relief. Soft landscapes (@softlandscapes) shares a pastel image of abstracted scenery every 6 hours. Magic Realism Bot (@magicrealism) sends out erudite Mad Libs, like “An artist defecates silence,” or “In Kiev is a beach where every grain of sand is a supermarket,” also at regular intervals. And Science Friday director Charles Bergquist’s bot Newfound Planets (@I_Find_Planets) is a slow-burning intergalactic fever dream. A recent description of a faraway destinations declares: “You have discovered a planet. The mist is airy and smells strongly of nutmeg. It gives me hope.”

If none of these bots appeal to you, well, that’s just fine, because the biggest appeal of bots is that they’re near-infinite and varied—there’s something for everyone. Magic: The Gathering fans, for example, can share fake, neural-network-derived cards from RoboRosewater (@RoboRosewater) until they’re doubled over with laughter, and non-fans will never even know about it. The same is true for people seeking identity-based humor, or whatever sub-genre of comedy encompasses tweeting—and retweeting and retweeting—random lyrics from the song “Africa” by Toto.

And if you can’t find what you’re looking for, that just means it’s time to build it yourself.