Tested: An App That Authenticates You By The Shape Of Your Ear

A taste of the biometric future 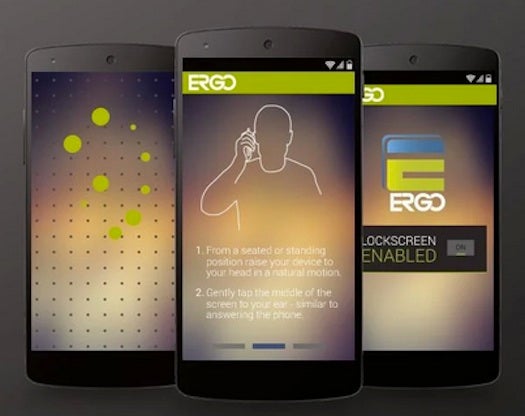 How unique are your ears? Maybe only Mom ever noticed them before, but, according to Michael Boczek, the particular way your ear touches your phone when you use it is unique to every person. Boczek’s startup, Descartes Biometrics, has developed an app that lets you sign into your phone not with a PIN or a swipe pattern, but by touching your ear to the screen.

“Ergo is the first ear biometric authentication technology for Android smartphones,” Boczek tells Popular Science. The app is supposed to recognize people using a combination of cues, including the way their ears and cheeks press the touchscreen and the speed and tilt with which they bring their phones up. Everything works with what’s already on their smartphones. “One of the things we’re most proud of is there’s no additional hardware required,” Boczek says.

So this is a very cool idea, but I found the implementation still a bit rough when I tried it for a day. Perhaps it will get better with time, or perhaps the way I touch my ear to my phone screen is just wildly inconsistent. In any case, Ergo would recognize my ear sometimes and not other times.

Ergo offers several ways to make its identifications more accurate, but they didn’t work for me. For example, I tried putting Ergo in a more lenient setting—one that would let me into my phone even if my ear scan wasn’t as close of a match as required in a more secure setting—but that didn’t always help. Once, I set Ergo on minimal security and asked my roommate to try it. Ergo let her into my phone. Ergo did lock her out when I raised the security, but then I couldn’t get in. Earlier in the day, Ergo wouldn’t let me in on a minimal setting, either.

I tried scanning my ear several extra times throughout the day in Ergo’s “add extra scans to your profile” mode, in hopes of teaching it more about my ear. Sometimes the app would tell me my scan didn’t match what it already had stored about me. How could it be different? Isn’t it still the same ear?

Like some others working in biometrics, Boczek talks about one day getting rid of passwords and PINs and having devices recognize their owners by their biology, whether their fingerprints, their ear prints, or something else. It seems that day is distant yet. Meanwhile, Ergo is cheap and fun to try, although I found it generally more inconvenient than my old swipe pattern. Maybe you’ll have better luck. It’s available for $3.99 for Android devices only.