One Scientist’s Battle With Canal Street 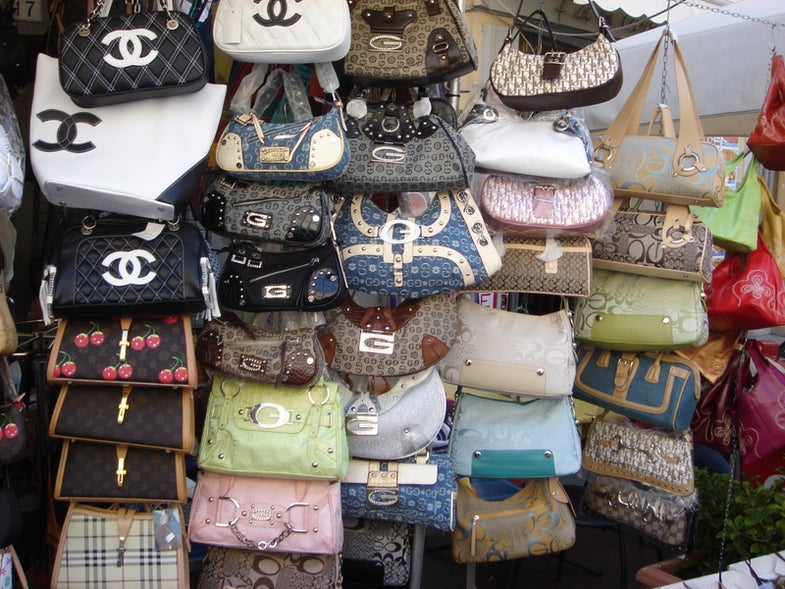 In peaceful Ithaca, New York, a four hour drive upstate from Manhattan in weekend traffic, there’s a lab conducting secretive anti-counterfeiting research. Scientists there are waging a stealth battle against Canal Street, using microscopic fibers to make the suitcases full of fake Fendi and Prada (or should I say Ferdi and Parda?) purses worthless.

Juan Hinestroza — the Cornell textile scientist I first met while working on my post about structural coloration — heads up the operation, but he’s enlisted the help of Dr. Ken Kuno of the University of Notre Dame, a biochemistry expert, and Dr. Carlos Rinaldi from the University of Florida, who specialized in biomedical and chemical engineering. Hinestroza can’t reveal the clients he’s working on the project for but, he says, “You know which brands you see on Canal Street.”

Fendi, Prada, Louis Vuitton, Chanel, Coach, Burberry. Kate Spade. Gucci. It’s easier to find a knock-off handbag (or watch, or scarf, or sunglasses) than it is to find the real thing, and all you have to do to find the real thing is walk into a store. The fashion industry has made sincere efforts to crack down on the fashion counterfeiting industry, but producing a bunch of totes bags that say “You Can’t Fake Fashion” doesn’t exactly pull a massive illegal industry to a screeching halt. Counterfeit consumer products make up 8 percent of China’s GDP. Gucci has already sued 30 websites like eBay for selling knockoffs, and is in the process of suing 100 more.

What makes it so easy to knock off fashion goods, specifically, is how hard it is to trademark fabric patterns and fashion designs. Impossible, basically. Christian Louboutin just won one of the first major fashion trademark lawsuits. It took years to win, and his fire-engine-red shoe soles are probably the most iconic branding in modern fashion. On top of that, manufacturing technology has become so inexpensive and knockoffs so precise that they’re often almost impossible to detect visually.

So Hinestroza and his cohorts came up with a detection method that’s sub-visual. “You can make signatures by coating individual cotton fibers [with nanoparticles of metal], like a barcode,” said Kuno. The signature can’t be seen or felt, but if the garment is scanned with a magnetic device it can carry information about who made it, where it was shipped from, anything a normal barcode can communicate. The code can also take the place of those large anti-theft tags on clothes by setting off theft detectors at the door if it’s not deactivated at the register.

Hinestroza hinted that the U.S. government has also expressed interest in his technology, possibly for use in money, which contains cotton fibers too. But even within the fashion industry, secrecy is the whole point. While the technology to create nanoparticle signatures is still laborious and expensive, if counterfeiters find out which brands use metallic signatures they may devote more resources to copying that trademark as well. It’s a ruthlessly successful, multi-billion dollar industry. They’re not likely to give up easily.

Several parties are working on blocking counterfeit clothes in other ways, though. A company called Applied DNA Sciences launched a product last week called “SigNature T,” which is strikingly similar to Hinestroza’s method. “SigNature T DNA becomes bound to the fiber,” the company’s press release stated, “…and can be marked and tracked throughout the supply chain…providing a means to authenticate anywhere along the supply chain, from fiber to the finished product; from distributor, to retailer, to consumer.”

Hinestroza said he’s not sure exactly how Applied DNA Sciences’ technology works, but the difference, he said, appears to be the ease of functionality. “In our case the nanowires can confirm the authenticity using simple supermarket scanners and other lasers which make it easier to implement,” he explained, while reading a DNA marker would require more expesive equipment.

In addition, the House of Representatives passed the Textile Enforcement and Security Act in November, a bill that will increase screening of imports and attempt to stop imported fakes. Then again, without technology like Hinestroza’s, it might be impossible for port agents to tell what is fake and what isn’t.

Note: This post has been updated to reflect that counterfeit consumer products_ make up 8 percent of China’s GDP, not counterfeit fashion alone._