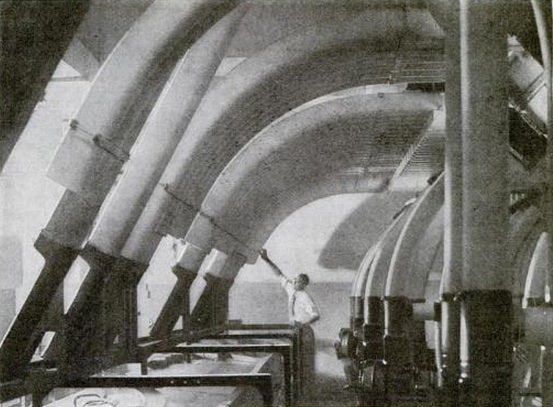 A restaurant in Christchurch, New Zealand, plans to install a pneumatic tube system for delivering sliders and a “wee packet of chips—um, fries,” as chef Richie Ward explained in a video.

The food, which will come enclosed in stainless steel capsules, will go barreling through the tubes at 87 miles per hour (140 kilometers per hour). Air brakes will slow the capsules to a safer speed before they drop down from above patrons’ tables, or rise up from below the tabletop, depending on the location of the table. The whole system will take a year to install and test, New Zealand’s The Press reports.

Our favorite thing about this story is that it could have appeared in any given issue of Popular Science published over, oh, the last 130 years or so. Our predecessors loved pneumatic tubes. In 1874, Popular Science published a description of London’s Pneumatic Dispatch “for the conveyance of small parcels of goods from place to place.” A 1949 feature on Brookhaven National Laboratory’s nuclear reactor includes diagrams of its pneumatic tube system. And in 1930, the magazine published a feature about pneumatic tubes used for transporting everything from coal to wheat to mail. (You can still see those now-dormant mail systems in older New York City office buildings; at the time, they were new.)

Surely past Popular Science editors would have loved a tube burger-delivery system. After all, they were into futuristic eating/cooking schemes, too. Witness this 1921 report on a slot-machine restaurant, or the burger-making timesavers the magazine has published over the years.