HPV tests can replace most Pap smears, according to new recommendations

If you are in possession of a cervix, here's what you should do. 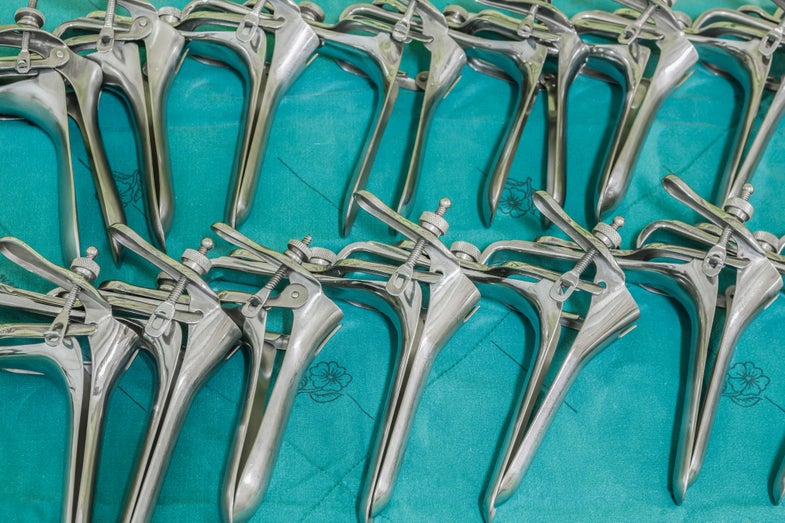 Pap smears could be a thing of the past—at least for some patients. An update to the official recommendations for cervical cancer screening now includes the option to get a different test, one that looks for a virus rather than for abnormal cells.

Most women right now get a Pap every three years, likely when they visit their gynecologist or possibly when they see their primary care physician. That’s the current recommendation, though it’s only been that way since 2012. Prior to that, patients were advised to get a Pap smear annually, but after looking at the data officials realized they could achieve the same effectiveness with fewer tests, which also meant fewer false positives. False positives trigger further testing, which subjects patients to more risks—any surgery or medical procedure carries some small amount of risk—so agencies in charge of screening recommendations want to avoid as many as possible.

The Pap smear involves taking a sample of cells from a person’s cervix, then sending those cells to a lab so an expert can look at them and determine whether any are abnormal. Abnormal cells can indicate potential cervical cancer, but it’s also kind of a catch-all term for any cells that don’t look standard. Healthy cells have a certain shape and look to them, while cells infected with viruses or that are beginning to turn into cancer look different. Sometimes previously thin, flat cells become fatter, or square cells become rounded. Not all physical changes to cells indicate cancer, so sometimes an abnormal Pap smear will turn out to be innocuous. Generally you need to get another round of testing done to determine whether the abnormality is worrisome.

That method has been our primary method of detecting cervical cancer since it was introduced 75 years ago, but more recent evidence suggests we could instead screen for the virus that causes 90 percent of all cervical cancers: human papillomavirus, or HPV.

“There’s new evidence in the last five years that the HPV-alone option is very effective,” says Doug Owens, a vice-chairperson for the U.S. Preventive Services Task Force (USPSTF) who worked closely on these recommendations. He notes that all three methods—HPV only, Pap smear only, and a combination of the two—are highly effective at catching cancer, so it’s not so much a question of what’s best as it is what’s best for you. The only advice that holds true for anyone in possession of a cervix? Get some kind of test. “The most important message is that screening prevents deaths from cervical cancer,” he says. “You can identify it when it’s still treatable, so it’s very important to be screened.”

The USPSTF is responsible for making recommendations like this, about who should get screened for which diseases, how, and how often. They compile all the relevant research, analyze it, and figure out what will do the most help overall. They try to ensure that testing recommendations are conservative enough to catch most cases of a disease, while minimizing the risk of false positives or unnecessary treatments for extremely early-stage conditions—which becomes more likely the more often people get screened.

In this case, they decided that while Pap smears are still safe and effective, there are other options that some people may prefer, and those options are just as good. But it’s a little more complicated than that.

Do I still have to get Pap smears?

Maybe, maybe not! If you’re 21 to 29 years old, the answer is yes. “The reason we recommend Pap smears is that in younger women HPV infections often clear on their own,” explains Owens. “You’d end up finding a lot of infections that would go away on their own anyway.”

People age 30 and above, however, tend to have HPV infections that linger and can turn into cervical cancer. That’s why testing for the virus becomes a viable screening option once you get a bit older. Once over that limit, you could opt to continue getting Pap smears every three years, or you could decide to switch and just get HPV testing every five years. You could also choose to do both every five years. “We think these are all pretty equivalent options,” Owens says. “The choice between them is really just a discussion between you and your clinician.” He says one of the reasons they provided a range of options is so that the maximum number of patients would have one of them available. During the public comment period, Owens says they received a number of responses noting that HPV testing alone may not be available everywhere, so they opted to keep all options open so that everyone would be able to get tested.

Anyone over 65 who doesn’t have a prior cervical cancer diagnosis and isn’t otherwise at high risk (talk to your doctor about whether you might fit that latter category) doesn’t need to get any kind of cervical cancer test. For these people, the USPSTF determined that the benefits don’t outweigh the risks. The potential for a false positive isn’t worth any cancers you might catch by screening that population.

Can I get cervical cancer if I don’t have HPV?

Yes, unfortunately. More than 90 percent of all cervical cancer is caused by HPV. The virus enters cells and forces them to make proteins that ensure the virus’ survival. Unfortunately these proteins interfere with a cell’s ability to monitor its own growth, and if the immune system doesn’t eliminate them they can multiply rapidly, accumulating other mutations along the way, and eventually turning into cancer.

But that leaves around 10 percent of cases that arise by some other mechanism. Cervical cancer can run in some families, for instance, and many other risk factors increase your chances. Smoking, HIV infection, having a weakened immune system (either from chronic disease or immunosuppressive medication), chlamydia infection, eating a diet low in fruits and veggies, and being overweight all seem to increase your risk for cervical cancer. So does having a full-term pregnancy before age 17, as well as having multiple full-term pregnancies. It’s not entirely clear yet why those last two influence risk, but it likely has to do with the hormonal changes that a person’s body undergoes during pregnancy.

Even if you get cervical cancer not related to HPV, though, it’s still enormously helpful to get regular screenings. “The cervical cancer cases that do occur are primarily women who have not been screened,” Owens explains. There are many cancers for which catching the tumor early doesn’t actually help patients live longer (prostate cancer is among them, to some degree), but cervical cancer is one of the ones that truly can be prevented. Screening helps doctors catch cervical cancer early on, sometimes before it even becomes a fully-fledged cancer, and spotting it at this stage prevents deaths.

Will I definitely get cervical cancer if I get HPV?

Nope! HPV is a blanket term for a family of more than 100 varieties of virus, most of which don’t cause cancer. Some strains cause genital warts or regular warts or even plantar warts. Some cause other kinds of cancer, like those of the penis, vulva, vagina, or anus. About 79 million American currently have HPV and 14 million of us become newly infected every year. It’s so common that the Centers for Disease Control notes that “almost every person who is sexually-active will get HPV at some time in their life if they don’t get the HPV vaccine.” Only 12,000 people are diagnosed with cervical cancer each year, which means the vast majority of HPV infections don’t lead to cervical cancer.

Should I get the HPV vaccine?

Yes, yes, a thousand times yes. The Advisory Committee on Immunization Practices recommends that all people up to age 26 get the vaccine. You can still get it above that age, and some countries like Australia recommend vaccination up through age 45, but the vaccine may be less effective once you become sexually active and have been exposed to HPV already. Plus younger people just get better protection from vaccines. That’s why the recommendation is to begin vaccination at age 11 or 12, before most kids would be sexually active, and for older teens to receive three doses rather than two.

It is also worth noting that the HPV vaccine doesn’t protect against all forms of HPV. The original Gardasil shot protected against four strains which cause 70 percent of all cervical cancers. Starting in December 2014, Gardasil 9 has protected against (you guessed it) nine strains, and covers 93 percent of cervical cancers. It also protects against 90 percent of genital warts, plus a number of other types of cancer.

Should I get the new vaccine if I’ve only had the old one?

No, at least according to one of the professors involved in the study of Gardasil 9 in Australia. Since the original vaccine already covered most of the highest-risk HPV strains (and because the vaccine is less effective in older people), there’s no need to go back and get more shots.