Can a DNA Test for HPV Replace the Pap Smear?

A new test for HPV has been cleared as way to screen for cervical cancer, but doctors are concerned that it doesn't do enough to protect younger women. 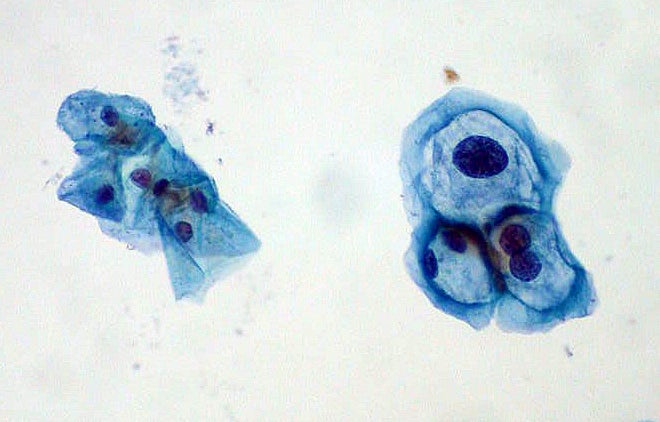 The clump on the left are normal cervical cells. The ones on the right are infected with human papillomavirus, a frequent cause of cervical cancer. Ed Uthman via Flickr CC
SHARE 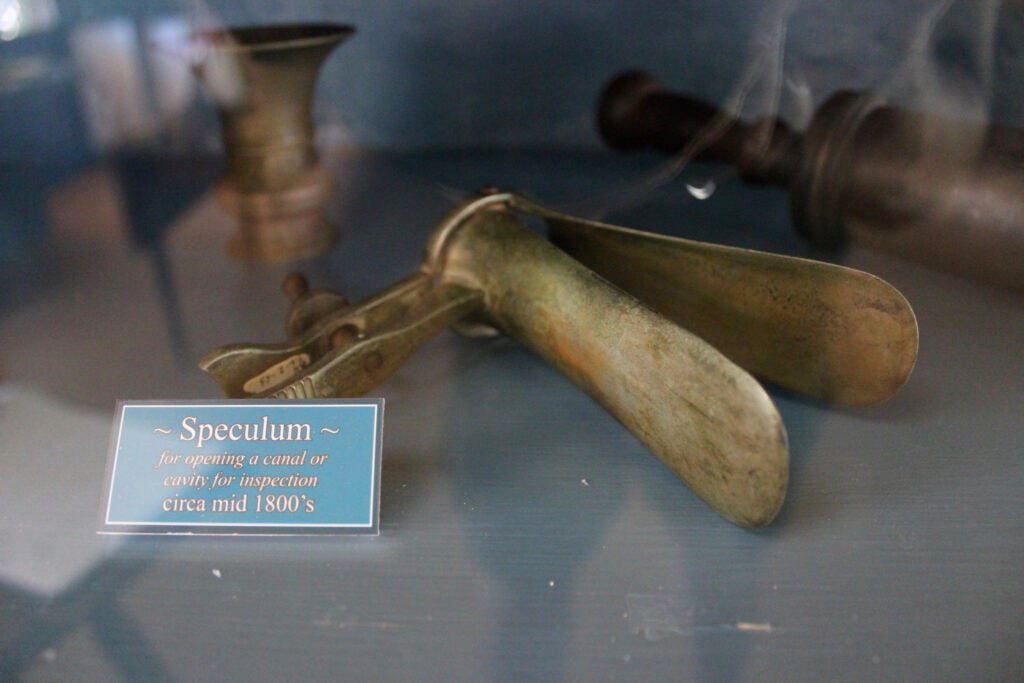 Causing discomfort in women for hundreds of years.

By its name alone, the Pap smear sounds like an uncomfortable procedure. Say it aloud: Pap smear. And it’s not too pretty to experience either. You put on a paper dress, slip your feet into stirrups, and spread your legs so a gynecologist can insert a metal duck-bill-shaped speculum (which, if you’re lucky, she’s has taken care to warm up beforehand) into your vagina. Then she swabs your cervix with a long Q-tip to collect a few cells, which she’ll examine under the microscope for abnormal growth that could develop into cancer.

It’s a procedure inconvenient and uncomfortable enough that many women chronically avoid having it done, despite the recommendation to get the cervical cancer test every three years. But it’s incredibly important for women’s health: since the Pap smear’s introduction in the 1950s, cervical cancer diagnoses and deaths have gone down 60 percent, saving thousands upon thousands of lives.

But the classic test now has some competition. In late April, the FDA approved a new test to be used interchangeably with (or replace) the Pap smear to screen for cervical cancer. Where the Pap looks for early signs of cancer in cervical cells, the new test, called the “cobas HPV test,” looks for a common cause of cervical cancer: human papillomavirus (HPV). HPV is a very common sexually transmitted disease, carried by 40 percent of U.S. women ages 14 to 59 at any given time, that causes around 90 percent of all cervical cancers.

The clump on the left are normal cervical cells. The ones on the right are infected with human papillomavirus, a frequent cause of cervical cancer.

The premise is logical: Instead of waiting for cervical cancer to develop, go after the cause to nip it in the bud. And according to Roche’s clinical trial data, their new test is better than the Pap smear at identifying early signs of cervical cancer in women older than 25 years.

However, the trial may have overlooked a particularly high-risk group: young women between the ages of 25 and 29. So says a coalition of 17 patient and women’s health groups, which sent a letter to the FDA opposing the test’s approval. As a group, women ages 25 to 29 are more likely to carry HPV but less likely to have cancer, putting them at high risk for receiving a false positive on the new test. These women are then sent in for unnecessary follow-up procedures that could do them physical harm and scare them away from returning to the gynecologist for their next check-up.

This extra risk to younger women should be evident from the clinical trial data. But because it included relatively few women ages 25 to 29 and only observed them for three years, the test’s ineffectiveness in this age group is hidden, the coalition says.

“The risks that come with this decision really affect younger women more than others,” said Anna Mazzucco, scientific advisor at the National Center for Health Research, who organized the coalition’s letter. “That’s why we’re so concerned that there were not enough data on young women. We really do not understand this decision.”

There are more than 100 known strains of HPV, and around 40 of them are transmitted sexually. Most show no symptoms and are incredibly common, especially in women, but a handful of them can cause cervical cancer. When these strains of HPV infect cervical cells, they can cause those cells to grow abnormally and, over 10 to 15 years, those abnormal cells can develop into cancer.

Most HPV viruses, however, clear up on their own within two years. By the time a woman reaches her thirties, most of the strains collected in her sexually active twenties should have resolved themselves. The viruses that stick around for more than a few years are the ones to worry about; those are the ones that have managed to escape her immune system and continue to drive abnormal cell growth.

A Pap smear can detect those abnormally growing cells at a very early stage, when they are growing strangely but are not yet cancerous. That is why both cancer deaths and diagnoses went down after its introduction.

The cobas HPV test, on the other hand, detects the 14 strains of HPV that present the highest cancer risk, including two strains (HPV-16 and HPV-18) that alone cause around 70 percent of cervical cancers. Like the Pap smear, it relies on a swab of cells from a woman’s cervix. But instead of identifying precancerous cells, it detects the DNA of these cancer-causing viruses.

Roche compared its test with the standard in its clinical trial by taking cervical swabs from some 40,000 women, and sending each sample for both a Pap smear and cobas HPV test. Around 10.5 percent of the women in the study, ranging from age 25 to greater than 50 years, were positive for HPV, while 6.4 percent had an abnormal Pap smear. Women who tested positive with either method received additional screening to confirm whether they really had precancerous cells or if it was a false positive. When the results from all ages were pooled, the cobas HPV test was able to identify more women with early signs of cancer, according to Roche’s data.

The data Roche presented to the FDA did not break down the results by age, but there is reason to be concerned that young women were not well represented. Despite their increased risk, only 16 percent of the women were ages 25 to 29; compare that to the 54 percent of women older than 40 years. And those younger women tested positive for HPV almost twice as frequently: 21.1 percent versus 11.6 percent of women 30-39 years old.

Will a test for HPV still be a good test for cervical cancer as more women are vaccinated for high-risk strains? We don’t know because less than two percent of women in the trial were vaccinated.

In which case, we’d want to know how many of those young women actually went on to develop cancer, and how many of the HPV cases cleared up on their own. But the trial only lasted for three years, which is not long enough to know. Most cervical cancer takes 10 to 15 years to develop, so Roche never detected full-fledged cancers, just different stages of precancerous growth which might never lead to cancer.

There’s an argument that sending some women for extra treatment who don’t need it is a small price to pay if it means catching more cases of cancer overall. But this disregards the harms of excess screening and unnecessary care, the coalition argues.

One risk of the further screening for cervical cancer is fertility damage. While the second tier of cervical cancer testing after a Pap smear or HPV test is harmless, the next stage—a tissue biopsy—can weaken the cervix. A weaker cervix can lead to trouble in future pregnancies, such as causing early labor or, in the worst case, a miscarriage. “If you start sending more women for [follow-up screening], that stacks the odds for more aggressive treatment than she actually needs,” said Mazzucco. This affects younger, pre-menopausal women more than others, since they still have a future of childbearing ahead of them.

The second and perhaps more pertinent risk is anxiety. After a woman gets an abnormal Pap result, the following period of not knowing if she has cancer can be very stressful. A 2003 survey found that 59 percent of women experienced anxiety after an abnormal Pap, with that anxiety affecting daily life for 30 percent. If the mere presence of HPV is enough to signal cancer, these anxious periods will be more frequent—possibly making women dread going to their annual checkups at all.

“There’s a lot of research that says: the major population of women who actually get cervical cancer are women who have never had a Pap smear or haven’t had one in the last five years,” Mazzucco said. “We feel that [using the cobas HPV test as a primary test for cervical cancer] could reduce the number of women who get screened, which is not going to prevent more cases of cervical cancer.”

Additionally, the trial did not include many women who had been vaccinated for HPV—a growing cohort in the U.S. as teens who were vaccinated reach adulthood. (The vaccine had been administered to 56 million young women in the U.S. as of 2012.)

Will a test for HPV still be a good test for cervical cancer as more women are vaccinated for high-risk strains? We don’t know because less than two percent of women in the trial were vaccinated.

Another concern is that, while HPV causes most cervical cancers, it doesn’t cause them all. According to a 2014 survey, some 9.4 percent of cervical cancers are unrelated to HPV, while 3.2 percent are caused by rare types of HPV that aren’t detected by the test. If the cobas HPV test is used alone, those cases of cancer would fly under the radar.

That’s why, ideally, the cobas HPV test and the Pap smear would be paired together in women older than 30, says Mazzucco. They can be used on the same cervical swab, and the FDA has already approved them to be used together. A positive HPV test with a negative Pap would delay additional invasive procedures, while a positive Pap with a negative HPV test would call for further follow-up. But the HPV test should never be used as a diagnostic tool for cancer in women younger than 30 years, she says.

Luckily for the concerned parties, the FDA doesn’t tell doctors what to do. Instead, major medical societies, such as the American Congress of Obstetricians and Gynecologists, will use the approval information to develop guidelines for how these tests should be used in practice. Despite the FDA approval, they could decide to not promote use of the cobas HPV test alone to test for cervical cancer. “Primary HPV testing does not replace the Pap test, and it is extremely unlikely that doctors will stop using the Pap any time soon,” wrote the Society of Gynecologic Oncology in a statement after the cobas HPV test approval.

So what does this mean for you? When you’re going to the gynecologist, ask questions. If your doctor takes a cervical swab, find out what kind of testing she’s doing—a Pap smear, HPV test, or both. Walk through the different scenarios, informed by your own sexual behavior, to help you prepare for what a positive result on the tests would mean and the next steps you’d take. If you’re sexually active and have a positive HPV test, ask for a Pap smear as well so you have as much information as you can get.

The most important thing is to just keep going in for testing. Start in your twenties so that you get used to the process and it feels less stressful. It can be easy to panic if you get a positive result, but keep in mind that on average it takes a decade for that HPV strain or abnormal Pap result to develop into cancer. If you get tested regularly and find it early, you have already done the best you can for yourself.

LadyBits is a collective of tech-savvy writers, editors, and innovators breaking through barriers in the journalism industry.