What Are Genetically Recoded Organisms?

Researchers have developed a new kind of genetic engineering that may be safer, with the power to make never-before-seen types of protein. 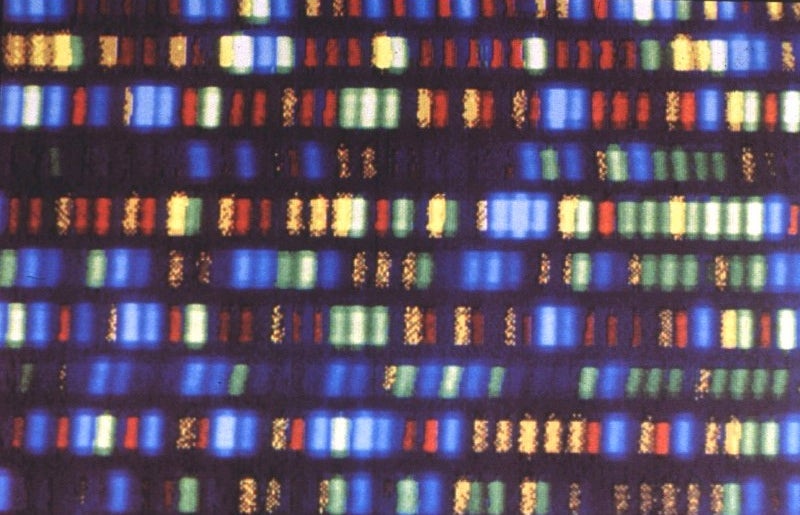 On a genetic level, all of life on Earth speaks the same language. We’ve all got DNA and/or its close cousin, RNA. All of our genetic material is composed of the same batch of basic nucleotides, which are often called by the first letters of their full names—A, C, G and T for DNA; A, C, G and U for RNA. All cells on Earth even read those letters in much the same way, so cells from different species are often able to read each other’s DNA. That’s how pharmaceutical companies are able to put the human gene for insulin into bacteria and yeast to produce insulin medicine for diabetics. Want see a gross example? Early in the history of genetics, some biologists put the human gene for eyes onto a fruit fly’s leg… and the fruit fly’s cells made a fruit fly eye.

Now, however, a team of scientists from several U.S. universities has found a way to make small, but fundamental changes within that cellular language. It’s an entirely different kind of genetic engineering than scientists have ever done before.

“For the first time, we’ve created an organism with new or alternate code,” Farren Isaacs, a Yale University biologist and one of the lead scientists in the research, tells Popular Science.

“It’s like writing a new operating system,” says Danielle Tullman-Ercek, a bioengineer at the University of California, Berkeley, who was not involved in the research. In contrast, she compared previous genetic engineering to “adding a new piece of software.”

In traditional genetic engineering, scientists put entire genes — coherent strands of hundreds of nucleotides — into cells. Often they don’t mess with the cell’s own original genes at all. In contrast, Isaacs and his team made small, specific changes in E. coli‘s own native DNA.

This new kind of genetic engineering could help solve two major problems in the field. It could make bacteria more resilient against infections, which is great for companies churning out vats of engineered bacteria. That includes companies that try to grow bacteria engineered to make biofuels, or to gobble up pollution. (Yes, bacteria get infections, too!)

It could also make engineered stretches of DNA impossible for other cells to read, mitigating worries that engineered genes could escape into the environment and into wild organisms. This is no small concern: Just this August, a team of biologists showed genetically modified rice is able to transfer its modified genes to nearby weeds.

A new kind of GMO: the GRO

Isaacs and his team have coined a new term for their genetic code rewriting. They call it “recoding” and its results “genetically recoded organisms,” or GROs, which Isaacs says is a subset of genetically modified organisms, or GMOs.

The changes Isaacs and his colleagues made don’t seem like much, if you count them up. The scientists changed 321 individual nucleotides in the E. coli genome, which has about 4.5 million nucleotides. They also removed the cell’s ability to make one particular protein.

Nevertheless, in a series of experiments, Isaacs’ team showed these small changes allow the E. coli to do two major new things.

In one experiment, the team gave their GRO E. coli two types of viruses. Viruses normally hijack a cell’s machinery to reproduce themselves. However, the GRO E. coli‘s machinery was so different, one of the viruses had trouble infecting the bacteria. The other virus infected the E. coli normally. Further re-coding to the E. coli genome should make the bacteria more unreadable—and therefore more resistant—to more types of viruses, says Julius Lucks, a Cornell University bioengineer who was not part of Isaacs’ team.

In another experiment, Isaacs and his colleagues added machinery to the E. coli to get it to make proteins with components that don’t exist in nature. Normally, proteins in living things are composed of different combinations of the 20 natural amino acids. Scientists have worked for years to create unnatural amino acids, or NSAAs (non-standard amino acids). They’ve gotten cells to make proteins with artificial amino acids, but it’s an inefficient process. Isaacs and his colleagues got their E. coli to churn out a 21st amino acid efficiently and effectively. The changes they made to the E. coli‘s DNA happened to remove one of the natural processes that previously interfered with the production of unnatural amino acids.

Unnatural amino acids are useful because they allow scientists to create proteins with entirely new functions. The proteins can then go into medicines or industrial chemical reactions. Isaacs gave an example of one company, Ambrx, that makes medicines with artificial amino acids.

In addition, because the coding for the 21st amino acid is in this altered genetic language, other cells shouldn’t be able to read it. That reduces the possibility that wild bacteria or plants could pick up the gene for the 21st amino acid and start producing it on their own. “You can imagine that that’s effectively a safe GMO,” Isaacs says. Isaacs and his team did not test this aspect of their GRO, but other bioengineers Popular Science talked with say it would be nearly impossible for a non-GRO to exchange genes with a GRO.

Although numerically, the changes in GROs are few, Lucks calls GROs “a huge breakthrough conceptually.” “It really opens the door for the complete rethinking of the genetic code,” he says.

Isaacs and his colleagues published their work today in the journal Science.