A Moving Model Of Our Solar System Made Out of LEGO 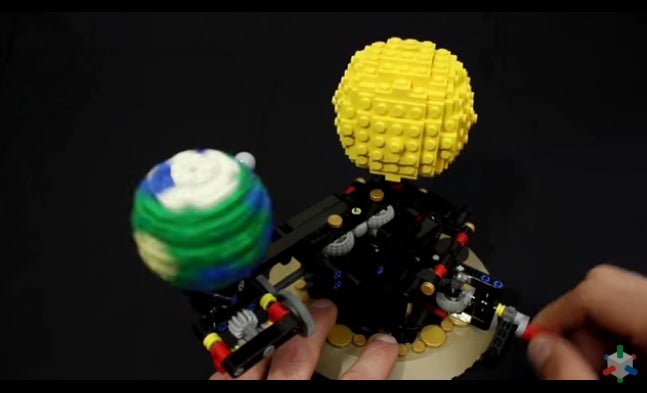 Now you can not only have the whole world in your hands, you can have the Moon orbiting the Earth, orbiting the Sun. Jason Allemann of JK Brickworks designed a working orrery, a partial model of the solar system, out of Lego bricks. The movements of the mechanical Lego model can be controlled by a hand crank or a small motor.

Alleman calculated the turning of the gears so that the movement of the miniatures is just about accurate. The Earth spins on it’s axis, mimicking each day. The moon orbits the Earth once every 28 “days”, and the Earth-Moon system makes a full rotation around the sun once every 375 days, slightly more than the 365 (or 366) day years we normally have, but still really impressive for a model made out of Legos.

If you want to build it yourself, the model plans are available on the JK Brickworks website.

Mechanical orreries have been around for hundreds of years, used to map out the motions of the Earth, Moon, Sun, and other planets in relation to each other.

The Lego orrery and the older clockwork orreries may be able to keep the timing of the celestial orbits accurately (or almost accurately), however they are vastly off in terms of scale. Models of the solar system that are to scale require vast amounts of space.