Newton, Darwin, and all your other favorites 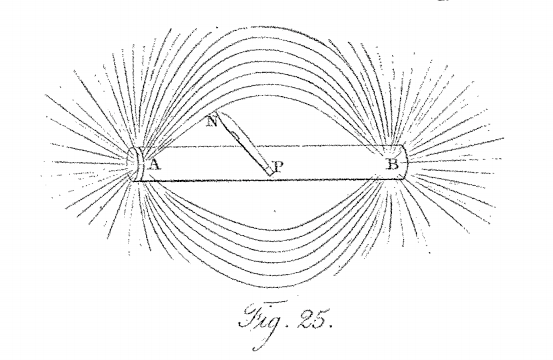 Working with direct current and magnets, Michael Faraday established the basis for our understanding of electromagnetism. The paper from which this sketch is captured discusses his research on induction, as well as electromagnetism. It describes in detail his construction of a gigantic induction helix out of 406 feet of copper wire and a battery with 100 pairs of 4-inch contact plates. It is kind of fun to realize that his paper uses the term Ampere not as an SI base unit, but to describe his predecessor and fellow electricity researcher, André-Marie Ampère. Royal Society
SHARE

On many a college campus are inscribed somewhere or other the words of Isaac Newton, who in 1676 said, “If I have seen further it is by standing on the shoulders of giants.” Among those raising his stature you could probably count the people who took the young math prodigy seriously, and decided to publish his work on things like calculus and optics. The Royal Society, the world’s oldest academic publishing institution, was the first to do so. And now their entire archive is online for free, dating back to 1665, so you can see Newton’s writings just as the world first saw them.

The Royal Society just uploaded every article older than 70 years, and the entire collection is searchable online. Along with Newton’s first research paper, the Philosophical Transactions of the Royal Society contain roughly 69,000 articles, including original research by Robert Boyle, William Herschel, Joseph Lister, Michael Faraday and others; Benjamin Franklin’s famous kite-lightning experiment; bizarre accounts of students hit by lightning; and ruminations on what Moon Citizens would glimpse as they looked at Earth, among many other tales.

“If all the books in the world, except the Philosophical Transactions, were to be destroyed, it is safe to say that the foundations of physical science would remain unshaken, and that the vast intellectual progress of the last two centuries would be largely, though incompletely, recorded,” as Thomas Henry Huxley wrote in 1870.

Just for fun, you can set up notifications for when a correction is published, so you’ll be among the first to know if someone ever disproves the Newtonian theories of motion.

We have culled a few samples for your review, which you can enjoy by clicking the photo gallery. If you want to search for yourself, visit the Philosophical Transactions archive.

An excerpt of Sir Isaac Newton’s description of the light spectrum. The Professor of Mathematicks’ first published paper declares that light is “not Similar or Homogeneal, but consisting of disform rays, some of which are more refrangible than others; and Colors are affirm’d to be not Qualifications of Light, deriv’d from Refractions of natural Bodies (as ‘tis generally believed); but Original and Connate properties, which in divers[e] rays are divers[e].” In this paragraph, he explains studying sunlight through a triangular prism of his own design. 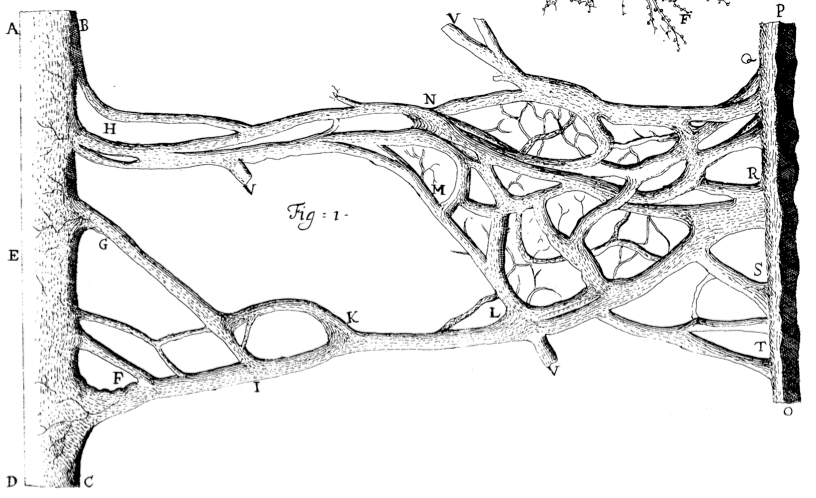 Lamb Spleen As Seen With a Microscope, 1706

Anthony van Leeuwenhoek, who used microscopes to discover bacteria, protists and the structure of red blood cells, held a 50-year correspondence with the Royal Society. His letters, written in Dutch, were translated into English and reprinted. In 1706, he submitted this picture depicting a microscope image of a section of a lamb’s spleen. He notes that it was not easy to see the small, fibrous structures with the naked eye, so he put them under a microscope and induced the collaborating artist to look at them. “We saw how each of the three said Branches, with those Parts thereof that I call Roots, were proceeding out of the Membrane,” he writes. “The Painter said to me, that he had never in his life saw more Roots with his naked Eye growing out of a Tree that was thrown down with the Wind, than he saw in this Figure.” 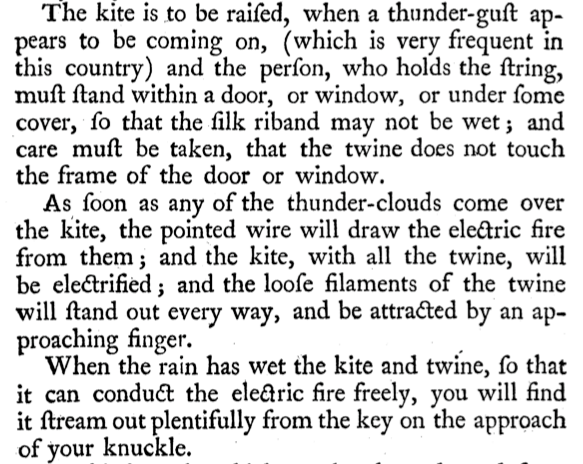 The Founding Father describes his infamous kite experiment in a 1752 letter to the Royal Society. The key paragraphs here describe how to shelter the experimenter and the kite’s silk ribbon from the rain whilst exposing the homemade kite to a thunderstorm. We recommend that you do not take Mr. Franklin’s advice and try it for yourself.

Working with direct current and magnets, Michael Faraday established the basis for our understanding of electromagnetism. The paper from which this sketch is captured discusses his research on induction, as well as electromagnetism. It describes in detail his construction of a gigantic induction helix out of 406 feet of copper wire and a battery with 100 pairs of 4-inch contact plates. It is kind of fun to realize that his paper uses the term Ampere not as an SI base unit, but to describe his predecessor and fellow electricity researcher, André-Marie Ampère.

Astronomer William Herschel discovered the seventh planet on March 13, 1781, and for a while it went without a name. In a feat of unparalleled brown-nosing, he herein proposes naming it after King George III, who gave him an annual stipend so he would move to Windsor. “Georgium Sidus,” Latin for “George’s Star,” thereafter appears several times in the archives of the Royal Society, until one of his colleagues suggested the name Uranus. Georgium Sidus held on until 1850, when the last holdout, HM Nautical Almanac Office, officially made the switch. 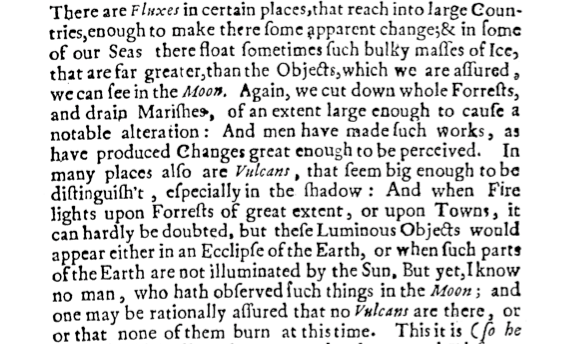 Author Monsieur Auzout waxes philosophical regarding the view of Earth from the moon and vice versa. By the 1660s, humans had already made great changes to their planet — cutting forests, draining marshes, etc. — and surely this could be seen from the moon, Auzout writes. Volcanoes must also be clearly obvious, he adds.   But when he looks through his telescope, he sees no such distinguishing features on Earth’s satellite. Perhaps the oceans are all on the far side, he muses; maybe this is why the moon does not turn on its axis the way Earth does. There is also a suspicious lack of volcanoes. “One may be rationally assured that no Vulcans (volcanoes) are there, or that none of them burn at this time.” 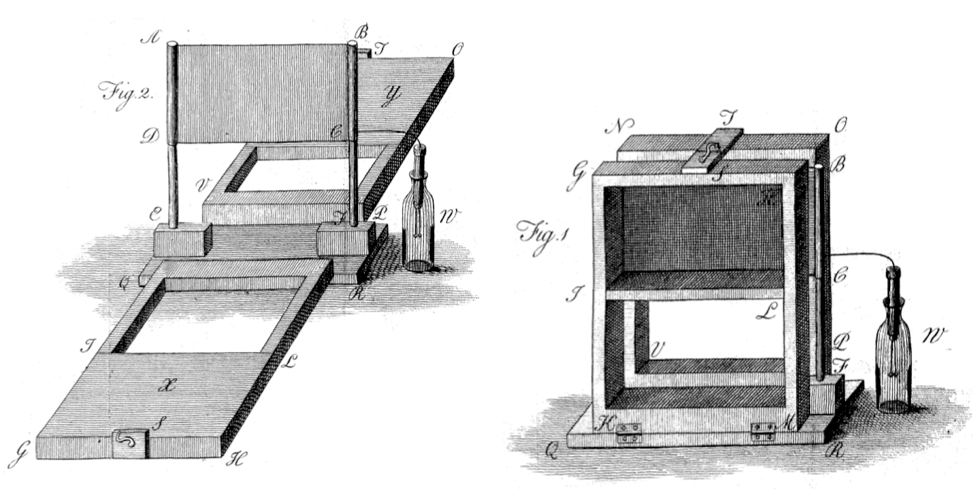 Henry Cavendish, who discovered the properties of hydrogen, spent much of his career studying “airs,” including reactions of varying gases. He was interested in phlogisticated substances, which supposedly contained phlogiston, allowing them to burn in air. This theory was eventually rendered obsolete, but not before interesting experiments involving this contraption, with which Cavendish introduced air into a bent tube. 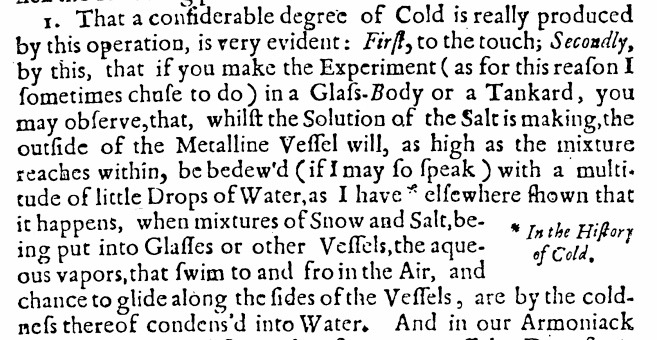 This paper is titled “A new Frigorifick Experiment shewing, how a considerable degree of Cold may be suddenly produced without the help of Snow, Ice, Haile, Wind, or Niter, and that at any time of the year.” The author describes manufacturing “Infrigidating mixtures” with the use of several ingredients, including Sal Armoniack, which we are guessing is Sal ammoniac, or ammonium chloride. He promises that the reaction will make the vessel turn cold, which you can see because the vessel will “be bedew’d (if I may so speak) with a multitude of little Drops of Water.”
history