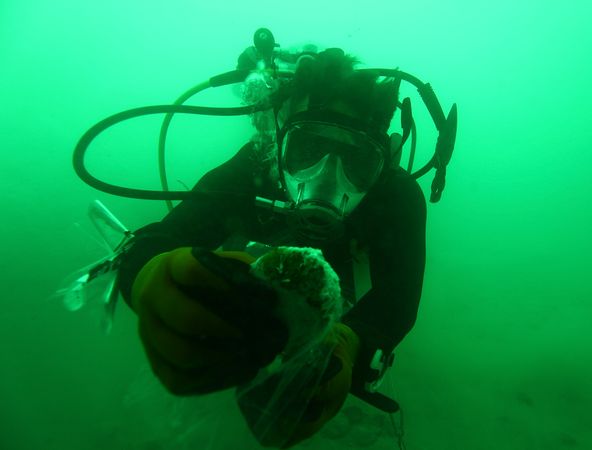 Deep in the depths of the Dead Sea, new life has been discovered. Thanks to newly found freshwater springs, certain forms of bacteria thrive, bacteria that, unlike other known freshwater and saltwater bacteria, can cope with rapidly changing salinity. It’s the intriguing results of the first study of the Dead Sea in years, a rare undertaking partly because “accidentally swallowing Dead Sea salt water would cause the larynx to inflate, resulting in immediate choking and suffocation.”

When the Jordan River’s entry into the Dead Sea was cut off in the 1950s to provide more fresh water for Jordan, the sea’s main source of fresh water was cut off. Ever since, the Dead Sea has been getting deader and deader, as far more water evaporates than is fed back into it (the sea’s water level sinks by about four feet every year). But the high and fluctuating salinity of the Dead Sea leads to all kinds of weird bacterial developments, as in the algae blooms of 1980 and 1992 that turned the sea red. Just this past week, researchers from Ben-Gurion University of the Negev released the results of a study that shows two major findings. First, there are freshwater springs deep in the craters on the floor of the Dead Sea. Second, there are huge mats of thriving bacteria down there–and the researchers have never seen bacteria that can survive in these conditions before. (They’re not aliens, though. That’d be crazy.)

More complex animals like fish, amphibians, and marine snakes can’t survive in the Dead Sea. But mats of prokaryotes, mainly in the domain Archaea [note: this was misidentified in previous versions of this article, thanks DNALX], survive in the freshwater-spouting craters. Says National Geographic: “The top of the springs’ rocks are covered with green biofilms, which use both sunlight and sulfide—naturally occurring chemicals from the springs—to survive. Exclusively sulfide-eating bacteria coat the bottoms of the rocks in a white biofilm.” There’s no record of this kind of bacteria ever surviving in this kind of condition–saltwater bacteria of this type can’t survive in freshwater, and vice versa, yet here’s bacteria that survives in both.

More studies will be undertaken, though it’s not an easy place to dive: buoyancy is a major struggle, and the high salinity is extremely dangerous for humans (aside from that whole “inflated larynx leading to immediate choking and death” thing, it also “burns and likely blinds the eyes”). Still, the researchers are planning for another trip in October to further study this bacteria. Check out video of the dive below.