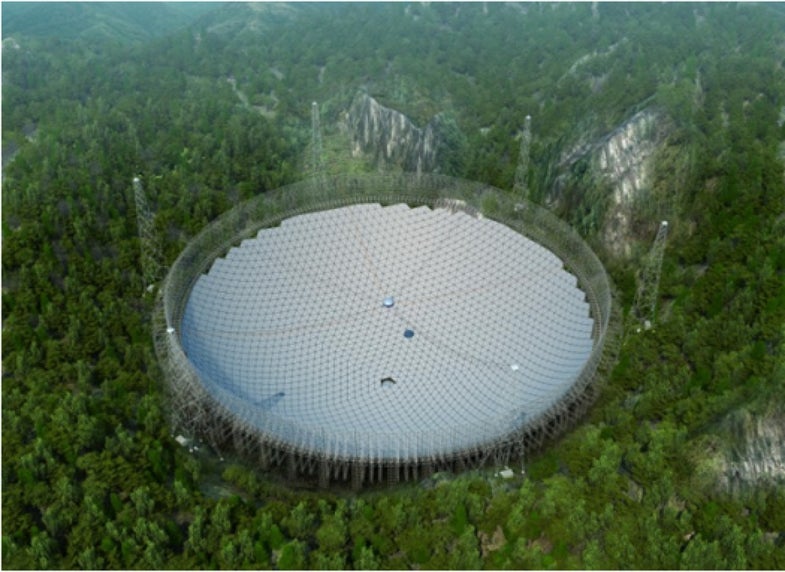 The Chinese government plans to start constructing the world's largest single-aperture radio telescope this year. One of the giant device's uses will be to search for extraterrestrial life. arXiv
SHARE

Make way for astronomy. The Chinese government is asking more than 9,000 people to move from their homes to ensure that a giant radio telescope will be able to function properly.

The Five-hundred-meter-Aperture Spherical radio Telescope (FAST) is set to start operations this year as the largest single-aperture radio telescope on the planet, and will let researchers continue to search for life in the galaxy.

FAST will be around 650 feet larger than the current record holder, the 1000-foot wide Arecibo Observatory in Puerto Rico.

But its influence will extend beyond 500 meters. The Chinese government is relocating people living within 3 miles of the telescope, seeking to prevent electromagnetic interference with the telescope. Even small electrical objects like cell phones can create interference, preventing the telescope from detecting the very faint radio waves that it’s looking for. Here in the United States, astronomers took a slightly different approach. Instead of getting rid of the people, they banned wireless devices in the National Radio Quiet Zone, a 13,000 square mile area in West Virginia surrounding the Green Bank Telescope.

Though 9,000 might seem like a large number of people to be displaced, it’s small when viewed in the context of China’s history. To build the world’s largest hydroelectric plant, the Three Gorges Dam, China relocated more than one million people. And there has been a recent push to move 250 million people into newly-constructed towns and cities in an effort to urbanize.