A small, tightly woven network of companies, mostly banks, wields disproportionate control over the global economy, according to a new... 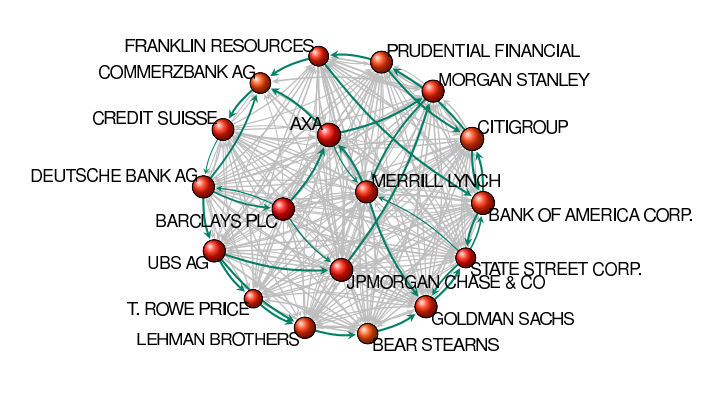 A small, tightly woven network of companies, mostly banks, wields disproportionate control over the global economy, according to a new study. To the thousands of protesters swept up in the global Occupy movement, it may seem like a case of science confirming the obvious. It’s based on a few extrapolations and assumptions that are open to debate, but the overall findings shed some light on the intimate ways 21st century capitalism works — and how those functions can undermine the entire system.

A trio of systems theorists at ETH Zurich examined the world’s 43,060 transnational corporations and studied their share ownerships, searching for commonalities that tie the companies together. They worked with techniques used to study complex systems in nature to construct a model of which companies controlled which other companies, and through which networks.

Ultimately, Stefania Vitali, James Glattfelder and Stefano Battiston identified a core of 1,318 companies with interwoven ownerships, each with ties to two or more other companies. They were connected to an average of 20 each, the researchers found. The network forms a “giant bow-tie structure,” with a small, tight knot in the middle and connections spanning outward in an increasingly nebulous pattern. The knot is very small and dense compared to the other sections, and the researchers dubbed it an economic “super-entity.” It is also very closely held — about three-quarters of the ownership remains in the hands of the core itself.

“Nearly [40 percent] of the control over the economic value of TNCs in the world is held, via a complicated web of ownership relations, by a group of 147 TNCs in the core, which has almost full control over itself,” the authors explain. Unsurprisingly, three-quarters of these companies are banks.

While the authors note that there’s no example of this core intentionally acting as a bloc — in other words, there’s no vast economic conspiracy — that doesn’t mean it can’t act that way. “Globally, top holders are at least in the position to exert considerable control, either formally (e.g., voting in shareholder and board meetings) or via informal negotiations,” they write.

They add that domestic anti-trade strictures prevent the core from acting as some kind of cash cartel.

Concentrated power in the hands of a few has clear implications for global financial stability — which everyone already knows, given what the world went through starting in 2008. But this study puts it in empirical terms. Further studies that build upon the assumptions made in this paper could potentially help policymakers and economists studying ways to stabilize financial markets.