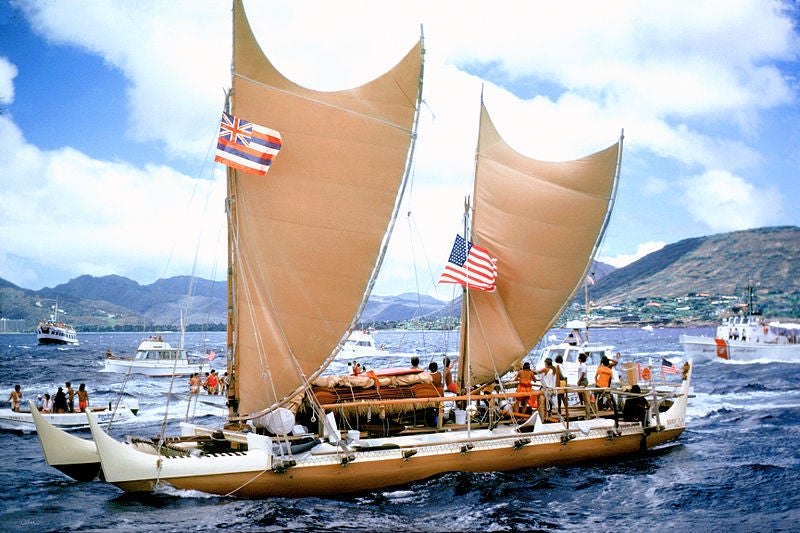 Hōkūle‘a arrives in Honolulu in 1976. Phil Uhl via Wikimedia
SHARE

In the 1970s the Polynesian Voyaging Society built and launched a Polynesian voyaging canoe with the intention of sailing it from Hawai‘i to Tahiti using only traditional techniques. The canoe, christened Hōkūle‘a, was piloted by Mau Piailug, a navigator from the Caroline Islands. The goal of the project was to show that, although no such voyage had been made for hundreds of years, ancient Polynesian voyagers had been able to navigate distances of more than 2,500 miles using nothing more than their knowledge of the wind, sea, and stars.

On May 1, 1976, the Hōkūle’a set sail from the island of Maui. Just before their departure, Mau addressed the crew, telling them how to behave while they were at sea. “Before we leave,” he told them, “throw away all the things that are worrying you. Leave all your problems on land.” On the ocean, he said, “everything we do is different.” At all times, the crew would be under the captain’s command: “When he says eat, we eat. When he says drink, we drink.” For three, maybe four weeks, they would be out of sight of land. “All we have to survive on are the things we bring with us…. Remember, all of you, these things,” he concluded, “and we will see that place we are going to.”

On board, in addition to Captain Kapahulehua and Mau, were Ben Finney, whose job it was to document the voyage, and David Lewis, who would make a record of Mau’s navigation. Tommy Holmes sailed as a member of the crew, with the particular charge of looking after the animals—a pig, a dog, and “the proper moa” (a chicken)— along with a variety of roots, cuttings, and seedlings, wrapped in damp moss, matting, and tapa cloth to protect them from the sea. Accompanying the canoe in case of trouble, and to keep the detailed record of their position that would later be compared with Mau’s daily estimates, was the sixty-four-foot ketch Meotai.

The primary navigational challenge was to keep the canoe far enough to the east as it made the long journey south. Hawai‘i is more than 2,600 miles north of Tahiti, but it is also about 500 miles west. The winds along the route are predominantly from the east—northeast above the equator and southeast below it. Add to this a westward-setting current and the problem was clear. “Our strategy,” wrote Finney, “was to sail as hard into the wind as the canoe would point without losing too much speed . . . and then to hold on to as much of that easting as possible.” The main worry was that when they reached the latitude of Tahiti, they would find themselves too far west and would then have to beat back into the wind to reach their destination.

One of the biggest unknowns was whether Mau’s navigational knowledge would be sufficient, given that the route was entirely unfamiliar to him. “A medieval Tahitian or Hawaiian navigator,” wrote Lewis, “would have possessed information about the Hawaii–Tahiti seaway exactly comparable to Piailug’s about his own and neighboring archipelagos.” He would have known the star path, the winds and currents likely to be encountered, and the distance typically covered in a day’s sail; he would be sailing, you might say, in his own neck of the woods. But Mau came from a completely different part of the Pacific, far to the west, where the sky and sea and weather patterns were all different, and his experience covered only some of the latitudes that would be traversed in the course of this journey. This last had significant implications for the navigation— the North Star, for instance, figures prominently in Carolinian navigation, but below the equator it can no longer be seen. Thus, once they crossed over to the Southern Hemisphere, Mau would lose an important celestial reference point. Part of Lewis’s job had been to help Mau fill in the inevitable gaps in his geographic knowledge, and one of the ways they did this was by visiting the planetarium at the Bishop Museum. There, using the star projector, they simulated the way the night sky would change as the canoe traveled from the Northern to the Southern Hemisphere. “Once this background was filled in,” wrote Lewis, Mau “laid down his strategy for the voyage—the etak (the Marquesas) and the star courses to be followed.”

Leaving the Hawaiian Islands, Mau steered east-southeast toward the rising point of Antares, “a red giant of a star” in the constellation Scorpius, known to Polynesians as “the Fishhook of Maui.” Finney watched Mau watching the sky and the sea, describing it as “a rare privilege” to see a master navigator at work. Thomas Gladwin, the anthropologist, had observed that Carolinian navigators remained continually alert during a voyage. “They say,” he wrote, that “you can tell the experienced navigators by their bloodshot eyes.” Mau, thought Finney, “looks the part,” almost never sleeping, just catnapping from time to time. “Most of the time he stands leaning on the deck railing, or sits perched atop it, checking the sea, the sails and at night the stars.”

Although some of those on board were experienced sailors— Mau, Kawika, Lewis, Finney—many of the crew were what are known in Hawai‘i as “watermen,” meaning surfers, paddlers, and lifeguards. They were good swimmers, strong and at home in the sea, but they had never crewed professionally or sailed long distances. Just six days out, one of them startled the relief captain by asking, “Hey, we almost there?” In fact, it would be more than three weeks before they saw land again. A long spell in the Doldrums with fitful, shifting winds and periods of glassy calm—the sea, as one recorder of the story put it, “smoothed to a vast skin of heaving mercury under a copper sun”—only aggravated the situation. One of the crew members became nearly catatonic, while others retreated into a sullen funk.

As they drew closer to their target, Lewis began to fear that they had been pushed too far west. But Mau seemed “calmly confident,” and on the thirtieth day of the voyage he predicted that they would reach the Tuamotus the next day. Not long after this, a crew member spotted some white fairy terns. Then the regular trade-wind swell faltered. “An island lies out there,” wrote Finney. “But which island? And how far away?” The next day, the Hōkūle’a made landfall on Mataiva, at the extreme northwestern edge of the Tuamotu Archipelago, less than two hundred miles north of Tahiti.

Hokuleʻa arrived in the Tahitian capital of Papeete on the morning of June 4. Unbeknownst to the crew, who had been out of radio communication with the rest of the world, the Tahitians had been avidly following Hokuleʻa‘s progress, posting the canoe’s daily position on charts tacked up around the city and broadcasting updates in newspapers, radio, and TV. The Governor of French Polynesia had declared the day of their arrival a public holiday; schools and businesses were closed, and the harbor was filled with hundreds of paddling canoes, launches, and yachts. People had begun gathering at the harbor the previous night, and by the time the canoe arrived, wrote Finney, “they were everywhere, standing knee deep in the surf, surging over the reef, jammed along the shore, perched atop waterfront buildings and weighing down the limbs of shade trees lining the water’s edge.” More than 17,000 people—over half the population of the island—had come to witness Hokuleʻa‘s arrival. On shore there was cheering and the beating of drums, then as the canoe approached a silence fell over the crowd, and a church choir lifted up its voice in a Tahitian hymn of welcome composed specially for the day. The effect, as thousands joined in, recalled one eyewitness, was “spine-tingling.”

From Sea People: The Puzzle of Polynesia by Christina Thompson with permission of HarperCollins.