The Airport Of The Future Isn’t An Airport: It’s A City

And you don't need to be a passenger to visit 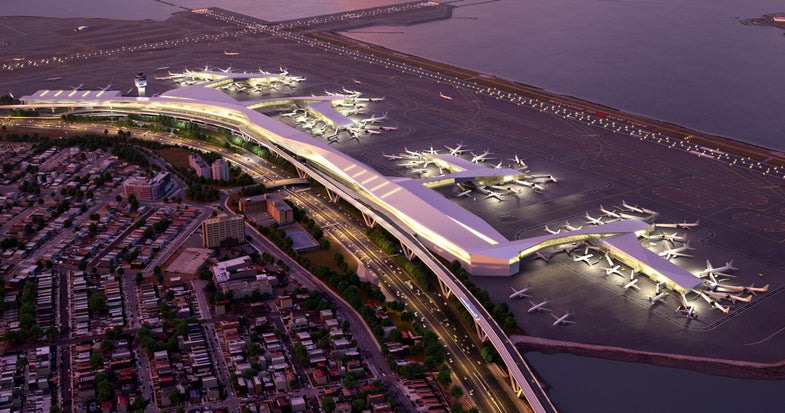 Customer service complaints, wasted hours, and extremely uncomfortable seats: Frequent and occasional flyers alike have a lot of problems with the status quo of air travel.

One of the worst examples of a frustratingly behind-the-times industry is New York’s La Guardia airport, a fixture of U.S. air travel since its official opening in 1953. La Guardia’s recently announced redesign may make accessibility easier and security faster, but widening existing bottlenecks in an inferior process may not be enough to keep up with the current progress in airport design. So what does the ideal airport of the future look like? It’s more complicated than a rudimentary set of improvements. Airports of the future may see changes not just in security procedures and technology, but in purpose within the communities they serve.

Let’s be clear: the United States has some awful airports, and La Guardia is consistently complained about. Lionel Ohayon, CEO and founder of the design group ICrave says that America has considerably worse airports because we’ve had airports longer than many other counties, and the age is showing in our designs. “We kind of have the worst airports in the world because we went through this 85 years ago when everyone was building airports in America. And now you have places where all this new stuff is happening.”

With that in mind, we asked experts in airport design and infrastructure where the future of air travel lies, and they saw an entirely redesigned user experience, and pointed to several key factors in making airports financially independent, user friendly, and reliably efficient.

“When we look to the passenger airport of the future, you kind of have to look at the passenger and the technology that will be made available,” says TJ Schulz, president of the Airport Consultants Council, a consulting firm for private businesses that have a stake in airport development. “I think what we’re going to see are attempts to really facilitate and automate the passenger processing experience.” He thinks getting through the checkpoint and check-in desks could be a thing of the past as self-serving kiosks can easily take their place.

Ohayon has focused particularly on one frustrating routine: bag checking. The process of carrying, dropping-off, checking, and picking up a bag could at least partially be done by the passengers themselves, which would streamline the experience, he says.

Schulz believes we’re already seeing some automation of bag check procedures around the country, and airlines are going to keep seeking to cut out extra steps, like the agent. ”There will be opportunities for passengers to check their own bags rather than have to go through an agent at a desk,” he says.

The TSA itself may also help to streamline these processes, mostly with PreCheck. “Notwithstanding some of the challenges that have come up recently with PreCheck, I do expect that program to increase, and more passengers will be providing more of their personal information in order to get expedited screening,” Schulz explains. TSA has an idea for this process, which they call “screening at speed,” in which passengers walk through a checkpoint that has advanced technologies and screening equipment so passengers don’t have to stop and raise their hands.

None of this is confirmed or denied for La Guardia, however, as all of these efficiency increases are still essentially pipe dreams for American airports. La Guardia, unlike abstract conceptual airports of the future, has to be functional under the rules of current security procedures.

But the ability to be flexible is important. Both Schulz and Ohayon point to a rearrangement of the process, where security happens at the gate, not the entrance to the terminal. Schulz speculates that eventually passengers will even be self boarding, a process that is already in use at more than 30 airports across Europe. For the moment, though, many of them, including Air France and other airlines at Paris Charles de Gaulle, France’s largest international airport, still have attendants that stand by to help passengers through the various menus.

For self-boarding to occur, that requires more identification ahead of time for most passengers. “I think the biggest constraint to the desire for more automation is the security checkpoint,” says Schulz. “I think the TSA has a vision of having a sizable segment of the traveling population already vetted, so that they’re known entities, and offer, for the most part, no threats to the system.”

Already, LaGuardia’s sister airport, JFK, has made some of these improvements. Its new Delta terminal houses several iPad-based restaurant sites that allow you to sit and order food while checking flight times and surfing the web. Many airports around the world now allow you to check in and print boarding passes without meeting an agent face to face, unless you’re checking a bag. European airports are going so far as to add bag tag printers to the self check-in kiosks, which mean by the time you hand your bag off to an agent, all that’s left to do is check the weight and your ID. From a more creative side, Tokyo’s Narita airport’s new terminal is designed like an indoor track and its color coded according to the passengers’ desired direction: blue pathways for departures and red pathways for arrivals.

But beyond the security screening procedures and infrastructure that will create better access to the airport itself, the most important piece of the puzzle is commerce.

Those in the private sector of airport development agree that a better user experience means more comfort, which will include making both shopping and entertainment more available. That means the airport has to be designed less like a cattle processing line, and more like, well, its own city.

“I think city planning is a good place to start,” says Ohayon. “The airport as a city is something you’re going to see more and more thinking around.” He says that if you think about how much time people spend in airports and how much travel has become a part of our modern daily lives, the idea and purpose of what an airport is, “becomes redefined.”

Travelers frequently spend extra hours in airports, sometimes even overnight, when their flights are delayed or cancelled. So the potential for an in-airport hotel at La Guardia is promising, but the commerce and retail spaces that the new La Guardia airport would house have a lot to live up to if they want to be future-proof, and be able to support the airport itself.

“Airports are trying to do more to build a revenue base that’s not reliant on the federal government,” says Schulz, “and also not be so reliant on airlines that can be at your terminal and gone the next.” The way you will see it, he says, is through the whole airport experience. Much of that comes in the form of retail therapy for all flyers.

“Without fail you’re seeing much nicer, well portioned shopping opportunities, [and] much better quality restaurants that really speak to the local flavor of the area,” says Schulz. “They’re looking for opportunities for people waiting at gates to hop on an iPad and be able to order food from a restaurant down the terminal that’s going to be delivered to them.”

Ohayon says we’ve seen inklings of this model in other brick and mortar user experiences already. “If you think of a movie theatre…when I was a kid before you got into the theater there was a ticket ripped at the front door and if you wanted popcorn you had to be actually going to a movie. Now movie theaters are moving the ticket rip all the way back to the door of the theater itself,” he says. This allows them to open up their space to the public, moviegoers and non-moviegoers alike, and capitalize on that real estate. “They’re making a social kind of connection to all that space that they have,” he says. “You’ll be seeing the same things happen at airports.” The airport security will happen at the gate and all of those amenities will exist in a public domain.

“Airports want to become a destination,” says Schulz. “They want to see people travel out to the airports to go shopping, and we’re seeing that internationally. The middle east, Dubai, and others, they just have wonderful shopping.”

It’s a big leap in a city like New York to expect people to commute to the airport for retail, and likely not an honest concern for La Guardia, which is a significant distance from city center. “Many of us just want to get to where we want to go,” says Schulz. However, the efforts by airports to become more self reliant could likely be beneficial. That means that even if you’re not using an airport like a mall, you’ll still see improvements in the coming years to your own flying experience. A more self reliant airport can drop prices for airlines and keep more flights coming in and out.

But the idea that the thousands of arriving and departing passengers that frequent large airports per hour will find the experience a little more comfortable is a positive improvement.