Amazon’s New Bookstore Has All The Perks Of Its Website, But Without The Variety

Yes, it’s an actual bookstore; the real question is, should you go? 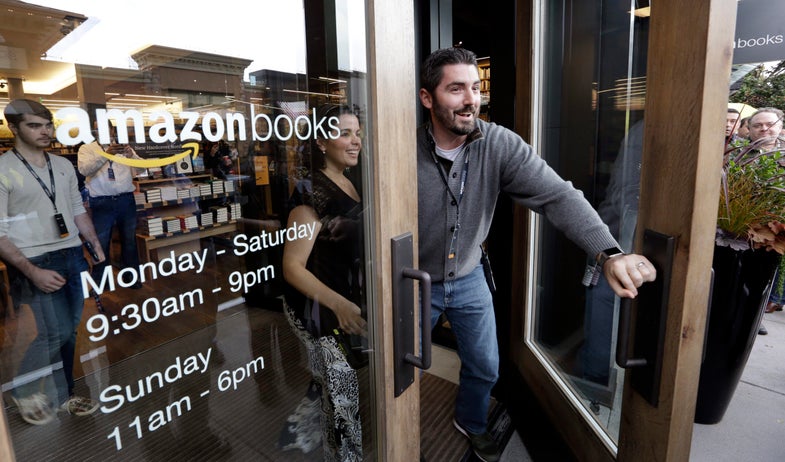 Employees smile as they unlock and open the door to the first customers at the opening day for Amazon Books, the first brick-and-mortar retail store for online retail giant Amazon, Tuesday, Nov. 3, 2015, in Seattle. The company says the Seattle store, coming two decades after it began selling books over the Internet, will be a physical extension of its website, combining the benefits of online and traditional book shopping. Prices at the store will be the same as books sold online. (AP Photo/Elaine Thompson). Elaine Thompson
SHARE

After playing a major role in the shuttering of thousands of American bookstores, Amazon has opened a bookstore of its own. Located in Seattle’s University Village, Amazon Books has the look and smell of a traditional shop. But given its online beginnings, as well as the current state of the US bookstore industry—in which the number of independent bookstores in the United States has declined by more than 50 percent in the past 20 years—does Amazon Books have the heart and individuality to succeed? I went on opening day to investigate.

At first glance, I was impressed. The space is warmly lit, open, and inviting. Tall, handsome shelves flank a center section devoted to Amazon’s devices: the Kindle, Fire, and Fire TV. As a reader of printed books, I mostly ignored this section and found myself drawn to the fiction shelves, where I discovered one of the store’s quirks: Every book faces forward, its cover prominently displayed—in direct contrast to the many spines that normally inhabit a bookstore shelf. Though this makes for an eye-pleasing shopping experience, it also vastly reduces the number of books that any single shelf can accommodate. If you’re looking for a lesser-known work by a prominent author, you’re likely to leave empty-handed. And if your tastes tend toward the obscure, shop elsewhere.

According to Jennifer Cast, the VP of Amazon Books, stocking its shelves with every book ever published has never been the company’s goal. In a statement published on Amazon’s site on Monday, Cast said that Amazon wanted its store to compliment its customers’ tastes: “…books in our store are selected based on Amazon.com customer ratings, pre-orders, sales, popularity on Goodreads, and our curators’ assessments…Most have been rated 4 stars or above, and many are award winners.” Though stocking shelves with only the most popular titles may be the most profitable way to run a bookstore, I found it to be rather shallow; bad books deserve real estate, too. The selection was curiously middle-of-the-road – better than what would be found at an airport’s Hudson Booksellers, but much worse than the selection an established indie, like The Elliott Bay Book Company in nearby Capitol Hill.

While the selection of books left me unsatisfied, the price definitely lived up to its Amazon-style promise. A paperback copy of Chimamanda Ngozi Adichie’s bestselling novel, Americanah, lists for $15.95. But here’s where the benefits of shopping with Amazon kick in. I grabbed a price scanner – they’re conveniently located throughout the store – and scanned Americanah‘s barcode. My price: $9.52, the same amount as if I was buying the book on Amazon.com. Per store policy, this pricing rule holds true for every book at the store. 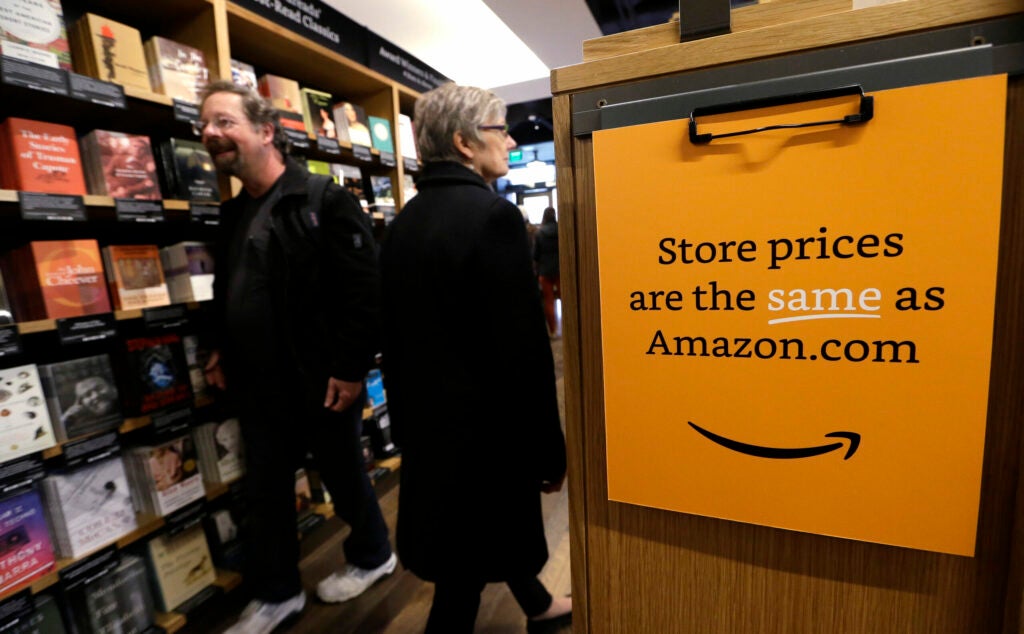 Amazon says its prices at the store will be the same as books sold online.

Whoever thought of making the store and site symbiotic deserves a promotion. Now, when you buy a book online, instead of imagining an overworked employee or robot in some cold warehouse – Amazon calls them “fulfillment centers” – you might picture an Amazon Books sales clerk strolling through the aisles, finding your book, and then packing it with care. It’s a nifty feat of branding, this website made flesh (or brick and mortar, if you’d prefer), and, for this reason, I wouldn’t be surprised if Amazon Books expands into other major cities.

Some of Amazon.com’s other features were also offered at the store. For example, just like at the Amazon-owned Goodreads, each book has a rating and review highlighted on an informational card beneath it. But for me, this feature fell flat. Since 2011, I’ve used the Amazon-owned Goodreads to track my reading habits, and I’ve been buying books through Amazon for way longer than that. On principle, though, I don’t rate books on either site. Because while I love John Williams’s Stoner, for example, giving it a good score – even a perfect five star rating – would feel slight. An enthusiastic, well-articulated customer review might encourage me to buy something, but the majority of the books I read come recommended by people I know outside of the internet.

Nevertheless, in a section devoted to staff favorites, I spotted a familiar name on one such card. Of Kazuo Ishiguro’s 1989 Booker Prize–winning novel, The Remains of the Day, Amazon’s Founder and CEO, Jeff Bezos, writes, “It teaches the dangers and sorrows of life regret better than any nonfiction book ever could.” I would’ve liked to ask Bezos about his bold claim, but I didn’t see him at Amazon Books on Tuesday. (Given his busy schedule, I’ll probably never see him there.) So while Amazon does give you one opinion of the book, it doesn’t really allow for dialogue. Even the most enthusiastic praise might not be enough for me to buy it. As such, I paid little attention to the cards.

As my visit went on, I noticed the store was becoming packed and loud, and a sort of fever filled the air. Feeling discouraged, I started to leave. But as I looked around, past the flashy shelves of book titles trying to grab my attention, I realized that I was surrounded by people who shared my passion for books—and I was being a grouch. I’d internalized much of the controversy surrounding Amazon, and this was preventing me from enjoying what is perhaps the main delight of any bookstore: To discover great books in a communal atmosphere. So before I left, I bought that paperback copy of Americanah as a souvenir of my first – and perhaps last – visit to Amazon Books. If you follow me on Goodreads, you’ll know when I finish it.