NASA And MegaBots Team Up To Build Giant Fighting Robots

And defeat the giant fighting robots of Japan 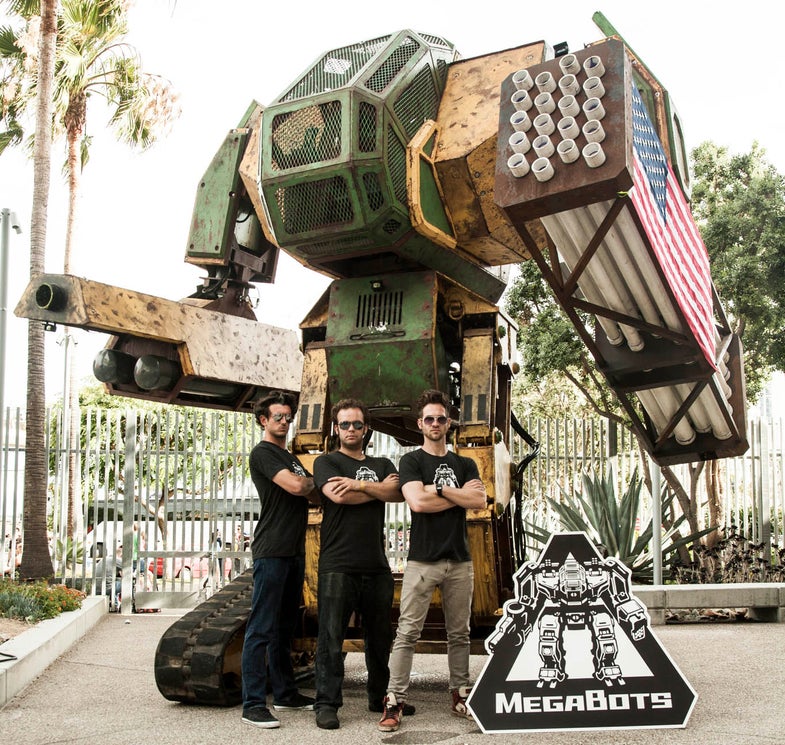 Just in case you forgot, Japanese giant robot makers, Suidobashi Heavy Industries agreed to a duel after being issued a challenge from American giant robot makers, Megabot. If you're looking for a paired costume set to do with a significant other or a friend, what could be better than dressing up as giant robots and challenging each other to duels all night long? After all, the human hand may have evolved just to punch other humans in the face (NOTE: Popular Science does NOT condone violence of any kind, except for duels between actual giant robots, not people dressed as them). MegaBots
SHARE

You might have seen MegaBots in the pages of Popular Science’s August issue. The company, headed by engineers Gui Cavalcanti and Matt Oehrlein, creates giant fighting robots. Its first prototype, the Mk. II, is 15 feet tall, lumbers along at just under 3 miles an hour, and fires giant paintballs from an arm cannon at 120 miles per hour.

Next July, an updated version of the Mk.II, kitted out with giant punching gloves and a 6-foot-long chainsaw, will engage in hand-to-hand robot with a 13-foot-tall Japanese robot. To prepare it for battle, MegaBots has recruited the likes of NASA and Howe and Howe Technologies.

Last month, MegaBots challenged Japan’s Suidobashi Heavy Industries’ Kuratas robot to a giant robot duel. Japan accepted, and now MegaBots is turning to Kickstarter to raise the $500,000 it needs to build a bolder, badder version of its giant fighting robot in order to defeat Kuratas. The Kickstarter campaign, which launched today, has already raised more than $78,000.

“The robot that you see on Kickstarter is the ultimate robot. It’s got bald eagles for shoulders,” Cavalcanti tells Popular Science. “It is like Team America’s robot. It’s a little silly, it’s a little campy, but it’s also totally epic and American.”

Instead of chasing investor cash to upgrade the Mk. II, Cavalcanti and Oehrlein decided to give Americans’ a stake in MegaBots’ future battle, which was the ultimate goal in founding the company in the first place. As the MegaBots crew told Popular Science, the impetus for constructing giant robots has always been to stage massive robot duels, and to promote such events as a new type of sport.

“For me, it’s proving to the world that this can be a thing—that giant fighting robots is a feasible business that can exist, that people’s dreams can exist,” Oehrlein says. “We’ve been spending this last year of our lives trying to convince people of it. Once we have this battle and people see it happen, and it looks awesome, it’s a little bit satisfying to be like, ‘I told you so.’”

But for the MegaBots’ robot to have any shot against Kuratas, it’ll need a significant amount of upgrading. The Mk.II wasn’t designed for hand-to-hand combat, a condition Suidobashi Heavy Industries insisted upon when agreeing to the duel with MegaBots. To get the Mk.II ready to do battle, MegaBots has recruited Howe and Howe Technologies and NASA, among other partners, to get its robot into fighting shape.

Howe and Howe Technologies will help build a high-performance track base for the MegaBot to make it faster and more maneuverable. On the Kickstarter page, MegaBots boasts that once this upgrade is complete, its robot will be five times faster than it is now and twice as fast as Kuratas.

NASA was recruited to improve the safety of the cockpit of the MegaBots’ new Mk.II robot. It’ll be Cavalcanti and Oehrlein sitting in the Mk.II steering the robot and manning the weapons. But should Kuratas land a punch—even one that knocks the Mk.II over—the MegaBots’ cofounders need to make sure the force of it won’t be so damaging that they’ll black out in the middle of battle.

“We’re planning on working with NASA to integrate technology that’s going to absorb the shock from the impact on the robot,” said Cavalcanti. “For us, the robot falling over will be a 5 to 10 miles per hour event. It’s a lot of force, [and] NASA has done the math on all that to develop ways to withstand that force.”

Depending on how much money the Kickstarter campaign raises, Cavalcanti and Oehrlein will not only upgrade the Mk.II, but they’ll also move into a new workspace to construct it. Currently they’re heading up MegaBots from a shared workspace in Oakland, but Oehrlein would like to see a MegaBots “supervillain lair” in Silicon Valley. As for Cavalcanti? He can’t wait for battle.

“The inner child in me is going crazy,” he said. “I can’t even describe what it’s going to be like in the fight. This is what I’ve been waiting for.”