We Tested SoundHound’s New Smartphone Assistant ‘Hound’ And Were Surprised 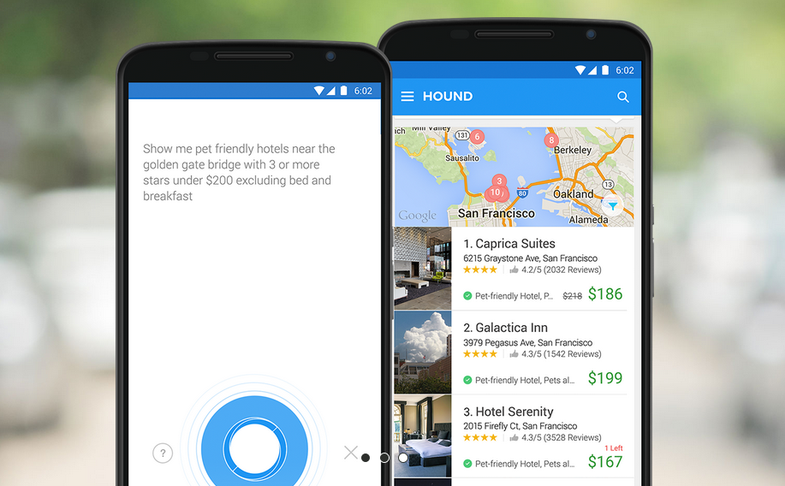 It’s not just big tech brands like Apple’s Siri, Microsoft’s Cortana, and Google Now that are battling to become the preferred digital assistant on your smartphone. Now Soundhound, a popular app for identifying songs, has launched its own personal assistant for Android, the aptly (if uninspiredly) named “Hound.”

I put Hound through its paces on an LG G Flex2, and found that while it excelled at some complex tasks, it failed some very simple tests.

Like Siri and Google Now, Hound works by using a smartphone’s receiver to listen to your voice and then analyzes it with software to try and understand what you’re saying. To get a baseline, I asked the simple question, “Where am I?”

Hound answered quickly with aplomb, telling me it found my exact location in a high, monotone reminiscent of a female version of Microsoft’s forgotten Sam voice (Microsoft Samantha?), while showing a street address and pin on a map.

The next question tested basic searching skills—something you could already do with any app like Siri or Google Now, “Who is George Washington?”

Hound pulled up Wikipedia and related articles, but more impressively, it read the first paragraph from Washington’s Wikipedia page. It’s a nice touch, but for those who don’t appreciate the extra chatter, the feature can be thankfully turned off by disabling sound in the settings menu.

Apple’s Siri can do the same thing, but asks if you want the text read to you.

Now we get to the meat of Hound—complex searches based on user-set factors. This took a couple of tries to get right. When I originally asked “Where can I eat lunch near me?” the app suggested a location 1.02 miles away—a far cry for a NYC lunch hour walk. But my second question, “Where’s the closest place to eat lunch?” sorted restaurants by distance.

After finding the closest places, I asked “What’s the cheapest, closest option for lunch?” and Hound ranked restaurants by lowest price based on Yelp listings, then sorted for distance and if they actually offered lunch menus.

When I asked Siri, she responded with Tina’s Cuban Cuisine, a lunch spot about a block and a half away. However, Hound found more than 10 options which were closer. Even as a native Apple user, I actually felt more at home in Hound’s interface, and got more robust results.

If you’re trying to live the high life, Hound can also sort by the highest price. I asked “Show me the most expensive hotel in New York City,” which returned The Mark (going for 2495 per night), along with the nine runner-ups.

Hound also integrated emailing capabilities, like you can already do with Siri and Google Now. You dictate who you want to send an email, and Hound allows you to dictate the message. From there, you have to continue in your chosen email application, but can ostensibly create most of the message within Hound. Google Now couldn’t recognize my last name.

The most troublesome aspect of the app came up when I tried setting basic meetings and messages. Before this, Hound took on complex tasks with relative ease. It understood my weird last name. It now understands how cheap I am. But when I tried to create a meeting with my co-worker Rebecca for 5:30, Hound gave me an event at 5:31 with the title “baca.” When I asked again, it made an event the current time with the text “five thirty meeting with rebecca.”

Hound’s menu touts its ability to translate spoken language in-app via Google Translate. But when I asked how to say “hello” in Mandarin (as the menu option suggests), it gave the “Chinese Simplified” characters, instead of a pronunciation. It didn’t even give a Pinyin readout, the standard way to transcribe Mandarin characters into the phonetic alphabet.

There are some other simple, yet intuitive things that the app does really well. Splitting a bill, for instance. While I wasn’t in a noisy restaurant to test it, I asked Hound to split a $99 check four ways. It split the check evenly, and even spit out some tax options. (However, the tax wasn’t individualized.)

Hound is also really good at telling you what it’s able to do. The home screen is a clear (and long) list of functions, which is appreciated. I could even pull up an image search for puppies, which was a personal favorite.

At the end of the day, Hound is a fully-functional personal assistant app that’s just as buggy as every other app like it. As with many of these apps, there’s a slight learning curve, but once I got the hang of what Hound wanted after a few initial tries, it was simple and easy to operate. Hound is impressive in its breadth, and is functional enough to be the stock voice command app in any operating system. Hound is restricted to devices running Android 4.0.3 and up for now, but Soundhound says an iOS version will be available “soon.”