Remember when a glass of wine a day was good for you? Here’s why that changed.

It all comes down to the way we used to study drinking. 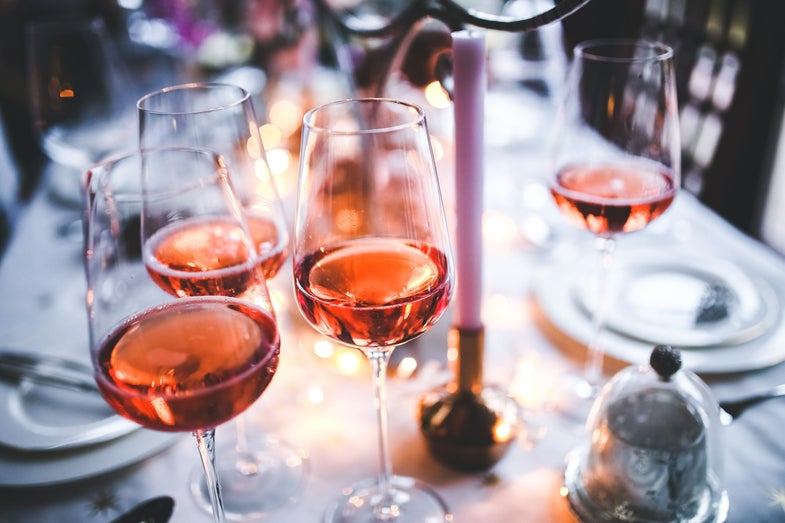 A recent study proclaiming that there is “no safe amount of alcohol” made a lot of headlines for, well, telling people that there’s no safe amount of alcohol. Many experts pointed out that the increased mortality risk associated with light drinking was tiny—so tiny as to be negligible—and they’re correct. We shouldn’t be freaking out about a miniscule elevation in likelihood of death.

But the hullabaloo raised another point: when did moderate drinking stop being good for us?

It wasn’t long ago that the court of public opinion held that a glass of cabernet with dinner wasn’t just okay for you, it was actively good for you. Yet it seems like opinion is shifting. Suddenly moderate drinking is unhealthy. What happened?

Tim Naimi, a physician and epidemiologist at Boston University School of Medicine and Public Health who’s studied this subject for many years, says he isn’t sure why public perception seems to be shifting now. “But there has been a strong surge of scientific work in the past decade that’s kind of thrown a wet blanket on the idea that a little bit of alcohol is a health tonic,” he says. That surge of scientific wet-blanket-ness has largely focused on two systematic errors that researchers like Naimi argue were messing up alcohol studies for many years.

Confounding: why non-drinkers shouldn’t be compared to moderate drinkers

Epidemiologists always have to deal with the issue of confounding, which is the idea that across a population groups will vary in ways unrelated to the variable you’re trying to study, and thus you must try to control for those factors. That’s a bit confusing in the abstract, so let’s take a classic statistics example.

If you were studying whether people who eat ice cream are more likely to drown than people who don’t eat ice cream (or eat less ice cream), presumably because you’re just very passionate about frozen dairy products and all of their implications, you would likely find a correlation. It might even be highly statistically significant. The problem is it’s also true that people eat ice cream more in hot places, and especially hot places next to water—think how much ice cream is available near your local beach or pool or lake. Eating ice cream doesn’t cause people to drown, but because people tend to eat ice cream in proximity to water, where they’re more likely to drown than on dry land, technically drowning is more common among frequent ice cream eaters. That’s confounding.

When epidemiologists study something like alcohol consumption and mortality, they control for a lot of potential confounders. Socioeconomic status, whether a person smokes, and obesity would all be examples of factors that might influence how likely someone is to die in a given period without actually relating to alcohol’s effects on the body. But those are the obvious factors. The less obvious, but no less confounding issue is why people who don’t drink choose to abstain from alcohol.

An analysis from 2007 by an international group of alcohol epidemiologists and addiction researchers, published in Annals of Epidemiology, notes that “as people progress into late middle and old age, their consumption of alcohol declines in tandem with ill health, frailty, dementia, and/or use of medications.” That decline means that, as people become less well—even if they’re not elderly—they will also tend to stop drinking. So when they enroll in a study on drinking and get lumped into the group of non-drinkers, they’ll artificially inflate the mortality risk—even though their deaths have nothing to do with alcohol abstention. It’s not that teetotaling made them more likely to die during the course of the study; it’s that being closer to death made them more likely to quit alcohol. And people who drink, but are able to keep their drinking at a reasonable level, are likely to have the kind of health and social advantages associated with living longer.

“In lots of observational studies, moderate drinking is associated with a lot of advantageous lifestyle factors,” Naimi explains. “People who begin to drink and can maintain regular drinking with small volumes are pretty well-adjusted people. I think a lot of the work people have done shows that people who are moderate drinkers are more educated, belong to country clubs, and drive nice cars. But does a little bit of alcohol cause them to do better in college or to drive a BMW? The answer is: not likely.”

But as the headline-generating study in The Lancet notes, “Until recently, most meta-analyses of alcohol consumption have not controlled for the composition of the reference category,” and that “subsequently, assessments of harm relying on these studies have been biased.” Even way back in the ’90s, prominent alcohol researchers were noting that “Non-drinkers or lifelong abstainers are unsuitable as a baseline group in studies of the effects of alcohol on morbidity and mortality.”

This is especially true for cardiovascular disease, which has long been the main purported health benefit of light drinking: it’s supposedly good for your heart. But like people who get older, people who develop heart problems and other risk factors for cardiovascular disease tend to decrease or entirely stop their drinking. A 2005 study in the American Journal of Preventive Medicine found that even after adjusting for age and gender, 27 of a total 30 heart disease risk factors were more common amongst non-drinkers, from obesity to low levels of education to physical activity. Epidemiologists can try to control for some of these, but there are simply too many factors that influence your risk of cardiovascular disease.

That 2007 analysis noted that “A systematic misclassification error was committed by including as ‘abstainers’ many people who had reduced or stopped drinking,” and when those researchers only looked at studies which had not committed this error, they couldn’t find any evidence of cardiac protection. This lead them to conclude that “the protective effect of alcohol for CHD may have been exaggerated in most epidemiological studies to date.”

If you are a person who started drinking around age 18-21 and has never had significant problems with it, it’s easy to imagine that everyone has that experience with alcohol. But that’s not true.

“People who in their teens or twenties begin to drink, don’t die or become alcoholics, and are able to maintain drinking at low levels—that’s a select group of drinkers,” says Naimi. And that means when epidemiologists go looking at people who are still moderate drinkers in middle age, they’re missing some key people. “If you look at people in midlife who are stable, moderate drinkers, that means they didn’t die from their drinking and they didn’t quit drinking.” That sounds obvious, but let’s take a second to think about it: Alcohol is an addictive substance. People who have had a healthy relationship with it their entire lives are probably people who also have a bunch of other advantageous qualities.

Take a population of people and assume that the vast majority start drinking at age 21 and a small proportion don’t even start. Those are the never-drinkers. At this point, everyone else begins drinking a little bit because none of them have built up a tolerance. Some will immediately begin drinking more heavily, whether for social, societal, or genetic reasons. There’s some variation in exactly how much they drink, but it’ll be more than moderate. Some will start off light, but will eventually start exceeding the “moderate” amount of two or fewer drinks per day. Others will become full-blown alcoholics. Finally, the last group will be the people who drink moderately for their whole lives.

If we later enroll that whole population in a study starting at age 40 or 50, the only remaining moderate drinkers will be that last group. Everyone else will either be a never-drinker or a heavy drinker—or, unfortunately, they’ll be dead. “More than one-third of all deaths from alcohol occur before age 50,” explains Naimi. “That’s typically when people enroll in these cohort studies, but that’s when people who die from alcohol have been picked off.”

This is selection bias: we’re selecting for a group of moderate drinkers who are unusually healthy.

Cancer and other problems: why a heart benefit isn’t enough

There is still a chance that one or two drinks a day has some benefit for your heart. If it does exist, researchers like Naimi think it’s probably pretty small, and that matters because there are a lot of other diseases that we know alcohol increases your risk of contracting. These include liver cancer, breast cancer, colon cancer, oral cancer, tuberculosis, pancreatitis, cirrhosis and related liver diseases, and a whole host of others.

The recent headline-making study, which was published by a group of international researchers analyzing data from 195 countries in The Lancet, did find a small protective effect against heart disease and diabetes (they note this could be from residual confounding issues, as they could only control for age, sex, and location). But they also found that when they combined the risks for all 23 diseases they studied, drinking provided no protection from overall mortality. The calculated “safest” amount was zero drinks per day.

Of course, this doesn’t mean that drinking one beer a day was drastically less safe. In fact, it was mostly fine. Aaron Carroll in the New York Times noted that according to these numbers, for every 100,000 people who consume one drink per day, 918 will have an alcohol-related problem per year. But if the same 100,000 people drank nothing at all, 914 would still have one of those same problems. That’s only 4 more people per year (per 100,000) who will have a problem that’s attributable to alcohol—that’s tiny. But it’s also not zero. And it’s also the risk for light drinking. The average American consumes just under two drinks per day, though recent research suggests that we’re increasingly drinking in binge sessions (5+ at once), a much less healthy way to imbibe than spreading it out over a week.

You as an individual may look at those statistics and conclude that having one or two glasses of wine with dinner is totally fine, and you’re probably right. Even if you’re not, it’s your choice. You make lots of decisions that increase your risk of developing various diseases in small and large ways—maybe you eat a lot of red meat, maybe you’re regularly sleep-deprived, maybe you handle carcinogens for work, maybe you smoke a cigar once a year—and that doesn’t mean one of those choices is going to kill you. But public health researchers look at those statistics and think that though the risk is miniscule, they still shouldn’t be promoting alcohol as a healthy choice. The point is not that alcohol is so horribly bad for you, the point is simply that it’s probably not good for you. And that doesn’t mean you can’t enjoy a drink sometimes.

“It’s fine to say ‘I enjoy drinking,’” Naimi explains. “Why do you need to worry about whether it’s good for you or not? Why not just drink every once in a while and enjoy it?”