MIT researchers want to make a dumpling that can fold itself 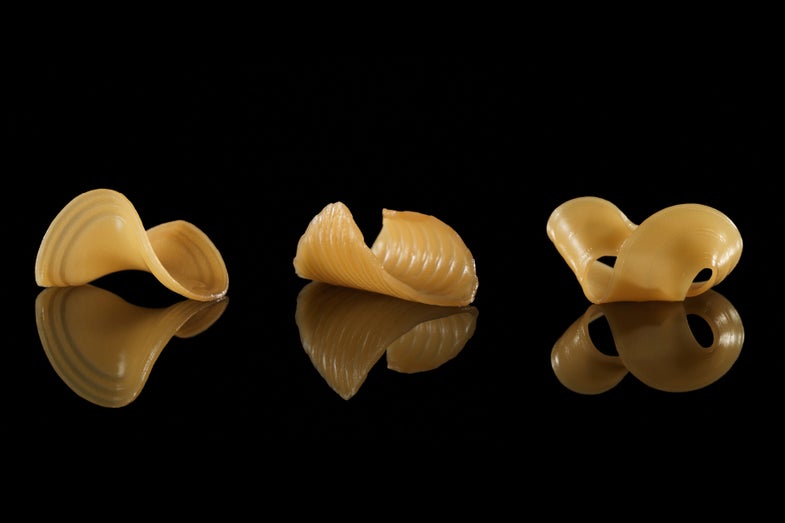 Any self-respecting pasta lover knows that the topography of a noodle is paramount to its enjoyability. Going with a light creamy sauce? Something long and skinny will do the trick. But a heavier cream calls for a shell to scoop up ample globs of gooey cheese. You’ll want something with a roomy tube shape, like a rigatoni, for a thick sauce rich with chunks of meat—it has enough space to promise you a mouthful of all the ingredients with each bite. And for a slippery, oily sauce like a pesto, you’ll want a pasta with plenty of curves, maximizing the spirally surface area on which your sauce can cling.

Thanks to new research from the Massachusetts Institute of Technology, we might one day be able to buy pastas that pack flat, then flip up into 3D shapes as soon as they hit water. In fact, we might even be able to design our own shapes at home.

The new food tech relies on the tendency of gelatin to absorb more or less water depending on its density. By designing multi-layered films made of gelatin and starch, the researchers from MIT’s Tangible Media Group made flat sheets that spring into predetermined shapes when moistened, bending this way and that because of different densities throughout their gelatinous surfaces. The team presented their findings this month at the Association for Computing Machinery’s 2017 Computer-Human Interaction Conference on Human Factors in Computing Systems.

Lining Yao, who lead the research while earning her PhD at MIT, estimates that by packing pasta in flat sheets instead of filling boxes with pre-formed shapes, manufacturers could cut packaging sizes in half—cutting down on wasted cardboard and shipping container space. But she admits that her team only came up with this practical application after the fact.

“I’d been working on adaptive materials for a long time, and I wanted to find a topic for my PhD that would make my MIT professors happy, and also make my mom happy,” Yao says. “And I thought designing a self-folding dumpling for my mom would be pretty cool.”

Yao and her team worked with local chefs to push the aesthetic applications of their concept, and created plenty of designs that look right at home in a molecular gastronomy setting.

Yao’s team has designed a number of intriguing shapes—ones that pop up into tubes, wrapping around caviar to produce tiny haute cuisine delights, noodles that slither off prettily to form separate pieces of pasta once dumped into liquid, and little edible blooming flowers, among other things—but dumplings remain out of reach.

“It turns out that’s really hard,” Yao says. “For a dumpling, you have to fold it once, and then make all these smaller folds on the surface to seal it. We can get there eventually, I think.”

She also notes that while her team did show that their concept could theoretically work on more starch-heavy mixtures, their current designs are mostly gelatin. That might appeal to the fancy dining crowds who might choose to nibble on tiny tubes of caviar and slithery, self-folding noodles, but it would likely be a tougher sell for folks looking for mac and cheese fixings at the grocery store. Yao hopes that the research, which was funded in part by Target Corporation’s Food + Future startup accelerator, can continue now that she’s moved on to a teaching job at Carnegie Mellon. In addition to figuring out trickier folds and getting a handle on how to program starch-heavy films, she’d like to play with ways to deliver these fun new shapes to the masses.

“We see this appealing to two distinct customer groups,” Yao says. “One is very high end, because our food is transformative in real time. It’s not hard to imagine diners wanting to watch these noodles be prepared. And the other direction is with companies like Target, where we could reach lots of people. Eventually, we could make a website where people could basically go in and choose a basic shape from our database, and then start to customize their own shape. We could really democratize noodle design.”