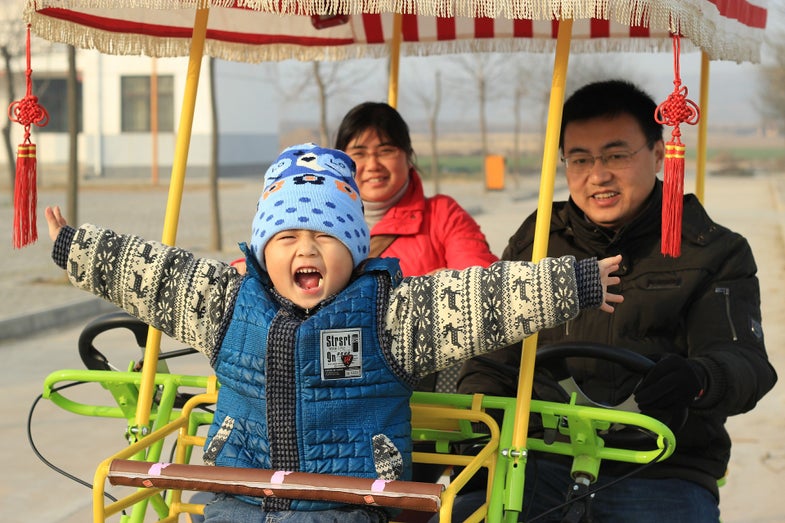 Chinese parents will soon be legally permitted to have two children if they want to, according to an announcement released today on Xinhua, the Chinese government’s news agency.

That’s a change from the controversial One Child Policy, implemented in 1980 and intended to limit the country’s exploding population growth and strain on resources. Officials estimate that in its 35 years, the policy has prevented 400 million births. That’s a significant number, even in a country with a population of 1.3 billion.

But the policy had a number of unintended consequences on Chinese society. First, there are now significantly fewer women than men—if a family was limited to one child, many wanted to stick to conservative values and bear a male heir, so many female children were killed or aborted.

Then, also, there’s the 4-2-1 problem. As the Chinese population ages—more than a quarter is expected to be over age 65 by 2050—an only child will have to care for his parents and, likely, his four grandparents as well. That could put a huge financial strain on the primary breadwinners and could cause further slowdown in an already sluggish economy.

Pundits suspect that ending the One Child Policy is a way to heal some of China’s social and financial woes. In 2013, the government added a few caveats to the policy that would allow some couples to have more than one child, but it didn’t create the surge in births officials expected. This policy shift is much more far-reaching.

Yet some experts think that allowing Chinese families to have two children is still too restrictive, and that the government shouldn’t be telling families how many children to have at all. Others note that this is hardly a panacea for China’s economic failings—a report from a Beijing-based security company states that making workers more productive and making legal allocations for the market to exert a stronger force on its economy would do more to stimulate financial growth, the L.A. Times reports. And it will take a while for the demographics to reflect this change, as single-child households are still the social norm, one demographer tells the Guardian.

Despite these concerns, many experts believe that the Chinese population will welcome this shift. The Chinese government is expect to release details about the policy’s implementation soon.